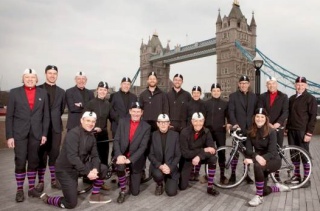 On their way.
(Photo: Greg Bartley/Portland to Portland)

At the end of this month, Portland will be invaded by members of what London Mayor Boris Johnson recently proclaimed as, “a stonking charity initiative.” He was referring to Portland to Portland, a group of British architects, planners, and designers who plan to ride 4083 miles from Portland Oregon to Portland Place London to soak up cycling solutions.

The 14 riders (2 women and 12 men) have one goal for their journey: To learn how cities are responding to the urban bicycling renaissance, or what they’ve coined as the “cyclization” of transportation. In each of the 12 cities they stop in (including the U.S., Ireland, Wales, and England), the riders will meet up with peers in similar professions to trade notes and discuss best practices. Here’s more from their website:


“The riders will be making comparative analyses of the 12 major cities they ride through including how they are providing facilities and infrastructure for cycling. We will then be riding through the cities to experience cycling facilities directly and talking to local architects, cyclists and policy makers. On our return we will compare our findings with other expert groups, before publishing the research in print and digital formats.”

In addition to Portland, the cities they plan to stop at include: Minneapolis, Milwaukee, Chicago, Michigan City, Columbus, Pittsburgh, Philadelphia, New York, Dublin, Oxford and London. They’ve already completed a training ride to Copenhagen, which “will provide base line experience against which the team can review the cities encountered en route.”

Their research will synthesize what they learn into “a handbook for decision makers” and they’ll formally present it at the World Cycling Summit in London in August 2013.

For a closer look at the ideas and the people behind the ride, check out their video below:

Check out PortlandtoPortland.org or follow them on Twitter at @P2Pcycle and stay tuned for more coverage once they arrive later this month.

Okay, I admit I watched the video primarily to hear how they pronounced Oregon. (The one mention was right–go Brits!) I can’t help wondering if they really, *really* understand how big this country is. They will by the time they hit NYC, that’s for sure.

They could have just cycled from one end of the Netherlands to the other – it would have been quicker and easier, and they would have learnt a whole lot more about how to create good cycling infrastructure.

“A stonking charity initiative”?! It reminds me of when I did an internship in London, I joked that at times I needed an English to English dictionary. Have a great time, enjoy our city (and this country) and we look forward to what you learn and share.

the name of this ride is strangely similar to a stunt pulled off by two Portland natives last winter: Portland to Phoenix!!!! – pdx2phx2012.blogspot.com. P’s going places…

… and welcome to Portland, glad to have y’all