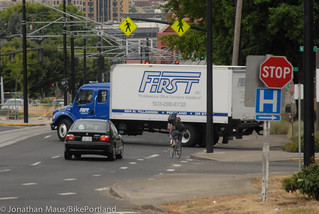 A PBOT project to improve safety for bicycling
on Broadway between N. Wheeler and Ross
is in the running for state funding.
(Photo © J. Maus/BikePortland)

The Oregon Department of Transportation has released an updated list of projects to be funded and constructed through their 2015-18 Statewide Transportation Improvement Program (STIP). For ODOT Region 1 (which includes Clackamas, Hood River, Multnomah and parts of Washington County) the program splits $127 million between a “Fix-It” pot and an “Enhance” pot to the tune of $60.5 million and $66.4 million respectively. “Fix-It” projects “maintain or preserve the existing system” (primarily new signals, bridge repairs, and paving), while the “Enhance” projects “expand or improve the transportation system.”

For context, this is the first time ODOT has ever doled out these funds in this manner. Prior to last summer (when ODOT announced the changes), the STIP program had 22 different individual programs. All these dedicated funding pots have been simplified down to just these two.

When this new allocation method was announced, active transportation advocates were concerned for three major reasons: It abolished dedicated set-asides for biking/walking projects; it put a lot of power into Area Commissions on Transportation (ACTs) to decide which projects would get funded (and there were concerns that the ACTs did not fairly represent all users and regions); and there was no clear and subjective criteria for judging projects.

In July 2012, the BTA’s Advocacy Director Gerik Kransky wrote, “We are worried that biking and walking projects will lose out in this process.”

At this point, it looks like demand for biking and walking projects from communities and agencies throughout Region 1 has been strong. If the final project list contains a similar proportion of this 150% list, biking and walking-centric projects will have fared well.

The list containts 27 projects in the “Streetscape/Bike/Ped Connectivity” and “Regional/State Trails” categories worth $46.9 million (or 47% of the total). That’s compared to $51.3 million (or 51.4% of the total) combined for the “Non-Hwy Freight Connections,” “ITS [Intelligent Transportation Systems],” and “Highway Mobility” project categories.

Given those numbers, Kransky, reached today for comment said, “Overall, we are happier now than when this thing started.”

Here’s our chart of the breakdown: 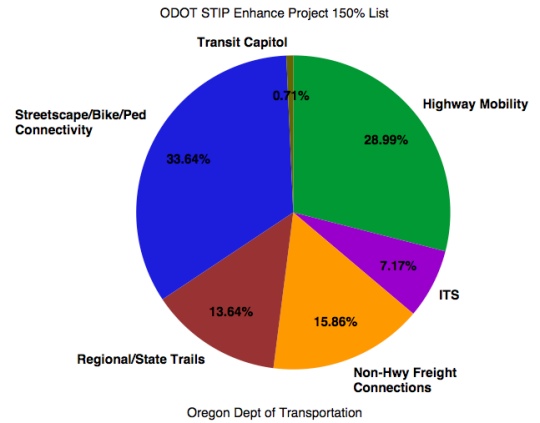 Among the notable Portland projects in the Regional/State Trails category that have made this first cut are a portion of the Sullivan’s Gulch Trail (the undercrossing of I-205) and Segment 1 of the North Portland Willamette Greenway Trail (Chimney Park to Kelley Point Park).

The City of Portland Bureau of Transportation applied for several bike-related projects. The notable ones that made the 150% list are:

Connected Cully ($2,877,641)
This project seeks to create safe and seamless pedestrian and bicycle transportation connections in a neighborhood severely lacking them. This project will serve 13,000 residents in Cully, the state’s most diverse neighborhood, transforming it into a more connected community. The project will calm traffic, fill in the missing sidewalks along transit routes, and increase walking and bicycling by creating new north/south connections to Cully’s crowded public schools. This project will leverage regional public investments by providing connections to the recently completed Cully Boulevard, to transit, and to the future site of Thomas Cully Park. It will also provide critical connections for the 2,000 residents of the Hacienda Community Development Corporation housing complexes.

Downtown I-405 Pedestrian Safety and Operational Improvements ($2,009,952)
The primary goal of this project is to enhance pedestrian/bicyclist safety and traffic operations at two intersections where Interstate 405 (I-405) on- and off-ramps cross an important city street with high levels of pedestrian use. The project will facilitate safer and more frequent pedestrian and bicycle crossings on NW Couch St., while creating more efficient I-405 access ramps. The funds will improve pedestrian safety and connectivity by constructing new curb ramps and corners, marked crosswalks, and upgraded traffic signals. In addition, the project will improve freeway ramp efficiency by separating freeway and local traffic, and improve connectivity between adjacent neighborhoods across the freeway.

N Broadway Safety Crossing Enhancement Project ($1,389,458)
The primary goal of this project is to enhance traffic safety and operations along N Broadway St between N Ross Ave and N Wheeler Ave. The project eliminates several complicated weaving maneuvers while facilitating safer and more frequent pedestrian and bicycle crossings of Broadway. This change will reduce crash activity and enhance access to local businesses, a new streetcar stop, redeveloped buildings, and Rose Quarter events. The funds will close a slip lane, reconstruct and extend sidewalks and provide a signalized pedestrian crossing. In addition, the project will complement ODOT’s plans to consolidate the I-5 freeway Broadway off-ramp. These improvements are consistent with the recently adopted City of Portland’s N/NE Quadrant Plan and ODOT’s I-5 Broadway/Weidler Facility Plan.

SE Foster Road Safety and Sidewalk Enhancement Project ($2,243,997)
The SE Foster Road Safety and Sidewalk Enhancement Project will design and construct elements of the Foster Road Transportation and Streetscape Plan (adopted in 2003 and updated in 2013) along SE Foster Road between SE 50th Ave and SE 90th Ave. It will primarily focus on pedestrian and bicycle crossing safety and access to transit, followed by streetscape improvements in the priority Districts identified in the Plan. Improvements will include pedestrian safety crossing improvements along the corridor; bus Stop Improvements at multiple locations along the corridor, to be determined in coordination with TriMet; signal synchronization equipment upgrades; and bike parking, facilities and crossing improvements along SE Foster.

The PBOT projects that didn’t make the cut include building a portion of the Red Electric Trail in southwest, making improvements to SW Barbur Blvd (between SW 19th and 26th), and the North Williams Traffic Safety Operations Project (which is fortunately still in the running for a different grant).

ODOT now wants public comments on these projects. View the STIP website for maps and more info and email your comments to STIPEnhanceAppsRegion1@odot.state.or.us.

Ha, I see they managed to slip a streetcar stop in there.

Chris I
Reply to  Ian

The project will improve access to the stop. The stop is already there.

Also, a portion of the Sullivan’s Gulch Trail is listed, along with an overcrossing at Johnson Creek for the I-205 path.

The project proposal is for a bridge over *the* Johnson Creek (near SE Flavel). Currently, bicyclists need to detour west to 92nd to cross. It’s kind of a pain.

Glad to see they slipped Foster Road in there!

For a detailed list of all the projects in Region 1 that the Bicycle Transportation Alliance is advocating for, click here:

Anyone who is planning to send their own public comments should feel free to support these bike-friendly regional priorities.

highway mobility is an oxymoron.

Just a quick plug (if anyone is still reading this thread) that the Foster Streetscape project meets again tonight from 6-8PM at SE Works on Foster.