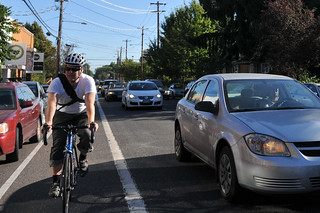 The City of Portland Bureau of Transportation has applied for over $36 million in state transportation grants. The grants are administered by the Oregon Department of Transportation (ODOT) through their 2015-2018 State Transportation Improvement Program (STIP). PBOT’s list (PDF) includes 16 projects, many of which are crucial for improving bicycle access throughout the Portland metro region.

See highlights from the list below, followed by my comments and more analysis of the STIP process:

Other notable projects on the list are $2.5 million for the Foster Road Safety Project and $1.3 million for “roadway reorganization” of SE Division between 50th and 80th. Both of these projects should/could include major bikeways on these key arterials.

These grant applications are the first in ODOT’s “Enhance” fund, which is a new method of awarding STIP funding. Enhance is one of two pots of STIP funds (the other is “Fix-it”) and has $227 million up for grabs. Local governments and other agencies across the entire state will be competing for this money.

In our region, Region 1 (which includes Multnomah, Hood River, and Clackamas counties, and most of Washington county), we’ll get a sub-allocation of $64.8 million. Out of that, $22 million is expected to flow into Portland. Fighting for that $22 million is not just PBOT projects, but also projects from TriMet, the Portland of Portland, and other agencies. A source at PBOT estimates they’ll ultimately be awarded about $10-15 million total from the STIP.

Making things even more interesting are the serious concerns from inside PBOT and from advocates like the Bicycle Transportation Alliance about how the STIP projects will be awarded. Unlike years past, ODOT has created an entirely new process for picking which projects will get funded. Metro’s JPACT committee used to vet regional projects, but now a new committee with four representatives from each county in Region 1 will make the decisions. This means sparsely populated counties with much different perspectives and priorities than Multnomah will have equal decision-making power at the table.

On the 17 member selection committee (see the list below), the City of Portland will have only one representative, the mayor. If PBOT wants a champion for their projects, the mayor’s voice must be strong around the table.

In addition to the concerns about the STIP selection committee, there are grave concerns that ODOT has eliminated the objective evaluation methods previously used to score and rank projects. This gives the selection committee a tremendous amount of power. “The rules are kind of loose,” said one PBOT staffer at a recent meeting.

Also worth remembering is how the new STIP selection process mirrors the federal guidelines under the new MAP-21 bill. Like MAP-21, ODOT has eliminated dedicated funding streams for specific projects and programs — like safe routes to schools or trail projects — in the STIP. While a lack of dedicated funding makes some people nervous, it also means those project types can compete for much larger sums than ever before. However, they are now competing against highway “modernization” and public transit projects. The big question is, given the selection process, will a bike-centric project be able to compete with more traditional highway projects without objective evaluation criteria and with committee members from parts of the state where biking isn’t on the radar?

Keep in mind, these applications are for projects that would be funded and constructed beginning in 2015. That means we won’t even get a final decision on awards until November 2014.

Hoping for an update soon on the 50’s Bikeway Project. This will be my kids’ route to and from Grant High School, from their mom’s house near SE 54th & Powell, which today they simply do not bike because of the risks in traffic.

“As of July, the project reached 60% design. Final plans are anticipated in late fall. Construction will begin in early 2013 with completion dependent on weather for striping.”

Late fall is almost over, and early 2013 is just weeks away.

Thanks, Spiffy. My kids live primarily with me, in Irvington. Split households, larger footprint.

“…but now a new committee with four representatives from each county in Region 1 will make the decisions.”

Jonathan, any idea who these people are?

Yep. I do have what I think is a preliminary list. I’ll look for a final list and/or update the story with the one I’ve got now.

Something about “highway modernization” strikes me as an oxymoron, particularly when I read about what such projects entail.

“$1.5 million for a traffic signal at Broadway and Wheeler”

Most of us are aware of the continuing safety issues at this interesection, but for the uninformed, this is an Oregonian headline just waiting to happen.

I’m glad that more projects from SW Portland are on the list. I seems that so far the bike friendliness is mainly happening on the East side while SW Portland doesn’t even have sidewalks.