“Our design standards still point to bike lanes for this particular project… After reviewing the data, a physically separated bicycle facility did not appear to be warranted.”
— Jilayne Jordan, ODOT Community Affairs

Our story last week about an Oregon Department of Transportation (ODOT) “safety project” on NE Sandy Blvd has gotten the agency’s attention. After being emailed by several readers who questioned the agency’s chosen design for handling bike access in the project, ODOT community affairs staff sent out a detailed, bulk email on Friday afternoon. The email explains why ODOT chose standard bike lanes on the busy freight route instead of something with more separation — like a cycle track or a buffered bike lane — as recommended by their own design guidelines.

As per the project, ODOT is widening a 1.1 mile stretch of Sandy to include a center turn lane as well as two, six-foot wide bike lanes. ODOT Region 1 Community Affairs Coordinator Jilayne Jordan says the new turn lane is intended to reduce rear-end and other collisions and serve as, “a refuge for vehicles turning left onto or off of the highway.”

The addition of bike lanes are a step forward from the gravel-strewn shoulders that exist there today. However, merely widening that shoulder and painting a stripe on it doesn’t seem like much in a $3.6 million project aimed at improving safety.

In their response, ODOT listed several reasons why they are moving forward with the bike lanes and not a more appealing bikeway.

“Halting construction, starting a new design, obtaining new permits and buying necessary right of way would increase the project cost, exceeding the total budget… ODOT is increasingly concerned about ensuring its projects are completed on time and on budget, particularly during these difficult economic times when transportation dollars are few and precious.”

And the lack of roadway space…

“The widths of the travel lanes and the sidewalk being built as part of this project are already at the recommended minimum and cannot be reduced without creating safety and mobility problems for highway users.”

But what about how their own design manual calls for a more robust bikeway design? ODOT says that even if they used the new, 2012 Highway Design Manual (which includes the 2011 Bicycle and Pedestrian Design Guide as an appendix), their decision to provide two six-foot bike lanes “would likely remain unchanged.”

When making design decisions, we must also take into consideration a variety of other factors, including the context of the roadway, location of adjacent or connecting bicycle facilities (such as the existing bike lanes on Sandy Boulevard between NE 102nd Avenue and NE 122nd Avenue), availability of right-of-way, a roadway’s functional classification, whether or not it’s a freight route, expressway or scenic byway, if it’s a heavily used bicycle route, if there’s a history of bike-involved collisions, etc. Based on all these considerations, our design standards still point to bike lanes for this particular project.”

Jordan said the project team did consider more significant bike access, but that, “After reviewing the data, a physically separated bicycle facility did not appear to be warranted.” 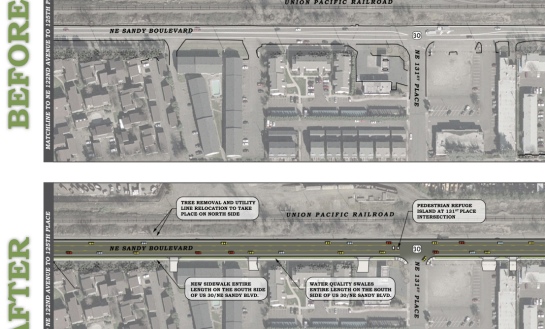 Before and after image by ODOT. Download full PDF here.

Another thing ODOT pointed out in their reply (and during a phone call I had with them about this last week), is that no one raised these concerns during the public comment period. The time to have effective input into a project like this is two years before it goes into construction. Jordan then shared details about ODOT’s Statewide Transportation Improvement Plan (STIP), which is updated every few years and which has many ways for the public to track the projects in it.

I hear this range of excuses a lot from transportation agencies: That there aren’t enough people bicycling on X roadway to warrant a robust bike facility; that there’s not enough right-of-way to go around; that it would cost too much; and the big one — that if people want different outcomes, they should become more engaged in the public process.

I understand the importance of activists getting involved at the right time during a project’s evolution in order to lobby for changes. Effective input at the right time can push back against all those excuses above. But the truth is, most people — especially the ones we should be building our streets for — are not activists. They just want safe transportation options and the same quality of access to our streets whether they’re in a car or on a bike.

Relying on citizen activists to influence project outcomes will never lead to the change in the transportation status quo we are all pushing for. There must be a balance. Agencies (this story could easily be about PBOT, Multnomah County, and so on) need to do more activism themselves. That means not hiding behind outdated guidelines and claims that “there isn’t enough funding” when hundreds of millions are being spent on highway-widening projects and we continue to build streets primarily for cars when our future depends on better access for bicycles.

I emailed Jilayne after reading the initial story, and got a similar reply. The part that made me angriest was the use of “connecting bicycle facilities (such as the existing bike lanes on Sandy Boulevard between NE 102nd Avenue and NE 122nd Avenue)” as a justification. Why do existing inadequate facilities justify more of the same?? Grrr.

Basically- we have a crappy facility on both ends of the projects, we don’t really expect anyone but the hard-core racer to use the project and so we won’t do anything special. If you live in a neighborhood that already has activist cyclists you can get something nice but when there aren’t enough squeaky wheels then you get the basic, crappy treatment.

I think the most damning thing that was in this piece
ODOT says that even if they used the new, 2012 Highway Design Manual (which includes the 2011 Bicycle and Pedestrian Design Guide as an appendix), their decision to provide two six-foot bike lanes “would likely remain unchanged.”

Basically if someone didn’t speak up loudly early and often, there is a 0% chance that this project would have had a better outcome for cyclists. Isn’t this what the Bike & Ped design guide was supposed to do? Reduce the amount of involvement activists needed to have on each project?

This is my concern too. ODOT pretty much said regardless of the new guidance, the project would not have changed its design even if the guidance was applicable during the original design.

I wish ODOT only said that “no one raised these concerns during the public comment period.” But adding that other bit really makes me more concerned about the design process.

Excellent reporting, Jonathan.
As some of us have said before, separate but hardly equal.

“a new scientific truth does not triumph by convincing its opponents and making them see the light, but rather because its opponents eventually die, and a new generation grows up that is familiar with it.”[1]

Seems like half of ODOT’s manpower is spent thinking up excuses of why they need to maintain the status quo. They’re an embarrassment.

I’ve been working in and near that neighborhood for a few days a month for the last 12 years. I never used to see any cyclists; but for the last four or five years now I see more cyclists there all the time.

I must admire the circular logic of: there aren’t enough people bicycling on it to justify building it in such a way that more people would cycle on it.

To the point of “That there aren’t enough people bicycling on X roadway to warrant a robust bike facility” allow me to say the same thing I say to fellow web developers that make excuses about not making their website code work for everyone (their excuse is that browser-x doesn’t represent enough stats to support). Statistics of who uses a facility are only as good as the people you already support with those facilities and have very little to do with the ones you don’t support.

In the case of web sites, people with the unsupported browsers will visit once and never again – the stats do not represent the people that would like to use you site. The same has to be said about Sandy. There are unknown amounts of people that would likely use Sandy if it felt better to use, but because it isn’t, they won’t come.

Forget the bike lanes, they’re so full of broken glass and pieces of sharp plastic and metal that you’d be a fool to ride them. I spent two years riding to work on this route and I averaged two flats per month.

Chris I
Reply to  Hart Noecker

I’ve been using the Schwalbe Durano tires and have had good results. I’m down to maybe 5-6 flats a year, with most of them happening in the dark when I can’t see all of the debris. One advantage of this project, at least on the south side, is that they will have a curb now, so the city has to sweep the street. Before they considered it a “self-cleaning” street, because it had no curbs.

For as long as I can remember, ODOT have parroted “safety” as their “number one concern”. It’s funny, because you never see one iota of it in any of their traffic designs. Moving capacity is their number one concern, not safety.

The only time there is any “safety” to any of their projects as far as I can see, it is –

1) when they hand the entire corridors over to PBOT for ownership, and PBOT goes ahead and carries out safety improvements (ie Sandy Blvd)

2) when they partner with PBOT for the city’s high crash corridor safety projects.

So basically, unless PBOT are involved, ODOD don’t seem to give a c**p.

Chris I
Reply to  Adam

To be fair, this project will increase the safety for the vast majority of road users here. As someone that rides this stretch every day, I can admit that I do not feel safe, but what I see looks even less safe. I see residents of the apartments dashing across the high-speed traffic to reach the bus stops, I see mothers pushing their babies in strollers along the gravel south side, with cars flying by just a few feet away. I have seen cars lock up their brakes or swerve onto the shoulder when cars stop in the travel lane to turn left. While the bike facilities for this project could be much better, this will improve safety. It probably won’t attract very many new cyclists to the road, though, which is very unfortunate.

In case you haven’t seen it yet, Sandy the Movie.