“ODOT used the Oregon Bicycle and Pedestrian Plan (1995) when designing this project, which does not… mention buffered bike lanes or cycle track and design criteria.”
— ODOT

It’s a shame that outdated engineering guidelines continue to prevent us from designing streets in a way that matches our goals — but that’s exactly what’s happening out on a segment of Sandy Blvd in east Portland.

Last month, we shared the news that the Oregon Department of Transportation (ODOT) is spending $3.6 million to rebuild a one-mile segment of Sandy between NE 122nd and 141st Avenues. The US 30 Bypass (Sandy Blvd) Safety Project comes with standard, six-foot bike lanes. That might sound good, but this type of bike lane is nothing but a continuation of a status quo that is inadequate for bicycle riders and that doesn’t match up our our city and statewide transportation planning goals.

A standard bike lane next to heavy auto and truck traffic going 35-40 mph is the same way we’ve designed roads since the 1990s. Today, planners and the public are insistent on more significant bikeway access that includes some level of separation.

After publishing that story, I heard from local bicycle transportation planner and activist Nick Falbo. After he learned about the project, Falbo contacted ODOT to point out that their own Bicycle and Pedestrian Design Guide (published in 2011) shows that the appropriate bicycle facility for a roadway with the characteristics of Sandy is either a cycle track, a buffered bike lane, or a shared use path (all of which offer much higher quality bicycle access than a conventional bike lane).

To back up his claim, Falbo attached the “Recommended Separation Matrix” chart from ODOT’s guide book. As you can see below, with its 40 mph speed and about 20,000 average daily traffic volume (ADT), this segment of Sandy falls well within a recommended range for separated bicycle infrastructure: 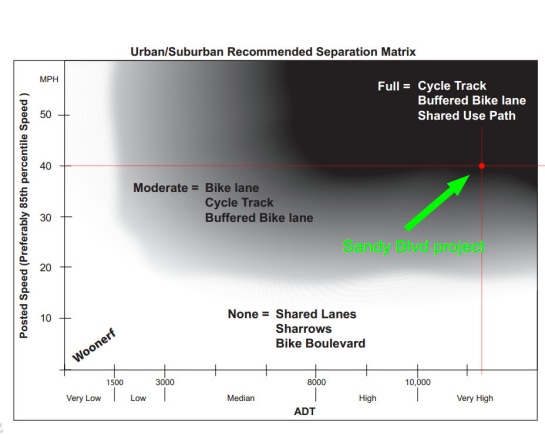 “Can you provide more information as to why bicycle lanes were preferred for the final design over a more separated facility as indicated by ODOT’s own design guides?” asked Falbo.

Falbo heard back from ODOT one day later. Unfortunately they said the design of the project was finalized in late 2010, before the 2011 ODOT Bicycle and Pedestrian Design Guide was published and its “separation matrix” were in use. To design the Sandy project, ODOT planners used the Oregon Bicycle and Pedestrian Plan that was last updated in 1995 — a full 15 years before the project was designed.

Must we really rely on outdated guide books to design our roads? If engineers and planners at ODOT know better, why can’t they make an exception during the late stages of a project’s design? This is unfortunate and frustrating and I hope we can avoid this type of mistake in the future.

That’s utterly inexcusable of ODOT. They need to redesign this stretch of NE Sandy before they make a HUGE mistake after which ALL users will suffer for decades! It’s not too late to fix this incredible oversight. A mere painted strip will do nothing but annoy car/truck drivers and make the road unacceptably dangerous for the few cyclists that will even dare to bike along this poorly designed stretch of road.

It certainly will do NOTHING to increase cycling in that area, either. It will be a total failure in every way. ODOT: change your design to actually protect cyclists and make the road more attractive and safe for ALL users!!

Please explain in detail what this chart is showing. What is ADT?

To be precise, it’s actually the Average Daily Traffic volume, not the “annual” daily traffic 🙂

I bike that section of 30 fairly often and most motorists treat it like its a 55 mph freeway. And while bike lanes will be appreciated, 30 badly needs better sidewalks and more frequent signalled intersections. It saddens me that his entire area has virtually no pedestrian or cycling infrastructure. The parkrose-argay area is a text book case of PDX transportation infrastructure redlining.

Heck, it’s not even pleasant to drive it when accessing local neighborhoods.

Much of the problem is that ODOT has no ped/bike advocacy within its staff, just a tired group of road designers. And their ped/bike coordinator position is relegated to a yes man type role. Road-building 1970s style.

ODOT is famous for saddling Portland with poor infrastructure that we don’t want but have to live with for decades, as anyone who’s ridden across the St Johns Bridge can attest. NEW CONTEST for alternate meaning for ODOT . . . begin.

I went on the ODOT website and provided feedback that they should check out the Cully Blvd. cycle track article from over a year ago.

The ODOT contact for this project is Jilayne.Jordan@odot.state.or.us . I sent her/him my feedback.

Thanks so much for that contact info, Alex!! I just sent a LONG note to Jilayne Jordan. I suggest that everyone else does, as well. ODOT needs to hear from us loud and clearly that this design does NOTHING to encourage cycling. In fact, it only makes cycling more dangerous! Painted a stripe in the road and putting cyclists one INCH from cars going 50 mph is supposed to represent progress in our transportation infrastructure?!?

Look at Hornby St in downtown Vancouver (BC). I rode the awful Hornby bike lane three years ago, and I nearly got hit hundreds of times in less than a mile. And that was with very slow-moving downtown traffic. Compare that to the wonderful cycle track on Hornby (and Dunsmuir) now–there is absolutely no comparison! Cycling in downtown Vancouver (outside of the wonderful, world-class Seawall Path) is actually a viable, safe transportation option that appeals to anyone from 8 to 80, including the crucial “interested but concerned” crowd!

OK, fine. You want to play that way? We’ll spot you this one, ODOT, but we’re going to be on your butts constantly on every project from here on out.

I experienced “cycle tracks” over 40 years ago in and on the campus of the University of Illinois. There were several two-way streets with a two-way cycle track at sidewalk level, but separate from the sidewalk. They were not without problems. That configuration introduces a second two-way movement of traffic in a location where it is unexpected for motorists on the primary street adjacnet to the cycle track, motorists turning into or from adjacnet parking lots, driveways, or minor streets. I personally witnessed on crash due to this configuration. (I was the cyclist and saw the motorist who stopped for me get rearended.)

However the most signficant problem is that placing the cycle track on one side of the street requires the cyclists heading in one direction or the other to transition across the road at the beginning and at the end of the cycle track.

Let’s assume a Sandy cycle track were implemented on the north side of Sandy from 121st to 142nd. The westbound cyclist could easily transition from the street or shoulder to the cycle track at 142nd and back onto the shoulder at 121st. But consider the eastbound cyclist. He/she would have to cross from the shoulder on the south side of Sandy in the vicinity of 121st to get to the cycle track. Then after riding a short distance, he/she would transition back across Sandy to resume an easterly trip on the south shoulder.

Do you want to do that at an unsignalized location? Do you want a signal? Would you wait for a signal? (I ask the last queston because I’ve seen several people unwillng to wait for the new bicycle signal at Johnson Creek/Bell Avenue/Springwater Trail.)

I know that lots of you are tremendous fans of cyclet tracks, but I’m not convinced they are applicable in all locations. I, for one, think ODOT’s proposal at this location is reasonable.

I haven’t had much experience yet with the Cully cycle track, having seen it only on Sunday Parkways. However, I think there’s a big difference between a residential street (Cully) and a truck and commuter route (Sandy).

Chris I
Reply to  J_R

A buffered bike lane would be reasonable. 6ft bike lanes, which in reality, will feel like much less, because to the immediate right of the road bed is a ditch, not a sidewalk. And the City of Portland claims the road is “self cleaning” because it doesn’t have sidewalks, so the 6ft bike lane is constantly full of gravel and debris. I often have to hug the fog line as cars and trucks speed by at 60mph. This is unacceptable, and this is not how we are going to increase bike commuting in our region.

To add to the fun the contractor has set up signs, cones, gravel piles all in what was left of the bike usable lane. There was no alternate lane or route provided. Is an alternate lane or markings required during construction, by law? I know I have avoided Sandy in this area for the last week, except weekends. I just roll through the construction as safely as possible. Taking the lane during this would be almost suicidal and I say this having watched a rider go towards Gresham in the mornings taking the lane as best she can.
The design may be horrid but still WAY better than what was here before and currently available.

Chris I
Reply to  Patrick D

Airport Way or the I-84 path are the only real alternates to get you through the whole mess. NE Shaver gets you 90% through; so that’s what I’ve been taking.

Aaron
Reply to  Chris I

Oy, Airport Way. I work @ Airport Way and 138th, and let me assure you that even though there are bike lanes it’s a fairly godawful street to bike on. I can live with the high speed (it’s a 45 but I doubt average speed is anything over 40) and traffic volume, but the density of bike-unfriendly intersections and insanely high truck traffic get to me sometimes.

I remember reading about this project when they finalized it back in 2010. It is inexcusable that they would let it sit on a shelf for two years without updating anything. What a joke. Thank you ODOT, my commute is going to be less safe because of you.

thank god they gave it a bike lane, unlike lower sandy, where it would be extremely useful.

“Unfortunately they said the design of the project was finalized in late 2010, before the 2011 ODOT Bicycle and Pedestrian Design Guide was published…”

This sounds nice and all, but the follow up question would be “what projects do you currently have in the works that are going to be built to the recommendations of the 2011 Bike/Ped Plan?”