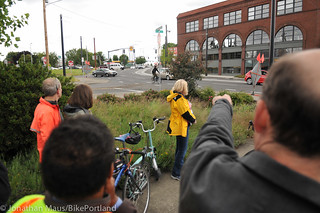 A meeting back in June helped highlight
safety concerns at the intersection.
(Photo © J. Maus/BikePortland)

It looks likes years of citizen activism might finally bear fruit. Yesterday, Betsy Reese — the co-owner of the Paramount Apartments situated on the peninsula formed by the intersection of N. Broadway, Flint, and Wheeler streets near I-5 — announced that PBOT is set to host a special public meeting next week to come up with safety fixes for the notoriously dangerous location.

I first reported about serious safety concerns at this intersection back in December 2007, when the Portland Water Bureau (who has their headquarters just northwest of the location) decided to prohibit their employees from making the right turn from Broadway onto Wheeler. Water Bureau safety officials made the decision out of concerns about right-hooks following two fatal collisions just months prior.

In the years since, there have been numerous injury collisions and likely thousands of near-misses. Last month, I reported yet another injury collision involving a man who was right-hooked when someone operating a truck turned right onto Flint. That collision came just weeks after Reese held a meeting at the location with bike advocates and staff from ODOT, PBOT, and the Water Bureau.

PBOT and ODOT are currently partnering on a $400 million project that will add a lane to I-5 through the Rose Quarter. Improvements to Broadway/Wheeler/Flint (and other surface street improvements) made their way into the plans of that project, but the implementation timeline for them is uncertain and likely years away (skeptics worry that ODOT will construct the new freeway lane in the first phase and then have no funding or obligation to do the rest). ODOT, upon hearing the safety issues and appreciating the political optics of the situation, agreed recently to speed up their timeline for removal of an I-5 slip lane that feeds onto Broadway just north of Flint and contributes significantly to the safety issues. 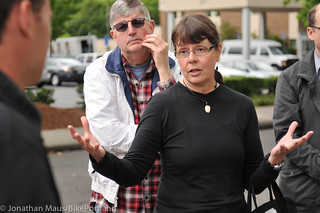 Now it appears that PBOT is also not satisfied with waiting for these surface street improvements and is not willing to let them take a back seat to the freeway widening element of the larger plan. Yesterday, Reese sent an email to an ad-hoc group of activists and other stakeholders that PBOT wants to meet next week to discuss the situation and move forward with solutions.

Here’s an official statement from PBOT shared by Reese yesterday:

“Thanks to everyone for your interest in helping with a pressing safety concern at the intersection of N Broadway, Wheeler, and Flint. Staff from the Portland Bureau of Transportation and Oregon Department of Transportation have been working to analyze the situation and to identify immediate, mid-term, and long-term safety solutions for this complicated intersection. This meeting will be to share information related to ongoing analysis of the safety concerns, potential alternatives for addressing these concerns, and identification of timeline to address the safety problems present at this location.”

Next week’s meeting won’t be a brainstorming sessions for new ideas, it will be an opportunity to hear from PBOT what near-term safety fixes they feel they can jump on and implement right away.

As proof of their commitment to this element of the plan, a PBOT source pointed out that a new action item has been officially added to the Draft N/NE Quadrant Plan document. Action TR19 on page 38 states:

“Study and implement near term bicycle and pedestrian safety enhancements in the “box,” especially along N Broadway, that address major safety needs and advance the long range plan.”

The timeline for these near-term fixes is stated to be 2014 or sooner.

We’re definitely not across the goal line yet; but for Reese, there is reason for optimism that her dedicated activism might finally pay off.

“We appear to be closer than ever before to making this notoriously dangerous intersection safe and orderly for all modes of travel,” she wrote via email yesterday, “Before long, hopefully, we can all look back, and without exaggerating say, ‘We probably have saved a life, even though we’ll never know whose family and friends we spared that grief. I was one of the people who had a hand in that.’ Thank you, everyone.”

“near-term fix”-as in about a year or so after a few more cyclists get run over? how long does it take to drop a couple pitman barriers & put up some *no right turn” signs on broadway heading west?

Signs will be ineffective without enforcement; this goes for speed limt signs on Broadway.
Any change here will need to change the natural flow of traffic while simultaneously making a slower traffic speed the natural response of all drivers, not the enforced response.

i think a pitman barrier would be quite effective in preventing vehicles from turning right onto flint or wheeler off broadway.

Are you referring to one of these? Pittman makes a bunch of different products. http://www.pittman.ie/swing-barriers–access-barriers-!43-cat.html

just looked at some online pics & was actually thinking of the cast concrete, moveable *jersey* barriers. thanks joe.

Yeah, that would do the trick. 😉

yeah, those big concrete half-walls can’t be that expensive…

hell, we can build a few sawhorse style barricades and put up signs in true citizen guerrilla action style for free…

Beth Slovic? Where are you?

Well, you really wonder, since I read that they blew the transportation budget painting a couple bike boxes on Interstate.

About f’n time. The sad thing is that I take Flint to access the Broadway Bridge in order to avoid the even more dangerous intersection at Broadway and Wheeler, and I suspect a lot of other folks do too.

Now, I’m no fancy city civil engineer, but it seems to me that all you need to do is slow down the traffic there. Some rumble strips west of Williams, then a speed bump or two would get people moving at the same speed whether it’s in a car or on a bike.

Well then you’ve reduced the LOS and that just can’t happen.

Slow traffic down?! Tut tut, that is anti progress. What will the fast bike commuter do now? Take the bus? 🙂

“bunny hop” the front of the speed bump and pump the other side for even more speed!

Thanks to Betsy for putting so much work into this to date. It is heartwarming to see a business owner going out of their way to assist bicyclists’ lives for the better.

As far as the location – this intersection is an absolute mess. It is a person’s death just waiting to happen.

I would like to see a diverter installed here, as was installed on Interstate after a cyclist was tragically killed there. There is no need for through-traffic on Wheeler. It can easily access the street from Interstate & Tillamook if it needs to.

Spoiler alert: PBOT investigates and finds it can’t do anything until the $400m highway project happens.