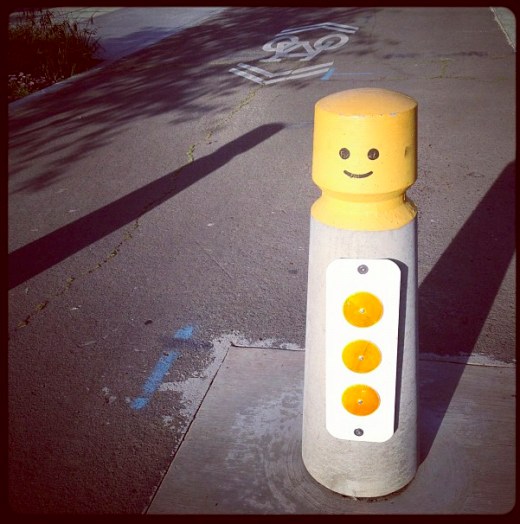 Well hello! Nice to see you too!
(Photo © J. Maus/BikePortland)

One of my favorite pieces of PBOT magic is the Holman Pocket Park. And now it’s even sweeter because of these little guys who greet me whenever I ride through.

NE Holman is one of PBOT’s neighborhood greenway streets. Between NE Durham and 13th, there used to be a small and neglected park on one side of the street. As part of the greenway project, PBOT decided to expand the park all the way across Holman and create a “pocket park.” Through auto traffic is now prohibited and to make sure people don’t drive through the two-way path that goes through the park, PBOT placed cement bollards at both entries.

I usually abhor bollards. They create obstacles on bikeways and they’re yet another sacrifice and compromise in the riding environment because of automobiles. Suffice it to say, these are the first bollards I’ve ever seen that actually made me smile. The little Lego face and the reflectors sort of remind me of a tie or the buttons of a shirt. So cute! (Maybe someone will add a hat and maybe a sweater for winter?)

I have no idea who’s responsible for this. But thanks! I think they should become a standard bollard treatment.

Nice! I have to say, though, bollard often make me smile, when they mark a transition from hyper-aware cycling alongside cars to the relaxed cycling of car-free zones.

Rolled through here the other day for the first time. Amazing how adding two dots and curved line to these bollards totally transformed the experience for the better. Just have to cover them up in this image with your finger to see the difference.

This little park is a PBOT win.

Holman St park bollards get the happy Lego treatment… And the BikePortland.org images get the cheezy Instagram treatment… 🙂

Of interest to BikePortland readers:
Also in NE 13th and Holman park is a new kiosk with a green roof that neighbors built. Neighbors secured several bicycle tools to the kiosk, free for anyone to use. Kai from UpCycles Bike shop donated the tools for free. I’d love to see other neighborhoods mimic this mini repair station with tool set-ups of their own on the Greenways. Come by and check ours out!

I ride through here pretty much daily, and it’s been great seeing this little area transformed and used so much more than it was before. I heard when the smiley Lego faces were first painted on, there were also clothes added to the bollards that quickly vanished. It is still a simple and delightful bit of public art.

Yeah, I saw the bollards with kids clothes on – and it looked SO FUN! The faces with the little clothes was delightful…and it definitely caught my attention. I find it funny that the clothes were removed to make the bollards ‘safer’ to display the reflectors once again (I’m assuming this is why they were removed), when in reality an object that looks like a young child is probably the best test to see if a driver is paying attention. If they drive into that, they have a serious problem.

I hope the kids get their clothes back! It made it a million times more fun – but even as it is currently, it brings a smile to my face each time I pass their friendly smiles to/from work each day.

according to a neighbor, one side is lego and the other side is playmobile. Not that I can tell the difference!