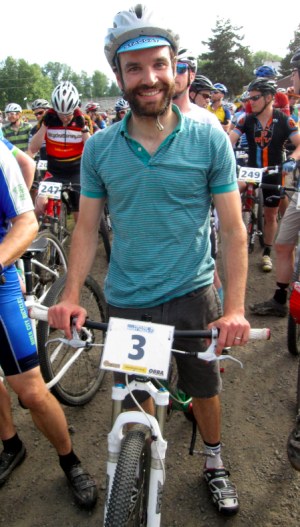 Mat Barton before the start of a race last year.
(Photo: Kris Schamp)

Offers of help, positive thoughts and prayers are pouring in from the community tonight as we learn that 31-year-old Portland resident Mat Barton is paralyzed from the chest down following a crash during a mountain bike race at Portland International Raceway on Monday night.

Barton, a skilled and experienced racer, was competing in a singlespeed race at the Portland Short Track series when he hit a series of large bumps, got thrown off balance, and fell head first at high speed. Kenji Sugahara, executive director of the Oregon Bicycle Racing Association, says Barton suffered a serious spinal cord injury. He underwent surgery at Legacy Emanuel Hospital last night to remove broken vertebra. The surgery was successful, but doctors believe his paralysis will be permanent.

According to a journal being kept by a family member, Barton remains in the Intensive Care Unit and is already working on his physical therapy and recovery.

Sugahara told us that injuries of this sort are extremely rare. The last spinal cord injury that happened during an OBRA race, he said, dates back to the 1980s. “As with any athletic event there are certain risks that we take. What Mat experienced was an atypical event.”

Mat works as a graphic designer for BikeTiresDirect.com and Western Bikeworks (Mat designed the ad below this post) and his enthusiasm for bicycling and life has earned him many friends. 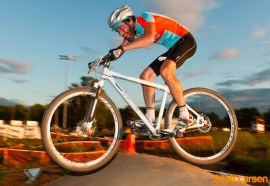 “To say that Mat is a local bicycle advocate would be an understatement,” wrote his friend Colin Winn in an email to BikePortland tonight, “Mat exudes all-things bike Portland.” Winn says Mat moved to Portland to pursue his passion for bike advocacy and riding.

Another person wrote in tonight to share that, “It seems unfathomable that this will be permanent, knowing Mat’s drive, energy, health and positivity.”

One person posting on the OBRA email list said he’s never met Mat, but he plans to sell a high-end frameset and donate the money to Mat’s recovery fund. There’s already talk of a fundraising ride, and Kris Schamp, organizer of the Short Track series says they’ll be raising money at next Monday’s race.

Sugahara emailed the OBRA email list earlier tonight to share more about Mat and to urge the community to support him and his family during this time:

“Mat is a passionate and talented young man, and loving husband, whose life and the life of his family has just been changed forever by a freak occurrence. Mat’s road to recovery will be long and difficult, and now it is our turn to help support him and his wife Jessica in their time of need.”

BartonPDX.com has been set up by Mat’s family, friends, and co-workers to serve as a fundraising portal with a goal to raise $50,000 to help offset costs of his treatment and recovery.

Stay tuned for other notices on how you can support Mat. And think good thoughts for his recovery.

“We are all incredibly sad and quite frankly in shock over what happened to Mat. I think I can speak for everyone in the company when I say that Mat is one of the nicest people we have ever had the pleasure of working with. The last few days have been very difficult for everyone here.”

Phillip says they are accepting donations at both of the company’s stores (Western Bikeworks, 1015 NW 17th Ave and BikeTiresDirect, 5741 NE 87th Ave.). The company has also set up a paid-time-off bank where employees can donate vacation time to help with expenses while he can’t work.

There are many events and fundraisers being planned. I’ll try to round them all up as dates and details are finalized.

UPDATE, 6/15 at 12:02 pm: Here’s the latest about an effort to coordinate fundraising events:

The management team at Western Bikeworks would like to make the store location available for a meeting with anyone that is interested in creating or assisting with the creation of an event to see if any of these efforts might be combined in order to maximize their potential. I’ll operate the whiteboard and we can make a list of everyone’s ideas.

Everybody has something unique to bring to the effort but perhaps there are synergies to be had that we can find at this meeting.

There are just too many unknowns here so hopefully the majority of the paralysis is temporary. It would be good to see someone recover as much as possible.

I have no way of getting in touch but Science Friday has had two stories of late that might be of help about severed and damaged nerves:
http://sciencefriday.com/segment/05/18/2012/rerouting-working-nerves-to-restore-hand-function.html

The first one listed was based on a case of a surgeon who became paralyzed and enlisted the help of all people a plastic surgeon. It turns out they have extensive experience with re-purposing certain nerves.

The second points to the fact that positive thinking and distinct goals really help the body make strides towards repairing itself.

I agree, Tom. Spinal cord injuries vary a lot (http://www.portlandpersonalinjuryaccidentlawyer.com/blog/bicycle-accidents/portland-personal-injury-spinal-cord-accidents/) but the second article you mentioned has a lot more to do with the developments in chemical and electrical stimulation of the spine to repair itself.

I wish Mat the best, and hope he gets the full medical treatment he needs to recover fully.

Our thoughts are with you Mat!

Here’s to sending him all best thought’s. I am so sorry to here about this.

You are in our thoughts Matt.

How horrible! Hang in there, Mat! And, may you ride again!

Prayers and thoughts going out to Mat and his family.

I’m a friend of Mat’s and would like to set up a fundraising event with a bike themed raffle. I’m meeting up with some people this Sunday to discuss details about that and brainstorm some other ideas. I’d really like to see our fundraising efforts focused on a couple well organized events rather than spread too thin. It’d be great to have everyone working together to make the events as successful as possible as well.

Please contact me at lowbelly@gmail.com if you’d like to meet up on Sunday or if you’re planning an event of your own. I’d at least like to get everyone in contact with one another and aware of what each other are doing so that we can cross promote our events. Thank you all for your kind words and donations!

Perhaps at the WNBR, Jonathan or the BTA could take up a collection? 10,000 people with a buck or two could go a long way.

The folks at Western Bikeworks (1015 NW 17th Ave) are having a meeting on Sunday at 5pm to discuss fundraising events. I’m rolling the meeting I was going to have into theirs.

Oh no! Prayers for Mat and his family…

Wow, thoughts to Mat and his family for his future recovery…

Everything that is being done sounds wonderful, but I am rather surprised that Western Bike Works will be docking vacation pay during such a time. I understand that it’s a business, but bike stores typically encourage their employees to race and be active in the cycling community. When accidents happen, shouldn’t they also have the full support of the company without having to worry about using paid time off? Just seems surprising is all.

Employees are not docked vacation time. They can donate up to 50% of their available PTO hours to Mat to help bridge the gap between now and when Mat can return to work. It is entirely voluntary.

FWIW Mat created the WBW ad that is currently running at the bottom of the article pages, including this one. He is not only a great guy but a talented designer as well.

…and the co-creator of Ted The Terrible Superhero.

We can’t wait to have you back in office making us laugh Mat.

cool. that is real cool. A strong and creative young man, with an awesome personality and tons of friends? I’m a bettin’ on him in the clutch.

Mat, We are sending you good thoughts. We wish you Good Healing.

Mat & Jessica, Prayers from Bakersfield, CA. I know Jessica’s background in OT & what I hear of Matt’s competitive nature will be helpful during this time of all the unknowns. Prayer is powerful & so is the desire to prove doctors’ diagnosis wrong. Stay strong!

I am throwing an alleycat to raise money for Mat on the 4th of July. Sponsors are still being accepted as well as donations.