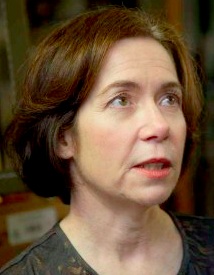 Nolan gets the nod over Fritz
for City Council.
(Photo: Mary Nolan campaign)

For City Council Position #4, Bike Walk Vote has endorsed Steve Novick. Novick ran for a Senate seat in 2010 (which he lost to Jeff Merkley) and he is considered a relative shoe-in for this Council spot. His main challenger is neighborhood activist Jeri Williams. In announcing their decision, Bike Walk Vote Co-Chair Peter Welte said Novick, “has been a champion of public health for decades,” and that he, “deeply understands the intersection of community health with healthy transportation and land use planning.”

There are three spots up for grabs on the Metro Council. In those races, Bike Walk Vote has endorsed Sam Chase for District 5, Tigard mayor Craig Dirksen for District 3, and the former head of land-use non-profit 1000 Friends of Oregon Bob Stacey for District 6.

All of the candidates endorsed by Bike Walk Vote will attend a party tonight at Crank bike shop (2725 SE Ash Street) beginning at 7:00 pm. Everyone is welcome to attend. There will be great conversations as well as free beer and snacks. See you there!

— Stay tuned for more coverage of these candidates as the May 15th primary approaches.

The candidates Bike Walk Vote is endorsing for Mayor, City Council, Metro Council, and Washington County Commission all want to meet you!

Join us & decide who deserves your vote and your help!

We’ll bring pizza and, of course, the beer.

We’ll also bring some ideas about how to build power for active transportation politics and hold elected officials more accountable!

Jonathan and Evan etc….Thanks for the good information.
The BWV PAC has more power as a PAC.

Even the BTA can send out questions and then share the answers:

You are forced to open each PDF and compare questions between each candidate. Someone with web skills and time could copy/paste the candidate answers sorted by question.

See all the candidates on April 11th. A lot of non profits have invited the city council wanna be’s to a forum!! Stay tuned.

Anyone have any tips on voting for pro-bike school board candidates?

These folks heavily impact schools support of non car methods. Students should have all year passes so they can get to summer jobs and summer camps. Where school boards direct funding has a huge impact on equity and transportation equity.

Help with school board candidates needed.

middle of the road guy
Reply to  Joe Rowe

What next, anti-abortion school board candidates?

If all the BWV candidates win then the City of Portland union employees won’t have to worry one bit about any pension or health reforms. The unions will get everything they want delivered on a silver platter. There probably won’t be any money left to build sidewalks in SW Portland but that won’t be a big deal.

Please explain? I feel like I’m out of the loop on that one.

The Tri-met board scapegoats unions too. Tri-met goes the extra mile to blame workers for agreements they’ve signed in the past.

Hey, how’s the OHSU tram working out for the general public? Getting some good tax revenue from the South Waterfront or Pearl lately? Feel good about half a million spent letting people know that the reason SE Grand has been torn up the last year is actually a streetcar (for those too slow to figure this out)?

I want Amanda Fritz again, She is soo funny.

I’m really disappointed that BWV endorsed Mary Nolan over Amanda Fritz. Fritz really impressed me and several other SE neighbors with her thoughtful support of the SE-NE 50s Bikeway. She listened to neighbors and came out to the neighborhood to see the traffic and road conditions first-hand before making a decision. Her support was key to having the bikeway approved by the Council. This was a tough vote as well and Amanda approached it with a great deal of integrity (and she knew that supporting the bikeway would cost her some support from neighbors who were adamantly opposed to having it on 52nd Avenue).

I am disappointed, too. I’m a 365-days-per-year bike commuter and I am voting for Amanda. She is the hardest working council member, financially responsible, very accessible, and fair. I see her at community events all the time. Name another, besides the mayor, that you often see at events outside of election time. If you live in Portland and want to be able to afford to buy a house here some day, or have a decent job/income, you’ll want someone in office who is not going to fritter away your future.

Mary Nolan is not someone I want representing me, or Portland. You should have seen her union “thugs” at Candidates Gone Wild last night. She doesn’t conduct herself much differently. Yes, I am a union member, I’ve been in the IBEW, a Teamster, and now the AFGE.

STORM LARGE supports Amanda and so should you!

Big plus: Amanda is against the CRC!

P.S. I don’t work for the campaign.