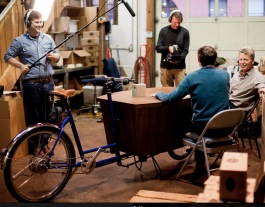 On the set of the “Pedal Powered Talk Show”.
(Photos: Daniel Stark Photography)

Once again proving that cargo bikes can do amazing things, a new talk show is being filmed in Portland — and it’s being done entirely by bike. The table the host sits at, the chairs the guests sit in, and all the production equipment are all built into a cargo bike that was made by hand in Northeast Portland.

If you haven’t guessed by now, this project was conceived by one of the owners of Metrofiets — the same folks behind the Hopworks Beer Bike (and many other creative bike-based businesses) that garnered national headlines back in September 2009.

The Pedal Powered Talk Show is the result of an “early morning brainstorming session” between Metrofiets co-owner Phillip Ross and filmmaker and Boaz Frankel (whom you might recall from his carfree journey across America that he turned into The Un-Road Trip TV series on Halogen).

“We’ve taken the classic talk show format and built it into a cargo bike. With our pedal-powered production studio we can go anywhere and do anything; from talking to notable authors on the side of Mount Hood to interviewing local indie bands on a barge in the Willamette River.” 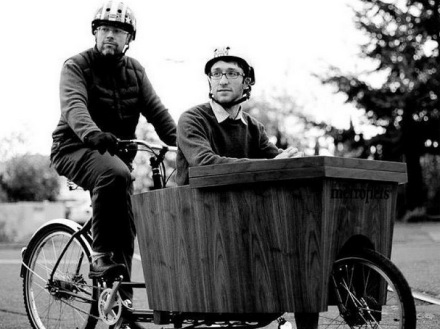 The bike was just completed this week (by Metrofiets’ fabrication ace Jamie Nichols and Wade Beauchamp of Vulture Cycles). It’s eight feet long and weighs about 75 pounds unloaded. Add in the boom mics, cameras and other equipment and Ross says it’s about 150 pounds fully loaded. To keep it riding smooth, they used aircraft grade steel for the frame and the desk was made by North Portland-based company Bamboo Craftsman. Needing a bomber set of wheels, they turned to another local, Jude Kirstein of Sugar Wheel Works. Portland’s Keen Footwear funded the bike’s construction.

Reached via phone this morning, show host Boaz Frankel said the idea for a bike-based production studio came to him during his Un-Road Trip project, where he criss-crossed the states using every vehicle imaginable, except for a car.

“I was getting a lot of press for that project and the thing that struck me was, I’d be kayaking down a river and all these news trucks would be driving up to meet me. I thought, this is weird, I’m not driving but I’m causing all this other driving. It didn’t feel productive. So I wondered, what if there was a mobile bike TV studio instead?” 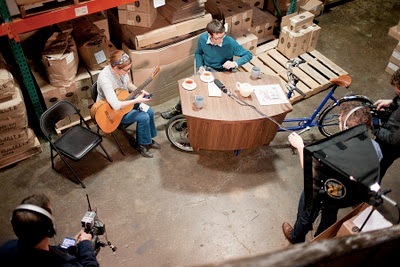 While the show’s content isn’t bike-centric, the bike obviously plays a huge role as both a branding tool and for practical purposes. This afternoon Frankel says they’re filming on top of a downtown hotel and then tomorrow they’ll ride it into the Oregon Museum of Science and Industry.

The Pedal Powered Talk Show will officially launch in January 2012. Follow their progress and learn more at PedalTalkShow.com.

Just to clarify, no one is pedaling to power the lights or microphone in the background? The pedal-powered part is about getting the equipment to the site, right?

That’s right. We hope to get there soon though! If there’s a sponsor who wants to help pay for those modifications they can get in touch!

First thought that passed through my cracked skull when I saw the photo at the top:
“Oh look, we finally have a bike version of Car Talk!”

Why don’t we have some live call-in show for bicycle problems?
You could directly steal their format and it would work perfectly in Portland.

Bike Talk (based on Car Talk) has been a dream of mine for years! I’d love to do something like that!

@q’Tzal and Jonathan Maus
Let’s do it – I know a few folks that can make this happen. 😉 Seriously.

My only relevant skill is having listened to nearly every episode from about 1993-2000.

() The show needs at least 2, possibly 3, crusty old bike mechanics that have a good friendly rapport that includes polite debate.
() Show topics should stick to bike maintenance, gear, fitness and safety topics; digressions in to politics turn BikePortland in to a scrum, we should expect worse on a live call in show.
{
Don’t discuss pro or con for bike helmet use only comparisons of helmets.
}
() The show needs a live internet lackey that can find needed info fast when the hosts are stumped. This day and age that can mean digging PDF manuals out of Shimano’s constantly changing website architecture or watching the shows Twitter feed to see if useful info shows up there.

This is on top of all the normal call-in radio show staff.

All that said, my bike knowledge is only slightly above average.
I’m better at “peanut gallery/Hawkeye Pierce” than direct interaction. Often I’ll go on a tear and keep a group of people laughing themselves silly but not reliably or predictably.

I am, however, very good at finding things as long as I know the correct terminology.

Fantastic! You can roll the studio where you want it. Let me know if I can help. Where can we view it? Can we rebroadcast?

This story stole my thunder a teeny bit because we plan on reviving CrankMyChain! Two-way TV in the next couple weeks for daily live shows. We will lean towards politics and bike-fun and will continue to produce it from the back of the Disco-Trike on occasion. Viewers/listeners will be able video, voice and text chat. Stay tuned for more info.

The first episode is live!
http://bit.ly/wiggjB

To get access to behind the scene footage and photos on location, check out the show’s blog at http://www.pedaltalkshow.com