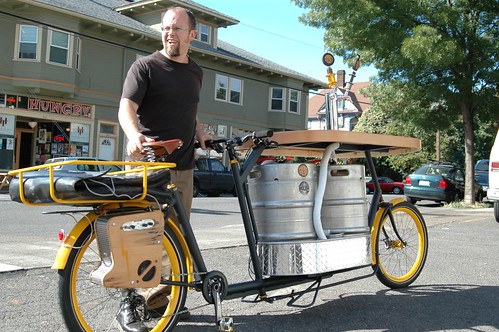 I just witnessed the unveiling of something truly in the Portland spirit: A locally built cargo bike that holds two kegs below an inlaid wood bar. A rear rack is built to hold a stack of pizzas; below that a wood-paneled pannier is in fact a compact sound system.

It’s made in Portland. And it’s beautiful. 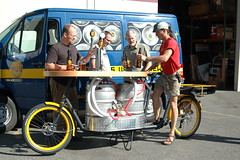 Celebrating the unveiling in style

Described as a “pub bike,” or a “mobile party,” this human powered machine was built by local box bike builder Metrofiets specially for Hopworks Urban Brewing (HUB) and will make its first public appearance at the company’s free Biketobeerfest celebration this Saturday.

The bike follows the basic Metrofiets design of a long body, with a cargo carried in the front. The cargo container is a metal keg bucket which holds two full sized kegs and 25 pounds of ice. Beer from the kegs run through a 50 foot cooling coil and then to your glass via two taps (made by Shimano and Chris King) which protrude from a wooden bar inlaid with HUB’s trademark lightning bolt. 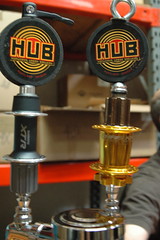 A large, square rear rack is designed to fit a stack of pizza boxes. Below the rack is a sound system “pannier” with another lightning bolt inlaid wood panel casing and a speaker. The bike sports HUB’s colors, matte orange and black.

This party is entirely human-powered, with the help of nine gears — any more would allow a rider to go faster than would be entirely wise, explained Ross. Sturdy looking disc brakes and chunky tires with full fenders adorn both wheels.

When fully loaded with pizza, beer, and ice, the bike should just about meet Metrofiets’ 400lb weight limit. Still, Ross is recommending that the bike be transported with pony kegs, and refilled with full-sized kegs on the scene. 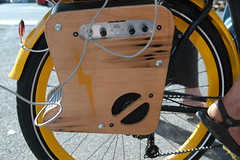 The sound pannier in action

The bike was conceived over the course of casual conversations this summer between Hopworks founder Christian Ettinger and Metrofiets owners Phillip Ross and Jamie Nichols. The idea quickly escalated; then the friends began paring it down to a buildable concept and began lining up support.

The bike is a group effort. Ross and Nichols designed and built the bike. Damon Eckhoff inspired the sound system and did much of the wiring. Metropolis Cycles (2249 N Williams) built the wheels and provided general bike shop support. Michael Moscarelli of local brewing supply company F.H. Steinbarts did the beer plumbing; local high school biology teacher, homebrewer, and woodworker Gregg Heppner created the bar top and sound system shell. The bike’s components (including the tap handles) were donated by Chris King Components and Shimano.

Ettinger still has big plans for the bike’s future. A second sound pannier will allow music to be played in stereo; a solar panel cover for the pizza rack will power the sound system and a string of LED lights around the base of the bar, making the bike fully self-sufficient. 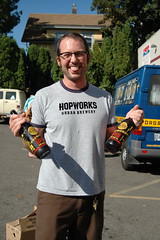 As if the bike isn’t enough, Ettinger plans to unveil his new, seasonal Bike Beer this weekend. The first season’s offering is an organic Pacific Northwest style IPA. It comes in bottles branded with a bike chain motif and the words “Ride your bike,” and features a Portland bike fun event calendar on the back.

The beer was brewed specially for the upcoming Oregon Manifest, and will be the event’s exclusive beer. Its broader intent is to promote Portland’s unique bike culture. “We’re seeking a cross-pollination between the bike and beer cultures,” Ettinger explained.

You can expect to see this season’s Bike Beer at various stores around town in the next month. And keep your eyes peeled for a party on wheels — HUB expects to be bringing its new steed to various bike events year round.

Here’s a photo slideshow of the bike and its happy creators:

It’s important to mention the contribution of Damin Eckhoff http://pdxfuntime.com who not only inspired the sound system but helped Metrofiets design and wire it. Thank you Damon!

someone stab me because this has to be a dream
WOW, insanely impressed
Hats off to the guys at Metrofiets and Hopworks

and so the circle of life continues – one of the original uses of these “long john” style cargo bikes, 100 years ago, was… yup – hauling kegs for breweries.

Just added Damon to the story. And wanted to add a congratulations to the team that made this happen — this sort of thing really is how bikes begin to replace cars in the public imagination, and to do it better.

This is the coolest rig I have ever seen. Well done… I want to ride it.

I will trade my car for this bike!

My heart is aflutter…amazing work, everyone! But here’s my question: will these great minds be taking the pub bike out on one of the Cycle Wild outings?

I sort of want to cry with happy! This is all good things in one place/vehicle. I soooo wish I could go to the biketobeerfest – I’m sure it will be there!

Very cool. But won’t there be a lot of foam to pour after riding the kegs to various locations? Hopefully this works as good as it looks.

whoa. I can’t wait to see it at Bike-to-beer fest on Saturday!

No Stokemonkey? What a glutton for punishment.

Foam and mmm-mmm….warm beer. At any rate, it’s a commendable effort.

Mike over at F.H. Steinbart is a master at building draft systems. He is confident that beer foam will be kept to a minimum with the way he built the draft system.

Of course, there is only one way to find out! Come to the BiKETOBEERFEST September 19, 2009 Noon to TEN pm and see for yourself.

Cheers to Phil, Jamie, Gregg, Dave, Damon, Mike, Chris King and Shimano for making “Beer Pedaler” a reality. This bike has many miles and thousands of organic pints in it’s future. See you at HUB on Saturday for the unveiling.

This is over the top awesome! What a great piece of work. Nice going guys! This takes Portland bike innovation to a new level. Love it.

dude! whoooaaa!! Off the charts, man!

That might be one of the ten coolest things, ever. What a great piece of ingenuity!

i so look forward to biketobeerfest! I already love HUB and this just kicked it even more! See you all there.

Damon Eckhoff is the same guy that led the PDXfuntime Bike Karaoke ride during Pedalpalooza, right? He built a sweet sound system/karaoke machine for that. “Bike Boombox Builder-Guy” is a cool niche.

Umm, hate to be the party pooper, but isn’t it illegal in Oregon to transport tapped kegs or to even transport kegs and have the ability to tap them during transport. I thought I remember some local brewpub chains running into this problem when transporting their kegs from one pub to another.

Can we borrow it for the Midnight Mystery Ride??

Do you need a liquor license for that thing? How cool would it be to ride around Portland and set up bar where ever? Can’t wait to see that thing in action!

They could make it better by actually loading it with a decent beer.

On the same note as Joel above (#3), a bar called the “Slippery Noodle” in Indianapolis still has the ramp intact that allowed such bicycle deliveries to be made directly up into the bar.

And they have a great Corned Beef…

They’ve been doing this in Amsterdam for some time now. Their’s is bigger though, so we need to catch up!! AND, they have a covering for when it rains…HELLO that is so Portland. Get crackin guys

For wsbob’s concerns about warm beer.

“The cargo container is a metal keg bucket which holds two full sized kegs and 25 pounds of ice. Beer from the kegs run through a 50 foot cooling coil and then to your glass”

That’s what’s inside the diamond plate box under the kegs.

yawn. i haul beer and a sound system (that will blow that system away) and free pizza on my tallbike all the time…

deadbuny ever hear this quote?

“Jealousy is the tribute mediocrity pays to genius.”

“Jealousy is the tribute mediocrity pays to genius.”

I would like to see a video of this bike being driven.
With the heavy weight of the full kegs up front, trying to balance, pedal and turn this Beer Bicycle Beast would be a huge challenge. And going up the slopes on the streets of downtown Portland with all that weight? – Good luck with the pedaling.

I would totally date a guy with a bike like that!! (and that’s sayin a lot b/c I am super picky! AND I don’t even like beer!!) :o)

Seems like only yesterday we were crawling around in front of Peets under the old workcycles bakfiets with your camera and tape measure. 😉

@ oldreed #33 and #36 – Gee do you think that was really intelligent enough to have to say it twice.

like I said before, you people sure lead sheltered lives, especially if you think this is groundbreaking news

Just a friendly reminder from your beleaguered editor to steer clear of personally-directed comments. Stick to the topic on hand. Thanks, folks. –Elly

Idea is quite old in Holland we got this http://www.bike4fun.nl/2004_0409Image0045.JPG
nevertheless the pizza rack is solid gold 🙂

1. Awesome!
2. I’m amazed that 2 wheels is enough! would think that it takes some speed to keep it steady!

Wow. Guess I’m late to the party, but how about a shout out for the bike shop that actually put the thing together and made it pedal and brake. Oh, and built the wheels.

Sorry Metropolis! If it wasn’t for Nathan and crew at Metropolis Cycle Repair the Hopworks Bike would not rocking and rolling around PDX.

Metropolis is Amazing and puts up with ALL SORTS of bad behavior from Metrofiets, with grace and aplomb.

You can see for yourself at
2249 N. Williams Ave., between Tillamook and Russell, in Portland, Oregon.

OR visit them online – http://metropoliscycles.com/ on Williams

They rent bikes too!

Thanks Metrofiets. Looking forward to the next build. See you in Vegas!

Right mates! but is it bloody legal?!?

Awesome.
However, somewhat more awesome, though probably far less homegrown, is the pedal pub / bier bike. Check out this video:

in holland we have something like this for a long time.

This is really amazing and deserves a lot of appreciation. I want to congratulate Damon for this wonderful piece of work and wish him best of luck!

Just heard from J. Maus that the @HopworksBrewery bike story took the #1 spot for traffic on @bikeportland in 2009!!! http://tiny.cc/3qG2Q

@BrianR Cool idea. You do the ice cream and I'll handle the beer! http://idek.net/ksv