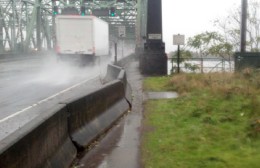 A concrete barricade in the shoulder of the southbound lanes of Interstate 5 on the Columbia River bridge is partially blocking the bike path. Doug Merritt shared a photo of the situation with us this morning and we’ve found out that it’s the result of a motor vehicle collision that occurred over the weekend.

The Washington State Department of Transportation says crews will fix the obstruction, “as soon as they can stop chasing storm drains.”

John Kangas is a Portland resident who commutes into Vancouver. He shared via Facebook this morning that, “This happens a lot this time of year” because people misjudge the onramp onto the bridge and “nudge” the barrier over. Kangas says it’s the third time he’s noticed the barricade hit this year.

WSDOT spokesperson Heidi Sause told us via telephone this morning that maintenance crews know about the situation and they will likely get to it “early next week.” In order to fix it, she says, they must close a single lane and plan traffic detours around it. “And we don’t like to close lanes on the bridge unless we have to.”

They should get some of those plant embankments up there so they don’t have to worry about storm drains that much.

That last line is highly ironic…

Sounds like we need an Occupy the I-5 Bridge action.

Or maybe just a new bridge with bike access that isn’t an afterthought.

Great! Get support for tolling the Minnesota Freeway and a design that doesn’t suck, and we’ll get on that.

better than being hit by the colliding car, eh?

this times one million.

Having been hit by 2 cars I can vouch for this sentiment wholeheartedly!

I think moving the barrier may be more important than clearing storm drains. While it isn’t really a barrier for a bike, imagine if you wheelchair bound and for some reason have to cross the i-5 bridge. That wet grass could trap a wheel.

If the barricade were pushed out the other direction Id bet it would be fixed by now.

It’d just take a “nudge” to move it back!

In other news from last night:
-The county health building got nudged. http://twitpic.com/7ifo18

-A pedestrian was nudged to death on Powell. http://bit.ly/rVqJEU

The Police report about the Powell “nudge” says the woman was not in a crosswalk, but says it was at the intersection of 31st and Powell. I thought all intersections were crosswalks, even if unmarked? Will the PPB correct this?

Looks like a crosswalk on both sides of the intersection, east side is marked, west side is unmarked. Unless there’s a CROSSWALK CLOSED sign I’m not aware of. http://mapq.st/rzY04u

I think this would be a good test of our theory. Anyone up for a bit of guerilla nudging?

Curious what one of those things weighs and what the drag coefficient is.

For one reason or another, I’ve had to take the grass on every one of my trips along the west side of the bridge. This would just be a new one.

You must not take many trips across the bridge. I ride this as often as five days per week (including today) and this week is the first time I have had to ride on the grass this year in this section. I am grateful for the good, usually prompt response I get from maintenance at the DOTs. It’s not a job I’d care to do.

How about the Occupy fence barricade that’s almost completely blocking the bike lane on Madison.

Hasn’t that been removed? It was supposed to be. Please let me know if it’s still there.

The fences and supports were on the sidewalk yesterday (11/22) afternoon when I rode through. Bike lane was clear – except for leaves and the usual debris.

I was going to propose a bunch of people just shove the barriers back; not so much now.

A quick search shows that these are 10’~12′ long linked concrete barriers.
Standard weight for these is about 400lb a foot or around 4000 to 4800 for a single barrier.
Add starting friction and the weight of the linked barriers and I gotta ask:
How’s the other guy?

Makes you wonder why people continue to insist that a thin stripe of paint is usually all we need to protect us from cars.

Because at non-freeway speeds (or on modern freeway designs), it essentially is. This segment (technically not part of I 5, but a part of OR 99) lacks 20-foot paved shoulders (or any shoulder at all here!) and bike-gapped rumble strips that make a modern freeway, (or even current interstate freeway design), requirements (which is why the segment between WA 14 and MLK is technically OR 99 and not I 5).

It is true that this section of Interstate 5 does not meet modern interstate standards. After all it was constructed over 50 years ago.

The claim that the road between SR 14 and Marine Drive is not I-5, but rather Highway 99 is completely BOGUS!.

It is Interstate 5. You can verify this on ODOT’s website. Check Appendix D of the State Highway Plan or the Portland map found in the “map” library on the ODOT website.

Your “tecnically” claim is completly untrue.

The resolution is so poor I can’t read any of the sign.

My references proving that the Interstate Bridge is I-5 include:

The ODOT map showing the mile posts and other features including the Interstate symbol can be found at:

Is there something under the barrier that is pushed out also? It’s a little hard to tell from the photo. Is it safe there? Perhaps they should make this a higher priority?

If the barricades were moved to block I5 traffic, I am sure they would drop everything to move them back, one again proving cars take precedence over anything else.

The bike lane is a traffic lane, too.