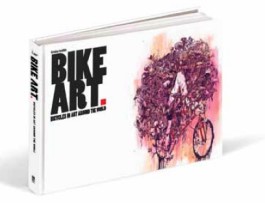 A new book published by Gingko Press has done something amazing. The 256 page coffee table book, Bike Art. Bicycles in Art Around the World has managed to collect a global sampling of bike-inspired art from more than 250 illustrators, painters, sculptors, industrial designers, and more.
Here’s the publisher’s blurb:

“There is an element of fanaticism in bicycle culture rarely seen among the varied forms of locomotion. A love affair of sorts develops between rider and bike, with all the constituent parts: obsession, devotion and longing. In extreme cases, hospitalization is required — among the more restrained, bicycle becomes muse, inspiring great works of art in a variety of media, all in an attempt to capture the spirit of the infatuation.”

We get sent quite a few bike books here at BikePortland, and they’re all wonderful in their own way, but this one really stands out. Each page features a huge spread of the artists’ work and a short bio by the book’s author, Greek muralist Kiriakos Iosifidis (or sometimes in the words of the artists’ themselves). 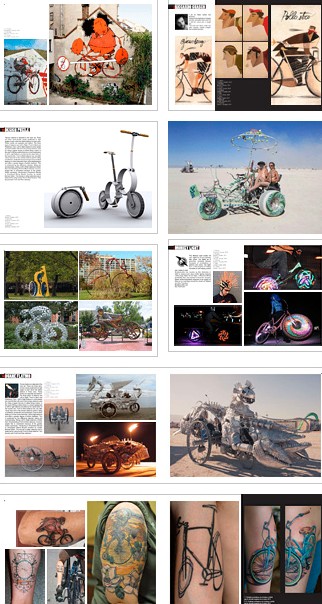 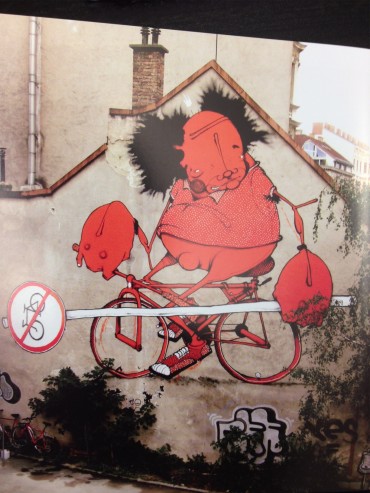 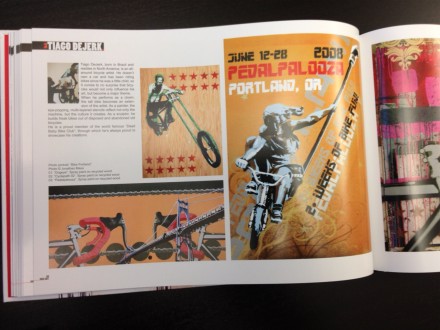 If you follow urban bike culture, you’ll recognize some of the names in the book. I was happy to see famed Italian bike maker Dario Pegoretti was included as were local stencil painter Tiago DeJerk (including a photo of him doing a mural in my old office!) and sculpture Matt Cartwright (famous for the bike sculptures atop River City Bicycles among other works).

Other artists you might be familiar with are Dan Goldwater of Monkey Electric lights, helmet painter Danielle Baskin (she was BikeCraft last year), and the talented duo behind the massive “Cyclisk” obelisk in Santa Rosa California.

While it’s neat to see names I recognize in an international art book, I’ll savor ‘Bike Art’ because of all the artists and works I’ve never seen before.

The book is meticulously curated and broken into sections for urban art and graffiti; illustrations, drawings and comics; tattoos; sculptures; different styles of bikes; and a fun “Extra” section in the back that includes a nod to Critical Mass, Bicycle Ballet, and more.

Bike Art is available for pre-order for $34.95 from Powells.com. You can also learn more about the book and get more previews at GingoPress.com.

Glad to see that Tiago is in this!!

Damn! Where did you get yours? I’ve been waiting patiently for my copy to arrive!

So proud of Portland artist Alison Gayne for her contribution to this awesome book. We had a show of her bicycle art at BIKEASAURUS a few months ago and were so pleased to find out that it would be included in the book! Check out her art- http://alisongayne.com/