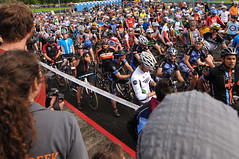 The popularity of cyclocross
continues to grow.
(Photos © J. Maus)

The numbers are in and they show another year of very healthy growth for the Cross Crusade cyclocross race series. According to a tally by Oregon Bicycle Racing Association officials, 9,542 people participated in the series this year — that’s over 800 more than last year.

For a wider perspective on how much cyclocross has grown in Portland, in 2005, the Crusade series had just 3,579 participants. 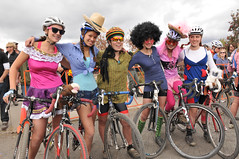 Bend did not disappoint.

This year’s big numbers were helped by a successful move of the two-race Halloween weekend to Bend. According to series director Brad Ross, the 2010 Halloween weekend in Astoria drew about 1,400 total racers. This year in Bend there were just under 2,000 racers.

The most well-attended race this year was once again the series opener at Alpenrose which had 1,497 participants (well off the last year’s record of 1,762). Close behind Alpenrose was the third stop in the series at Portland International Raceway where 1,476 people showed up. 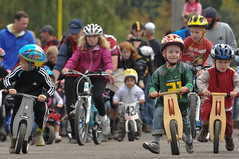 Ross says the weather gods definitely played a role in this year’s numbers. “One thing that I think helped us was the weather. We were blessed every single weekend.”

Unlike some of the very wet and muddy conditions in years’ past; none of this year’s races turned into a major mud bog.

Rick Potestio, who co-founded the Crusade with Russ Humberston in 1993, says not only were racer numbers up this year but there were more spectators than ever. Potestio says he’s most excited about the youth movement.

The Crusade has partnered with the Bicycle Transportation Alliance to run the Kids Cross event. At about 250 racers each weekend, it has become the largest category. Not surprisingly, the rise in Kids Cross participation has resulted in a swelling Junior class as the little ones move up. Juniors are aged 10-18 and the fields get larger and more competitive each season.

“My prediction is that in about two years we will be fielding over 100 juniors. It’s very exciting,” says Potestio.

What’s notable about the Portland and Oregon cyclocross scene is that this growth in the Cross Crusade comes as more races than ever fill out the calendar; like the nine-race Gran Prix Molly Cameron series. There were many weekends this season where racers could race both days — and many times they could choose between two races happening on the same day.

Too many races is a nice problem to have here in the ‘cross-crazy Pacific Northwest.

I don’t understand why we can’t click on photos to make them larger. What’s the point of posting all of these cool photos if all that’s viewable is a tiny thumbnail? Feels like this website was made 10 years ago.