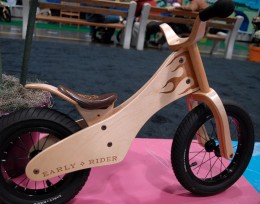 “Our ambition is to get every child mobile, without using stabilizers,” said Early Rider founder Andy Loveland. “We have combined British innovation with West Coast style and world-leading manufacturing.” 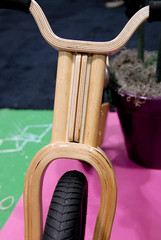 John Byfield, Sales Manager at Cyclone says he’s excited to have the Early Rider. “They’re a super high-quality bike and they appeal to kids and parents. Dad gets excited about the quality and the kids like them because of the flames and other features.”

Early Riders retail between $160 to $200, which is more expensive than others on the market, but Byfield says, it’s well worth it. “You can hand it down through a few kids, and maybe even grandkids.”

Byfield says Early Rider has plans to expand into a belt-driven pedal bike and an aluminum balance bike. The bikes are designed in England and manufactured out of FSC certified marine-grade plywood at Early Rider’s factory in China.

Early Rider’s bikes caught my eye when they brought them to the 2010 Pedal Nation bike show.

Wooden balance bikes are a natural fit for Portland: We’re bike crazy, family biking has taken off, and we’ve got a notable legacy of being a timber town and a bike building mecca. While I’m still dreaming that someone will make wooden balance bikes here in Portland, I’m glad to see that at least a local company is involved with selling them.

cool! where can I go with my kid to fit one?

Come down to River City Bicycles Outlet.
We’ve got a couple in stock.

For $160, that’s decent quality. I like the idea of pneumatic tires, but people tend to be notoriously bad about letting their kids bikes tires run low on air almost the point of being flat before they get around to airing them up.

Oregon timber counties probably have the know-how to make the marine grade plywood for the bike frames. Maybe some of those counties did make the plywood for these bikes. Fab and assembly looks like something Oregon people could be doing.

I don’t see how these are a good value when compared to the Aluminum version that Specialized has. Those have a real “headset” and it’s welded not screwed and will last way longer.

Maybe you’re right, and it’s not a good value. That kind of quality assembly may be overkill for a bike whose purpose is likely intended for kids 2 or 3 years old, rather than adult zoobombers in their teens, 20’s and 30’s.

James just below…good point about splintering with a wood frame, but how does that happen with a bike that for its intended purpose, probably isn’t going to top 5-6 mph?

Kids under 3 have trouble picking those bikes up. The weight to kid strength ratio is way off. It would be like you riding a 60 lb bike.

Then there’s a similar shaped but different model called the ‘Evolution’ that the company says a kid 5.5 years can ride. The kid shown in the picture sitting on it looks big…long legs. Maybe it’s Zaphod’s kid. I’ll have to agree, it definitely appears as though the kid shown on that bike will be looking for opportunities to get the wood bike going faster than 6mph. Some factory crash testing of the bikes might be a good idea.

I enjoyed the background settings for the bikes…the old workshop…the lunch wagon with the bike up against a guardrail…locking chain wrapped around the bike frame.

I have seen what happens to these wooden “bikes” and it’s not pretty with all the splintering etc. I agree that the metal versions are a much better value, and that’s why you mostly see metal balance bikes a the shops. I also don’t see why you would need sealed hub bearings and aluminum rims when the child is only supposed to use the thing for a very short time.

Maybe a Skuut would splinter, but splintering on marine grade plywood? What kind of canoes are you buying sir?

This thing’s biggest flaw is what it shares in common with the balance bike that started it all, it’s made of wood. The Skuut bike was an awesome idea when it came out. They were very popular where I worked at the time. We saw and heard about them being fragile when dropped and as James stated, splintering. I agree the wood looks way cooler then a steel frame but we all no kids aren’t easy on things. They need durability.

The Skuut was an inexpensive knock off of the Like-A-Bike, which, as far as I can tell, actually did start it all.

No, they retail for about $300. Still very expensive, but not as much as you suggested.

This is the stuff that they make canoes and sailboats out of. Marine grade is a rating that is not to be sniffed at.

{Ahem}… kids will ride the sh** out of anything. My kids have bombed one of these down a grassy hill with some respectable speed where failure would have equated to carnage. I’d at least double if not triple that value.

Just take the pedals off a standard kids bike and you get the same thing.

And the child is learning how to balance the bike that they will soon ride by pedaling.

Until the cranks hit them in the ankles, at least.

Then you can have a shop remove the whole crank if you can’t do it your self.

A simple solution, much cheaper than buying a balancing bike. It’s a solution in search of a problem.

… at which point you will have spent as much as the entire balance bike. How much do you think a shop would charge to remove a non-cartridge BB? (the re-install it later).

Besides, the geometry of a balance bike is different anyways. The BB drop is super low to make it really, really easy for tiny kids to ride them. Think 2 year olds, not 4 year olds.

Yup, when I see those Chris-Crafts from 1940 out on the water there are splinters flying all over the place. Really, unless you’re an engineer with testing data your opinion is conjecture. Also, when was the last time someone sustainably harvested aluminum. Some folks will look for damn near anything to b!tch about.

Hear, Hear Case, and i think most of them are on drugs too! 1. Skateboards for instance, Seems no one here has heard of or seen them. splinters!! jeez.
2. Sealed bearing hubs. Kids don’t need ‘um damn it!
3. Weight. These things are heavy!! What kids bike is not in general???
Unless your father is Sasha White making you some bitchin’ ti bits!!
My Apple Krate was impossible to lift with my pencil like arms!!

I wonder when a Portland manufacture/ retailer will start importing German balancing bikes, eg from Puky. These are the best quality (metal frames). We brought one from Germany when my daughter was 2. They are awesome to teach kids balancing. When she was 4 we put her on her regular bike without training wheels and she just took off! In Germany, all kids start on balancing bike and have been for the last 10 years. By the time they are3 or 4 they ride a regular bike to preschool and you rarely see any training wheels. In fact, Germans think that cause more harm than good.

A lively discussion is a good thing! The quality of the Early Rider is impeccable, and the FSC Certified marine grade plywood would not splinter under virtually any circumstances. The product has been very well thought out for children and there are no sharp edges and all the bolts that hold it together have flush recessed heads to insure safety. While some may consider the sealed hubs and alloy rims overkill, these bikes are designed to be handed down to more than one child, therefore making the initial cost a much greater value than some of the cheaper ones that will barely make it through one child. I encourage you to check one out at your local bike shop!

Balance bikes and little kids are a great match. My one concern on the wooden bikes would be durability.

I’ve had a lot of success with my nieces as well as a host of other kids at bike rodeos and educational events with the Strider bikes… Our advocacy group got one of these to use at outreach events, and now we’re running a fleet of three of them, with kids still waiting in line for a turn to ride. They’re also great for kiddie “zoobombing…”

We’ve been using wooden balance bikes bought from a Lidl store for several years (3, I think). No splinters yet, in spite of much enthusiastic use by younger siblings of members.

Training wheels are the instrument of the Devil! Make them illegal!
Torch any store selling them!

I don’t think the green movement in Portland wants any connection to being a “timber town”. Loggers are hated here.

We have an early rider lite balance bike. The rear wheel bolt came out and is lost. Do you stock spares for these bikes?