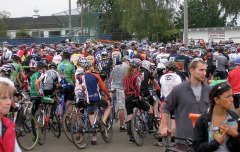 By all accounts, yesterday’s opening event of the Cross Crusade cyclocross series out at Alpenrose Dairy was an immense success. The number of racers, 1,506, was yet another a single-day participation record (last year 1,438 racers showed up).

In addition to the 1,500-plus adults, 256 kids lined up for the “Kiddie Kilo” which makes it clear that the future of cyclocross is also in good hands.

This huge turnout at Alpenrose comes just a few days after the mid-week Blind Date at the Dairy (same venue) series kicked off with a swell in registrations over last year. 273 racers took part in the first Blind Date race in 2009 and according to OBRA, there were 413 riders this time around. That’s 413 people who raced cyclocross on a Wednesday after work! Awesome.

‘Cross season is going to be insane this year. Good thing we’re lucky enough here in Oregon to have an excellent racing organization, top-notch promoters and a racing community that is extremely supportive and vibrant. Next week, the Cross Crusade heads north to Rainer, Oregon for stop number two in the eight race series.

For a full lowdown of who won what and other details from Alpenrose, check out the coverage and photos from Josh Liberles at Cyclocross Magazine and from Pat Malach at Oregon Cycling Action.

Riding on that velodrome is no joke! I bit it hard in the first lap of the beginner’s race on a corner that was later changed to force people to slow down. Wish I got there later!

After the race, I talked to some guys who liked cyclocross better than road racing because the people are friendly and it’s an awesome environment. They called it the “softball of bike racing.”

So far I feel like it’s the Fight Club of bike racing: me versus the ground.

But for some reason, I’m loving it!

Somehow the Crusaders pulled off squeezing another hundred racers into that space. Race course and event was better than ever. How cool is it that 250 kids rode a lap?

I found this today. I was not able to attend this year because of a knee injury. :'(

Wife found out I was not competing and thus made plans for me that day.

…oops I forgot the link to the video from my previous post. Sorry.

You can also see amazing photographs of Portland cyclocross at pdxcross.com

Shoulda posted this here earlier. Guess I am now.