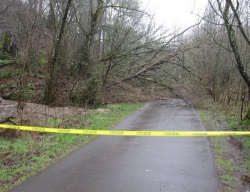 A mutli-use path that connects SE Milwaukie Avenue to the Springwater Trail north of Sellwood is closed indefinitely due a massive landslide.

Early this morning, we received an email from a reader saying that the landslide is completely blocking the trail. “Downed trees, much debris and heavy flooding (more than usual for this section). Most of the hillside came down and there is still a danger from rolling rocks and a precarious tree… this is going to be a big cleanup job.”

We notified Portland Parks and Recreation about the issue and spokesperson Beth Sorensen says they have determined that the slide it still active and they have closed the trail completely for the public’s safety until further notice. 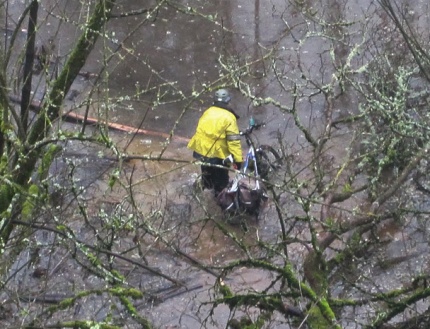 A man tries to get through landslide with his bicycle.

“Until the situation with the landslide stabilizes, our crews can not access the site to begin clean-up of the debris to clear the trail… We’re hoping that can begin soon, but there’s no way of telling immediately while the rain continues.”

The location of this landslide is in the same general area of major flooding that occurred back in December.

Sorensen reminds trail users that there is not alternative detour around this slide. The route options are to either stay on the Spingwater or use on-street routes.

We’ll have a photo of the area ASAP and will update this story as we know more.

The only bad things in my opinion about the physical climate in the Northwest are the landslides and the chance of earthquakes. Bummer about the trail, but what can you do? Maybe break out the knobby tires?

Confused about the location- is this the Oaks Bottom nature trail that was under water a few months ago?

Thanks for the heads-up, that’s my evening commute.

Yes. Same location. I’ve updated the story with that information and a link to my story on that flooding incident.

i came thru this section about 10:30 this morn
a few downed trees blocking the path and water up to my hubs for about 100 feet. very muddy path (almost ate my shoes) around the mess

Too bad, I rode this for the 1st and apparently last time on Friday. Was looking forward to the shortcut from my hood down to the SW… hope it gets fixed in Spring.

I talked to someone who said he was “Parks Security”. He said the slide happened late last night. There’s another smaller slide starting up the trail about .25 miles from where the big one is. The landowners there had been trying for a while to stabilize the hill with various techniques, but it seems it was unsuccessful.

So is the Springwater trail closed as well? Didn’t see confirmation or negation.

No. Springwater on Willamette is not closed.. just the connector trail that leads up to SE Milwaukie.

Where’s K’tesh with his knife? Wouldn’t surprise me if he keeps a water pump in his bag, too.

What are the endpoints of the closure? I’d like to update OpenCycleMap.

OK, it’s on the map. It should be on the next Lambertus garmin update, about the only Garmin maps that get bicycle routing right.

Assume they’d be where the path intersects the Springwater and at the Oaks Bottom parking lot on Milwaukie.

I love that dude is trying to wade through that mess…..uh turnaround perhaps?

the closure is NOT noted at either end of the springwater trail, meaning if you normally take the oaks bottom spur, you’re backtracking or heading all the way to sellwood and looping back. its a fairly substantial detour–the City SHOULD have posted signs accordingly.

This is my daily commute route. After trying surface streets yesterday and this morning, I’ve resolved to just backtrack to Sellwood and pick up the SW trail there. Dealing with angry people in their cars as they crawl toward downtown just is no way to start or end the work day.

Any ideas about a good route for getting downtown? Took Milwaukie up to Division today, even off commuting hours there were a few scary moments.

FYI, the trail was opened briefly a week or two ago but has been closed again.

I think it would be very to easy for the city to clear the problem and reopen this popular connector to the Springwater. Not sure what the hold up is.

I was jogging this trail most days before the closure. Would frequently see surveyors and parks personnel out measuring the hill that slid. The holdup is that there are a couple of houses positioned precariously at the edge of the slope that could slide right down onto the trail and kill anybody who happened to be on it at the time.
Until the weather dries out, it is *not safe* for work crews. Even dry, taking appropriate precautions will slow cleanup.
Construction will be needed to fix the problem on the slope, or it’ll just be worse when the rain picks up again, now that the trees (which slid) aren’t holding back the erosion.
It is a very substantial detour for all of us who live in the South Brooklyn area.

There is a crew out there clearing the tree this morning so I think the connector could be reopened soon. When the barricades come down I’ll post here.

Yeah, just had a great jog this Sunday. Beautiful day on the trail. Puddles have all dried out, too. I kind of expect this to happen again next rainy season, though, unless that cliff gets some love. Cement-shoring-up love.