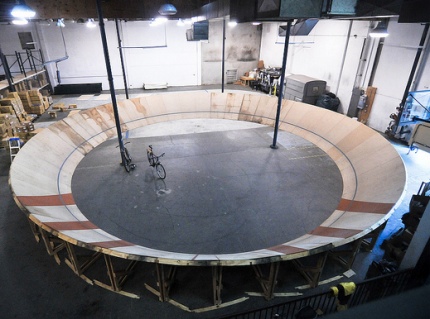 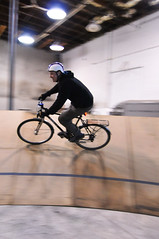 Erik Olson gives it a whirl.

Portland is now home to a unique piece of art from California known as Circulus. The 132-foot circumference miniature wooden velodrome was the senior thesis project of Pomona College student Sam Starr. Back in January, we shared the news that locally-based bike company Portland Design Works decided to buy Circulus and bring it back to Portland.

After tracking down the velodrome’s 39 individual pieces (weighing about 70 pounds each) in California and loading them onto a moving truck, PDW co-founder Dan Powell says it took him and a crew of friends about nine hours to assemble it over the weekend. After much fidgeting to make all the pieces fit together just right, and finding a large enough space for it in their warehouse, the Circulus is now fully assembled and rideable. 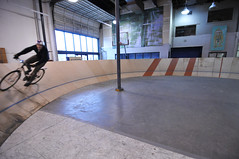 The plywood riding surface on Circulus is pitched at a constant 45-degree angle. Unlike standard velodromes, it’s a continuous circle, which makes riding on it quite challenging: or at least it seems challenging. I didn’t have the guts to try it myself.

Describing how the forces of nature act on him while pedaling fast circles, Olson said, “As you go faster, it wants to push you out and up… It’s more like a circus ride than a velodrome.” If Olson was scared, his ear-to-ear grin was hiding it pretty well.

“We didn’t expect that sort of interest when we bought it… We just wanted it, because, well, why not?”
— Dan Powell, Portland Design Works

While the Circulus is no doubt a very cool thing, it begs the question, ‘Why?’ PDW is a small, up-and-coming company that recently made a big move from a shared shop in Southeast Portland to their own building. Why would a small company spend the time and money (Powell says it cost him about $3,500 to get Circulus to Portland) on what seems like such a silly extravagance?

It’s actually not that hard to make a business case for Circulus. It’s all about branding. 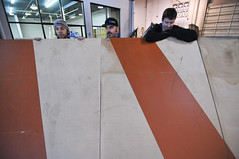 When a video surfaced about the project last year, Powell was intrigued. That video was viewed by 10,000 people in its first week. Powell says they’ve already been contacted by Interbike and the two are in negotiations to set up the Circulus on the show floor this fall. Several magazines have also been in touch wanting to do feature stories. “We didn’t expect that sort of interest when we bought it… We just wanted it, because, well, why not?”

Current plans are to keep it assembled for a short time and then take it down and store it somewhere off-site. A big event is already being planned for this summer: think circus big top, a ringmaster, and all sorts of other shenanigans.


Circulus Teaser from PDW on Vimeo.

Did Erik Olson mention how dizzy the Circulus makes you?

Maybe we can have events like this at Circulus…

Can I come by after work and give it a whirl? I live 2 blocks away!

I want to take my stoked bakfeits on it…..can I? Please can I?

now taking donations for many mattresses for the floor and walls surrounding this affair. I’m thinking youtube video montages of riders leaving orbit from the track would be cool. long as no one gets hurt.

Winter training for the track season!

It might be real fun on a very low slung recumbent, less centrifugal force, poosibly.

does anyone else feel that having 2 steel support beams in the middle of the track is a somewhat bad idea?

Jeff. They had to put the track somewhere and that’s the only place it would fit. Obviously if this was its permanent home – or if they did a lot more riding on it – they would pad those poles. And yes, they are smart enough to know that those poles pose a hazard.

The whole thing is a bad idea, which is what makes it so much fun.

honestly, if you manage to hit those, riding off the inside of a track thats constantly trying to push you to the outside, you have done *something* to anger the gods of physics, and deserve your fate.

…that is why I always wear a helmet and one of those sumo suits when I’m walking, just in case I fall over and hit something… Add fire and broken glass for even more fun!

I was going to comment that I liked the street course and the bowl that DOS had in there previously, oh well life goes on

This is pretty cool, and follows a legacy of that space hosting complex wooden structures for recreation. But to be honest, the amazing indoor skatepark that previously occupied the space was more technically interesting, though maybe not as dizziness inducing. I hope that the huge indoor wooden skate bowl there previously is also being appreciated somewhere…

We tried for just one pole in the center, but the track just wouldn’t fit. In the future, we’re going for no poles at all. However the original installation in LA had 4 poles. Regardless, we’ll be padding the poles in the next few days.

The skate bowl is still here, as is the 1/4 pipe. We are currently appreciating it. The street park that was in what is now our warehouse is being rebuilt in another part of town, keep an eye out for that.

Wow, this thing is awesome – I appreciated the original article as well.

I’d love to get the chance to ride it some time.

Awesome – glad to hear that some of the other pieces of the skatepark are being used, and that you (and bikes) can enjoy it!

JV, and skateboards too.

Include it in the Oregon Manifest course!

Tallbike jousting, with one going clockwise and the other anti-clockwise!

NEED TO feed me beers to ride on that. haha

“Tallbike jousting, with one going clockwise and the other anti-clockwise!”

Yes. but with FOUR PEOPLE!!! GWAAARRRRRR!!!!

Now what? Now a bike accessory company gets at least $3500 worth of hype.

Considering the legs this story has I’d say it’s more like tens of thousands of dollars worth of PR. From a publicity standpoint it’s brilliant.
Still, I doubt I’d ever give it a go myself.

Take a look at http://www.britishcycling.org.uk/track/article/tra20110119-Red-Bull-Mini-Drome-Wows-Spectators-0
Track only 25m long (not 14m as in webpage)

As soon as I saw the original video i thought it’d be fun to ride on my big dummy. Then I see PDW bought it, set it up & the first video is someone riding on a BD! I guess I’m not that original. This is wholly and completely awesome. I hope PDW opens it up to idiots & fans like myself. Is PDW the coolest company in PDX? I think they just may be…