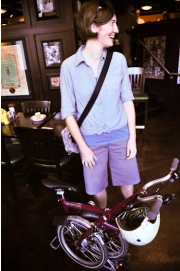 Russ Roca and Laura Crawford are the dynamic bike traveling duo behind Path Less Pedaled. Back in 2009, they sold all their stuff, hopped on their bikes, and lived on their bikes while touring around the U.S. for 15 months. (I sat down with Roca for an interview back in August as they embarked on their journey.)

In Austin for NAHBS, Roca and Crawford (who are currently living in Portland) have just announced their next big trip: “Big Adventure. Small Wheels.” With new, 16-inch folding bikes supplied by Brompton, they will ride across the country and “redefine the American road trip.”

Roca and Crawford have been living in Portland for the past few months getting ready for this trip. They’ve done several bike-camping trips using transit to get clear of the city and expand the range of their weekend tours. Their next adventure will take that idea one step further, using their suitcase-sized Bromptons and Amtrak trains, they’ll bring the idea of bike-transit-touring to a whole new audience. “We want to show that car-less travel is not only possible,” they said in a press release, “but is a viable and adventurous way to travel.”

They better name one of the bikes “Pee Wee”. Russ said the next CycleWild trip will be a mini dress rehearsal for loading the Bromptons . . . I will take pictures!

How are most US trains for transporting regular sized bikes? My only experience has been going from Portland to Eugene, and it couldn’t have been any easier – $5 for a porter to put my bike in the luggage car.

So-so.
There’s a few lines in the Amtrak system where you can wheel on unboxed bikes, like Cascades (Eugene-PDX-Seattle-Vancouver), some of the California lines (Capitol Corridor, Pacific Surfliner, San Joaquins), and a handful of routes in the Midwest and East Coast.

The rest you’ll have to box the bike, which is a $5 fee (plus $15 if you need to buy the box from Amtrak.) This is only available on lines with checked luggage service, and you can only use it if both the departure and arrival station offer checked bag service.

The beauty of using a Brompton with Amtrak is that it can be brought onboard as carry-on luggage. So no worrying about bike racks, boxing bikes, or checked bag service.

How broken down must bikes be in those boxes? I am guessing handbars, pedals, front wheel? I am planning a trip for this spring, and was going to ride the Coast Starlight route, which apparently only offers boxed bike service.

Many shops will box-up a bike for you for a small charge ($25 or so is what we used to charge). But yeah, bars, saddle, pedal, front wheel all come off. Shift into your largest cog to get the rear derailleur out of harms way. Etc.

Actually, saddles and wheels don’t come off according to Amtrak site. Only pedals, and turn bars to the side. So all you need is a pedal wrench (or an adjustable skinny enough to fit between the pedal & the crank), and a way of turning your bars. You may need to drop your saddle, so whatever it takes to adjust that too.

What Esther said.
The Amtrak boxes are much bigger than regular bike boxes. So no disassembly required. And none of the headaches of boxing a bike for the airline!

Small wheels and trains make a great combination.
I took my folder/touring bike on a camping trip, and utilizing Amtrak twice last year. There is a post about it here:
http://www.crazyguyonabike.com/doc/?o=RrzKj&doc_id=6760&v=9j

Drew,
That’s an awesome trip! We did something similar before we left on our big trip. We took the Amtrak to SLO rode to Paso Robles for the Great Western Bike Rally, then rode through the Carizzo Plain to Pine Mountain and Ventura.

Check out the photos here: