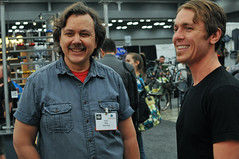 There are a lot of amazing bikes here at NAHBS made by builders from all over the country; but I wanted to start our show coverage off by focusing on Oregon. As an Oregonian myself, and as someone who has followed local bike builders for many years — seeing several of them grow from an idea to a mature business — I have a special sense of pride for each of them.

Oregon is home to a wide range of bike builders known for their innovation and precision and revered by bike lovers both for their aesthetics, artistry and innovative ideas. Here are some of the Oregon builders I ran into on the NAHBS floor this morning…

Sean specializes in titanium. Since he launched Vertigo three years ago, Sean has made a name for himself by coming up with nifty solutions to problems. Case in point is his collaboration with Cane Creek last year to allow builders to use a straight gauge head tube with forks that have a tapered steerer. This morning he showed me a chain tensioner that’s integrated into an axle skewer cap. It’s an elegant solution for bikes with horizontal dropouts. He hopes to sell the idea as a parts kit to other builders.

Sean has also developed a hitchhiker accessory that would allow you to easily carry a bike with a bike. Attach his simple assembly to your existing rear axle, attach the extra bike’s forks to the skewer, and off you go. “I have a habit of coming up with these ideas, but I’ve never sold or licensed them. I’ve got to stop doing that,” he said, “but I’m usually just so excited to share them.”

Wade’s unorthodox creations have always caught my eye; but this year he’s gone a new direction. He made a mixte bike for his girlfriend. He calls it the “skirt bike.” “I’ve made some pretty brutal, gnarly-ass bikes,” he said of his usual style, “but this shows I can make pretty-ass bikes too.” See the video below for more from Wade on his skirt bike. 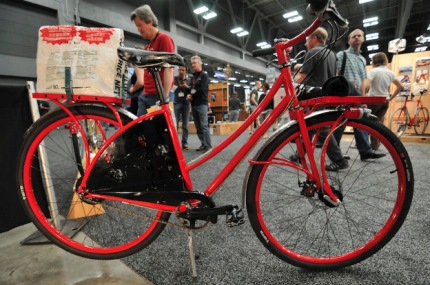 Also in the Vulture booth was his seven-footer tall bike. At 6-foot 2, Wade’s head is still almost a foot lower than the grips of that thing! He said he was inspired to build it after seeing bikes made by Portland-based bike gang, the Dropouts at a bike show in 2008.

Dave is veteran builder who moved to Portland from Seattle a few years back. He’s showing off some gorgeous work. Of particular note is his belt-drive, 29-inch wheel mountain bike. Check out the twin-tube rigid fork and the extended seattube and downtube. Dave shows off his versatility with a titanium touring bike with some very special, one-off, cromoly racks.

After launching just over three years ago, Signal Cycles is ready for the next level. They launched their first production bike model at the show today. Dubbed, “Saltzman” after their favorite road in Forest Park, the bike is meant to have the same quality and Portland-made vibe as their fully custom bikes, but with a more accessible price. Starting at $3,300, the Saltzman affords customers the convenience of quicker delivery and limited color and size options. “It’s the bike your mechanic rides,” say Nate and Matt.

The Saltzman is a big move for this small, two-man operation. “We’ve done a lot in the last few years,” says Matt, “But this is a major step for us.”

See more photos of bikes and builders at NAHBS in our photo gallery. Follow all of our NAHBS coverage here.

Great story. It’s good to see some outside of the box thinking.

Nice overview – I hope NAHBS eventually cycles back through Portland.

I love that it’s February and they’re all in shorts and t-shirts.

I didn’t! At least not in photos… But yes, I left him off the list. My mistake. Added. Thanks for catching that.