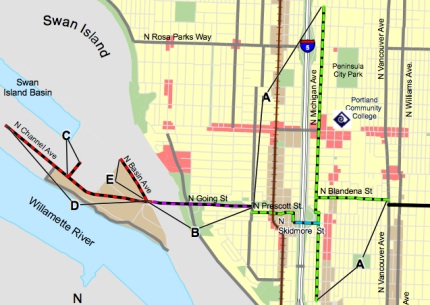 The Oregon Department of Transportation (ODOT) has decided on their list of recommended projects to receive just under $21 million from their Federal Flexible Funds program. Among them is the Portland Bureau of Transportation’s $2.33 million “Going to the River” project.

Going Street and sidewalk as it looks today.

Back in May, we reported that this project would “transform” Swan Island access — and that was before PBOT made it even better. To give you a sense of how exciting this project is, let me share one line from PBOT’s grant application:

“Once complete, the Going to the River project will provide a seamless route on Going St. from NE 72nd Ave all the way to the Willamette River.”

Sounds great right? But wait, there’s more. Here are the other elements (taken from PBOT grant, which you can download here (PDF)): 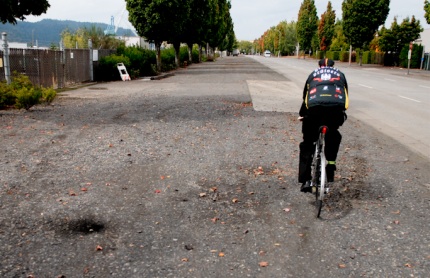 Making this project even better is a traffic modeling analysis from PBOT that showed a reduction of 22,000 vehicle miles traveled (VMT) and a reduction of 11 tons of greenhouse gas emissions per day once the project is fully built. That equates to about 456,000 gallons of gas saved every year (and $1.4 million in saved money that stays in our local economy). 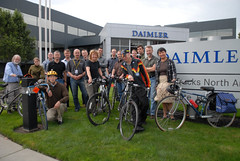 Swan Island is home to 10,000 employees — all of whom will be much more likely to try bicycling if accessible facilities existed.

This project enjoys broad support from the community, including Vigor Industrial, the Multnomah County Health Department, the Swan Island Business Association, and others.

In total, the ODOT sifted through 115 applications for over $83 million before whittling the list down to 28 projects. The funds are part of a newly created Federal Flexible Funds Program that ODOT set aside solely for transit, biking, walking, and transportation demand management projects.

From here, the list of recommended projects goes to the Oregon Transportation Commission (OTC) where it requires final approval. There’s a public hearing on the projects slated for January 19th and the OTC will make their final approval of the list at their February meeting. If this project gets the green light, construction could start in September of this year and PBOT estimates it could be completed by May 2012.

Stay tuned. This will definitely be something to celebrate once it’s 100% official.

Up until 2 years ago, I worked down on Swan Island, and commuted by bike in from Tigard during the better weather months. It sounds like these improvements will transform the area. Hopefully the businesses down there will embrace and promote cycling and provide the necessary support to encourage more two-wheeled commuters if all of these proposed changes become a reality.

My partner works at Daimler, and would like to try bike commuting to work from our house in Tigard. The problem is, finding a safe route for the wee hours of the morning to work, and the later afternoon slog home!

All that aside, this is great news. Especially for the Greenway Trail and the Bluff Trail.

Not sure where in Tigard they would come from. I took Hall to 99W all the way in to Naito Parkway, then over the Steel Bridge through Rose Qtr, down Interstate and cut down to Greely all the way to Going. Not particularly safe, but I got used to it. Pretty much close to reverse the way home, although coming through downtown I cut over to 5th via Jefferson so I could eventually get back on Barbur by the Y.

Whoa, from the looks of it, we might see a contra-flow bikeway on Vancouver for this stretch? Very cool!

Swan Island TMA showing us all how it gets done. Nice work!

One of the very, very few reasons I’ve ever had to use a ZipCar was to go get a package from UPS on Swan Island, even though I live only a short distance away. It’s just too terrifying for me to bike down there. This improvement is very promising.

Way to go, Lenny! And when Waud Bluff ( finally!) gets going next year, there will be fewer reasons to feel like you HAVE to drive down onto the island. And less reason to get caught in the gridlock at shift change. Along with NoTruck.. Cement Road! all the way from Tillamook bridge to Ports of Call.
Step by step, little by little, its gonna happen!

This project is much needed but I’m particularly excited to see improvements planned for N Blandena. It’s the most logical extension of riding along Going and I’ve been using it for cycling for almost a decade now despite the uncontrolled intersections along it.

“Once complete, the Going to the River project will provide a seamless route on Going St. from NE 72nd Ave all the way to the Willamette River.”
I’m confused. Went to PBOT site for Bike Boulevard info, went to section titled NE Going. Hard to read map but it clearly shows route moves North to Alberta st and court at 40th and Eastward. Having ridden both Going and Alberta from 42nd to 72nd many times I prefer Going which seems to have much less auto traffic . I am curious why they are quoted as saying Going street will be used all the way to 72nd but map shows Alberta? That aside, I like the route extension to Swan Blvd. improvements.

The Swan Island TMA has been keeping freight moving on, off and around Swan Island for over ten years by creating and promoting transportation options for our 10,000 employees. Commuters alone in their vehicles in the peaks are the greatest obstacles to moving freight.
The City…PBOT, BES and Parks especially…has been a great partner in getting the necessary bicycle/pedestrian infrastructure built on Swan Island. We are looking forward to getting the green light from ODOT on “Going to the River.” And a special thanks to Alta Planning for all of their pro bono help and to PBOT’s Options Division for getting the project into the funding hopper at ODOT.

can’t wait to bomb that hill. great work lenny and sarah at sitma for moving this along.

Be sure to yield to pedestrians and up hill bike traffic!