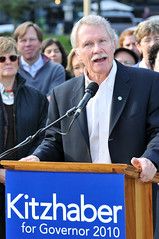 Governor Kitzhaber at his
acceptance speech back in
November.
(Photos © J. Maus)

Oregon’s newly elected Governor John Kitzhaber has made a many staff appointments in his first month in office. He’s named people to help him develop policy on issues like energy policy, business development, job creation, health care, affirmative action, and other issues. But there’s one issue where Kitzhaber has been glaringly silent — transportation.

And, while our state faces much more serious issues, there’s not shortage of action around transportation right now.

In the 2009 legislative session, former Governor Kulongoski passed the Jobs and Transportation Act that included over $800 million in earmarks for road projects across the state (some of which are already moving forward). ODOT — whose 2007-2009 budget was about $3.4 billion — received federal stimulus funding for over 200 projects — with about 100 of them completed and 40 still under construction.

Transportation infrastructure projects could be a major pillar of Kitzhaber’s jobs-creation strategy (especially if they are bike-centric), so it’s surprising that he hasn’t even mentioned it yet. 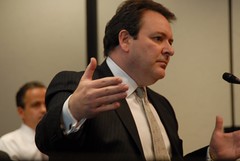 Besides appointing a staffer to oversee transportation policy, Kitzhaber could name a new Director of ODOT. The current Director is Matt Garrett, who was appointed in 2005 by Governor Kulongoski after serving as Director of Region 1 (Portland area).

So far, Kitzhaber’s office has been mum on any potential moves atop ODOT’s org chart — but that doesn’t mean people in transportation circles aren’t wondering about it. 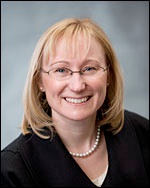 One name that has come up as a possible replacement for Garrett is Clackamas County Chair Lynn Peterson. Peterson endorsed Kitzhaber in 2010, she’s a former transportation planner and current member of the influential Joint Policy Advisory Committee on Transportation (JPACT). Peterson is also a well-known supporter of transportation policy and projects that make it easier to bike, walk, and take transit.

Reached via phone today, Peterson said she’s “totally committed to Clackamas County.” That being said, if offered ODOT’s top job she said, “I would be interested.”

Other names we’d love to see in the mix are current Region 1 Director Jason Tell and Metro Councilor Rex Burkholder, both of whom are respected transportation leaders and policymakers. 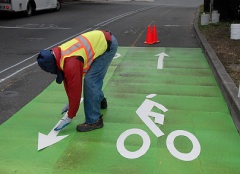 The Governor-appointed Oregon Transportation Commission (OTC) will play a role in any decision that gets made. While the Governor can appoint a new ODOT Director (subject to Senate confirmation), it’s standard practice for the OTC to recruit potential candidates and make recommendations.

“I think we have so much going on right now internally and externally that it is not a good time to bring in a new Director.”
— Gail Achterman, OTC Chair

Gail Achterman is Chair of the OTC. We asked if she thought Kitzhaber would make a move. “I urged the Governor to retain Matt Garrett as Director,” she said, “I think we have so much going on right now internally and externally that it is not a good time to bring in a new Director.”

With our state coffers looking bare and a new budget due on February 1st, Peterson says she’s not surprised Kitzhaber has been quiet on transportation. “I think it’s playing a part in his decision making… but the first thing he’s got to deal with is the budget shortfall.”

Sources say the Governor is likely to make more staff appointments in mid-February. We’ll have to wait and see if any of them are transportation related.

I hope that they appoint someone less blatently pro CRC than Rex. He is good on a lot of fronts, but dead wrong on the most expensive issue facing ODOT. I went to a bus event that he was supposed to be “moderating”. His CRC cheerleading was so bad that he was actually called out on it during the debate.

Judging by what Kitzhaber did in his first eight years as Gov., he won’t do anything at all.

Faked heart attack when state was flooded in 1996 and went fishing after 9/11 for a week when country was in crisis.