ODOT’s Sunrise Project comes with
some big-ticket bikeway infrastructure,
but it would also remove 23 acres of
wetlands, among other impacts.
(Photo: ODOT)

The Oregon Department of Transportation (ODOT) has completed the environmental impact statement (EIS) and opened up the comment period on their Sunrise Project, which is one of two phases of their Sunrise Corridor project.

The full build-out of the Sunrise Project will be a six-eight lane highway from I-205 stretching east over five miles along the Highway 212/224 corridor to the Rock Creek Junction. ODOT needs about $1.5 billion for the full build-out, but they don’t have nearly enough funding at this time. They do however, have $130 million, which allows them to get started on a package of “improvements” right away.

With a $100 million earmark from the Jobs and Transportation Act of 2009 (HB 2001, which earmarked $840 million for highway projects) and $30-60 million from other sources, ODOT is moving forward with what they call the Sunrise JTA Project.

Among the new infrastructure slated to be completed in the next few years in the Sunrise JTA Project are a host of bicycling and walking elements, including an extension of the I-205 multi-use path. But before I detail what’s in store for bikes, let’s not forget the larger picture: the Sunrise Project (not to be confused with the smaller, Sunrise JTA Project) is a major highway project that will have a huge impact on surrounding areas all in the name of congestion relief and the economy.

As pointed out by local transportation expert Chris Smith, if/when the project gets built it would be “the first new freeway built on the Oregon side of the Portland metro area since I-205 was completed back in the 1980s.”

Back in December, ODOT spokesman Brad Wurfel told the Daily Journal of Commerce that much of the impetus for the project is to relieve congestion and satisfy the needs of some major, freight-reliant businesses — Fred Meyer, Oregon Iron Work, and others — that are based in the Clackamas Industrial Area.

While the Sunrise Project might help the Clackamas County economy, it also comes with considerable impacts. According to the EIS, 500 acres of land would be used for the highway and it would create 114 acres of new “impervious surface.” 94 acres of wildlife habitat would be removed and 23 acres of wetlands would be impacted. 214 residential properties would experience noise impacts and 53 homes and 80 businesses would have to be relocated. The EIS lists the area where the highway will be built as a “significant wildlife corridor.”

Let me be clear that the Sunrise JTA Project is a smaller-scale, “affordable package of improvements” within the larger Sunrise Project. In addition to the bicycling improvements detailed below, it includes; a new, two-lane road from the Milwaukie Expressway at I-205 east to 122nd Avenue, changes to the interchange at 82nd Drive and OR 224, “access improvements” in the Lawnfield industrial area, and so on.

Now let’s take a look at the new bicycling infrastructure that will be built as part of the Sunrise JTA Project. Here’s a detail from a map of bicycling and walking elements provided by ODOT: 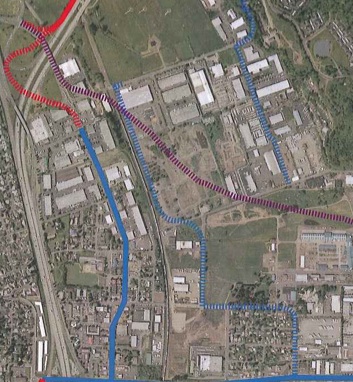 Along the two lane, “Sunrise Mainline” that will run from I-205 to 122nd Avenue, ODOT lists two miles of “shoulder bikeway” as one of the improvements. ODOT Community Affairs Manager Elizabeth Craig describes it as an “8-foot paved shoulder that can be used by bikes.”

The biggest ticket bicycling item in the places is the relocation of the I-205 multi-use path where it currently ends at SE 82nd Ave. ODOT plans to run the path along a new overcrossing of the I-205 and onto the existing bike lanes on 82nd. (Full build-out of the Sunrise Project includes a new multi-use path extending the length of the corridor.)

If all goes according to their plan, ODOT says a “substantial reduction” in motor vehicle traffic on 82nd and Clackamas Highway (224) will result in an “improved bicycle and pedestrian environment” on those streets.

While these bikeway improvements are exciting, let’s not lose sight of the bigger picture. A new report shows that Oregon isn’t on target to meet emissions reduction goals and we are still need to invest more in non-highway transportation modes. Oregon needs to develop a new paradigm for solving congestion and traffic safety issues and simply adding miles of highways isn’t the way to do it. Does this “Sunrise” signify a new dawn or is it simply another day in the life of a state transportation department that sees more and wider highways as the answer to all our problems?

For further reading, and to download documents behind these projects, see the links below:

I work near the 205/224/82nd mess and it’s really annoying for any mode… I’m very much in favor of fixing that intersection, but not so much in moving a larger volume of motor vehicles eastbound on 224…

Oh no! Not more highways to fight!! My goodness, is the CRC not enough of a bad omen for ODOT?? Transportation comes in more forms than the vehicle.

CaptainKarma
Reply to  Did I miss it? Again?

Or at least trains.

VW has a car factory in downtown Dresden to which parts are delivered via cargo tram. The whole factory is an impressive operation.

Thomas Le Ngo
Reply to  Did I miss it? Again?

See the large empty lot in the middle of the picture, where the purple ‘bike lane’ is proposed to go? Well, http://www.unitedstreetcar.com is just about finished building the only streetcar test track, in the USA, in the middle of that. The NEW road going thru there will be elevated OVER the streetcar test track. I invite anyone to come by and check it out. Bicyclists will get a nice birds eye view of the area from that elevated roadway.

KT: significant wildlife area? It’s currently part of the National Guard property, Camp Withycomb. Not much wildlife going on but there is a LOT of construction for the Armed Forces buildings going in. The area now looks nothing like the aerial map.

I would really like to see a petition for an amendment that turns the head ODOT into an elected position. Oregonians have overwhelmingly opposed new freeways yet ODOT, which is not ran by any publicly elected official, tries to shove these down our land. All in the name of progress. We need to stand up and force a change at ODOT. If someone can create the amendment, I’ll sign right now.

I second this motion!!

As much as the attribution is appreciated, you’re actually quoting my fellow Portland Transport contributor, Scotty.

this is a huge boondoggle and whatever is ultimately provided for cyclists will be an afterthought.

ODOT is not the cyclists friend.

Give me some love! Build bike lanes on Railroad Ave! Fastest way from Clackamas TC to Milwaukie to Sellwood. Give it up!

yes! International Way works, but the intersections you have to get through on it are really annoying…

Jonathan- Do you know what our neighbors to the east are doing to try to stop this? What is next in line to stop this from happening?

“It would create 114 acres of new “impervious surface.” 94 acres of wildlife habitat would be removed and 23 acres of wetlands would be impacted. 214 residential properties would experience noise impacts and 53 homes and 80 businesses would have to be relocated. The EIS lists the area where the highway will be built as a “significant wildlife corridor.”

“A new report shows that Oregon isn’t on target to meet emissions reduction goals and we are still need to invest more in non-highway transportation modes. Oregon needs to develop a new paradigm for solving congestion and traffic safety issues and simply adding miles of highways isn’t the way to do it.”

Kudos to ODOT for planning a much needed infrastructure improvement.

The shoulder of a road with 50+ mph traffic and a new overpass connector to 82nd Dr that isn’t really necessary. Sounds like they put a lot of thought about bicycles into this one… $130 would fund 1/6 of the BMP, but it’s not even 1% of the total cost for even this short highway project. Priorities…

What group is working on the anti Sunrise poster?

More freeways??? I mean, I know ODOT is really car-centric, but wouldn’t it be easier (and cheaper– $1.5 BILLION for this new freeway?) to make it safer and easier for people to make their short trips by other modes, thereby reducing VMT and getting closer to meating our emissions reduction goals?

It feels like the 8-foot wide shoulders “that bikes can use” is a sop, a bone tossed to those of us choosing 2 human-powered wheels over 4 motor-powered wheels. “Look! It’s the oldest trick in the book!”

Destroying a significant wildlife corridor and 94 acres of wildlife habitat? No thank you, sirs.

Kt – This would be to accommodate the massive development of the last 15 years in Happy Valley / Damascus, in a corridor that is already high-speed with few good alternatives. It’s not like the grid system of NE / SE Portland. I am guardedly in favor of this project, because it would draw traffic away from the other routes in the area and potentially make them safer for bicycles – though I’d rather see no increase in road lanes and a fully-separated bike facility. One result is that the improvement will likely drastically raise traffic volumes in the area.

it sounds more to me like whatever ‘congestion relief’ this provides locally will just result in more traffic on closer-in arterials like Powell and Division, as all this project is meant to do is to make it easier to drive from these far flung suburbs into downtown.

Jonathan – what does the Clackamas County Bicycle & Pedestrian Citizens Advisory Committee (BPCAC) think about the current proposal? When I used to attend the meetings regularly 2 years ago, ODOT came before the BPCAC and presented the then-current plans and asked for input. This doesn’t look like what I remember from that meeting, and I’m curious if Scott Hoelscher of ClackCo’s Transportation department or committee members like Del Scharffenburg have weighed in on the latest changes. The plan I saw had a number of fully-separated facilities and an alignment on what will become the “service drive” for the highway for local access.

While this project will have a major impact, it does have the potential to improve travel in the area, and to connect unincorporated Clackamas with planned bike/pedestrian improvements in Happy Valley, Milwaukie, and regional trail systems.

Oh, and I forgot to mention, that purple bike path, and the blue one going north along the railroad tracks, ending at Lawnfield Rd? That is RIGHT next to a Superfund toxic waste site, known as the former Northwest Pipe and Casing property. And people are concerned about a highway being put in?

Know that I am coming late to this comment thread, but I only started bike commuting along this stretch a couple years ago and am now experiencing its impact. I ride from Gresham to West Linn for work and have always wondered why ODOT didn’t run the 205 multi-use path for the entire length to I5, or at least contiguous to Oregon City. This short stretch at 82nd Dr to the 212/224 overpass where the multiuse disappears and reappears, forcing cyclists and pedestrians to jump onto busy surface streets, narrow bike lanes that are cluttered with glass, gravel and uneven surfaces, is horrible. Especially the east-, north-bound commuters who have to contend with the 82nd Dr and 212/224 intersection. Unfortunately, I think that’s the saddest part of this Sunrise project is that they didn’t complete the connection. Instead, they’ve built a new multi-use overpass over 205, which could have been an overpass for the on-ramp from Milwaulkee Expressway/82nd Dr and a ~one-mile extension of the path to 212/224. Alas.