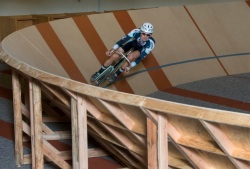 The Circulus, a 132-foot circumference wooden velodrome made as a senior thesis project by an art student in California, will get a second life thanks to a Portland-based bike company.

Artist Samuel Starr is a graduate of Pomona College who created the unique track as a senior capstone project last year. When Dan Powell, one of the founders of Portland Design Works saw a video of the track online this past summer, it left a lasting impression. When he heard it was for sale, he got in touch with Starr and the rest is history.

Here’s another photo of Circulus: 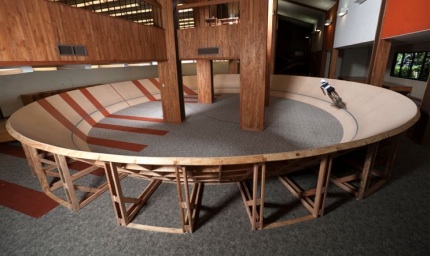 “When I saw the video that Samuel Starr posted,” Powell told us via email today, “I connected with it. I realized that Circulus was art, but totally functional at the same time… It was one of the coolest things I’d seen in a while, because it was obviously built by someone with passion. It was authentic, it was outside the box and it was unique.”

Powell has arranged to fly to Los Angeles to pick up the track, then he’ll load it into a rental truck and drive it back. When all’s said and done, he’ll have a mini-velodrome for about $3,500.

Just what exactly does he plan to do with it? “Ride it of course!” Powell says. What’s it like to ride? An article in the Los Angeles Times described Starr after a riding session:

“Whipping around the 132-foot circumference in less than five seconds a lap, he clocked about 1,600 circles, or 40 miles, one recent morning and, apart from a sore neck, seemed hardly the worse for wear.”

So far, the plan is to set up the track at the Portland Design Works Mothership (15 NE Hancock, same location as BikeCraft VI). Later this spring or summer, Powell plans to host an event with Circulus as the main attraction. “Personally, I’d love to see it under a circus big top on a summer night here in Portland. Revival style!”

Circulus from machine project on Vimeo.

I want to ride this so bad!

I’m okay with this in principle, as long as bears aren’t forced to ride it on a motorcycle.

That is an amazing creation!

YEAH!! CONGRATULATIONS DAN! Here’s to taking big chances and making big moves in 2011. Sign me up for help, support of any kind, etc…

I trust Dan will employ this track as a fresh center for straight-ahead debauchery and bedlam in the ever softening and well-behaved Pacific Northwest.

“ride it”? This is clearly the latest greatest roller derby venue.

Apparently I’m old. My first thought was how awful it would be to accidentally ride over the top.

After more thorough consideration, I want to ride it.

Don’t you mean “how awesome” it would be to ride over the top? 🙂

This is truly fantastic. I wonder if PDW needs any help setting it up when it gets here? I’m in.

just need a lot of old mattresses laying around outside the track.

Or a netting fence around the top unless you wanna go more rollerball and make it a chain link fence. At any rate it’s beautiful can’t wait to join the fun!

I need to get my Metrofiets on that thing

Men …truly aspiring to be Hamsters

The Pedalplooza possibilities are endless….

Dan! We gotta bring back the 6-Day races from the glory days of track racing!

Hey, put those bike chariots in there, throw in some lions and some seating around the circle. You’d be all set. Survival of the fittest I say. I can’t wait to give my thumbs up….or down, to the looser.

Can someone explain to me how you actually get started on a track like this with such a steep incline? Do you start in the center and get a bit of momentum before you mount the track? It seems like it would be difficult to stand on the slope in clipless shoes and start from a dead stop. My apologies in advance for being a n00b.

I believe you could actually get dizzy riding that – lol

No thats a great question! I aim to find just that out in a couple of weeks. 45 degrees is way too steep to get started on. I’m thinking a couple of loops on the ground and then you just go for it. We are certainly excited to have Circulus.

While this velo-track will be cool, I sincerly wish that the Department of Skateboarding was still in the location that PDW is in. PDX has the most vibrant scene of skateboarding and truly uniuque culture that thrived in this place. PDX has no problem being a bike town, and a million opportunities await for such projects. The biking community took a valuable part of the skating community away with this change, and it will take much more than a cirular bastard child of a velodrome to fill the energy and passion that this place once held. As a cyclist of all types and a skateboarder, I see the value in each, but will really miss what the former use of this location was. I doubt it wil ever do for cycling what the space did for skateboarding.

You should feel free to stop by and speak with us or Kyle at Cal’s about this.

Nice score! $3500 seems like a great deal – considering you can’t even get a bike made in Portland for that.

Pah! That’sa huge velodrome! In the UK, we’ve been working on miniaturisation of cycling facilities for years (just try our roads & bike lanes…), and have definitely got you beat on this. Just take a look at this itty-bitty velodrome, as ridden by Charlotte Barnes.