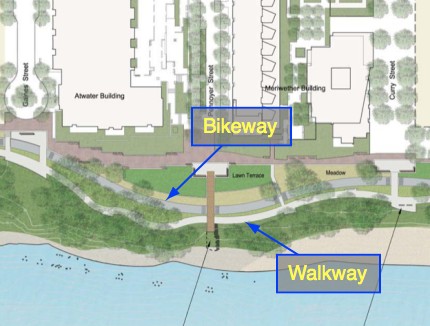 The South Waterfront Greenway Trail will feature separate paths for biking and walking.

Last week, the Portland City Council voted to approve an ordinance that authorized the City Attorney to proceed with acquiring property for the South Waterfront Greenway Trail. With that decision, the City now controls a quarter-mile stretch of Willamette riverside land between SW Gibbs and SW Lane. 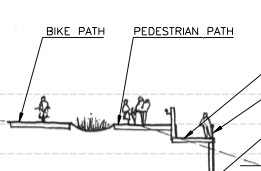 Showing the City’s progressive thinking in planning multi-use paths, the new Greenway Trail will feature complete separation of people on bicycles and on foot. According to design drawings, the bikeway will be set more inland and the walkway will be closer to the river. Both look to be about 12-15 feet wide. The new trail will run through the South Waterfront’s Central District.

Here’s a map to give you an idea of the location (Ross Island Bridge is at the top). 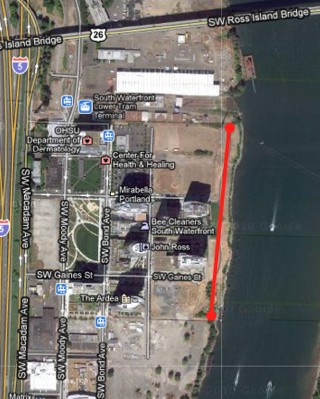 According to The Oregonian, excavation and environmental cleanup of the parcel of land is expected to cost the city between $700,000 to $1 million.

The total cost of the project is $8 million, half of which is coming from urban renewal funds, $2 to $3 million from system development charges, and $1 million from TriMet (as mitigation from the proposed Portland-Milwaukie light rail line). Developer Homer Williams — who owns the adjacent land and sold this parcel to the City through a “friendly condemnation” process for just $1 — is also expected to contribute about $200,000.

The project will also include riverbank vegetation and wildlife restoration as well as public art by Buster Simpson (same artists doing the Woodlawn bike corral). Learn more about the project on the Portland Parks and Recreation website.

At this pace, it will take forever to complete…

In any project it’s that last details that take the most time & effort.

The trail will never extended further north as it crosses the ship yard’s launching dock and never further south as long as the Spaghetti Factory exists.
I really don’t see the point.

It’s a bit more than just a bike trail for $8 million. That includes all of the environmental cleanup of that area which is heavily polluted from past industrial use. Overall, it seems like a pretty good deal. The city gets the land, cleans it up and opens it to public use. In time, it will hopefully be linked to other parts of the bike/walking infrastructure to make it more accessible.

I thought the barge fabrication plant was planning to move? Which would free up the dock and allow the trail to continue (eventually) to Riverside Place. Ditto with the southern end.

What is the cost of this project in absence of the bike and pedestrian trail?

The environmental rehabilitation of this parcel is undoubtedly part of the requirements of the original development deal for this neighborhood.
Rather than simply cleaning up the area and planting grass they want to put in trails: good.

The true cost of these trails is the difference between the cost of planning, man and materials needed to install trails vs the cost of just planting grass.

Who said it was for us cyclists and not a private exercise path for the residents of southwaterfront. Tram.

@ #5: Homer Williams is getting the best deal here. He sold the land to the city for $1, the city pays $8 mill to remediate while he only has to chip in $200K, and in the end he gets a fantastic amenity for his contiguous development for almost nothing.

Sadly, this little piece of trail will mainly only serve well serve those buying (or not buying) buying Condo’s from Homer and Friends.

And further more, this little piece of property should have been deeded and cleaned up for this purpose before, or during, the clean up done for the rest of the area.

The city should not be paying for this now.
I bet the taxes we did NOT charge these builders would nicely pay for this project.

One more thing, if Homer cruises anywhere near me again on his Segway while in the bike lane, I am gonna check him.

That trail actualley already passes on the riverside of the Spaghetti Factory.

@ Burr 9
Rage. You nailed it. Facts, commentary and all.

Jeff #4: As michael downes (#6) said, the city is planning to do a landswap with the shipbuilding facility some time in the next ten years, once they execute that, that land will be freed up for residential use and the city can (if it so chooses) send the waterfront trail further north.

IMO any additional trail building is a good thing.

Dillon has it right a path to no where or the comments about private exercise trail for South Waterfront. I will still be commuting along moody and bond with traffic. Millions wasted!

btw, since the ped path is outboard of the bike path, all those peds will be crossing the bike path twice to get there and back, probably not the best design…

BURR, calm down. All of the new waterfront developments around False Creek in Vancouver BC Canada have separated bike/ped paths, with the peds closer to the water. Works just fine IMHO.

Separate bike/ped paths were part of the greenway concept developed almost a decade ago when the City was negotiating with the landowners. Why wasn’t this connection and the obligation to complete the paths outlined in the developer agreements? The towers have been up for a while, but the extensive greenway used to sell SoWa to the public has yet to materialize.

I’m super excited for the separated paths — I love to bike and I love to walk, but I don’t love having bikes zipping past me when I’m walking. (On the other hand, I’m usually just fine zipping past pedestrians when I’m biking, so I try to keep that in mind when I’m getting freaked out by the bikes. Oh yeah, and slow down when I’m on my bike on a shared use path).

jeff
The trail will never extended further north as it crosses the ship yard’s launching dock and never further south as long as the Spaghetti Factory exists.
I really don’t see the point.

I worked next to the Spaghetti Factory for 5 years and rode my bike from Beaverton for that entire time. Spaghetti factory and the building next door (with Entercom and Clear Wireless in it) has a beautiful bike lane next to the river. The problem is the spring factory that causes the path to route around it’s building (nothing between it’s building and the river BTW). After Spaghetti Factory there is a sigh that indicates the bike lane is under construction.

Splitting hairs, i know, but the fault is with that spring company.