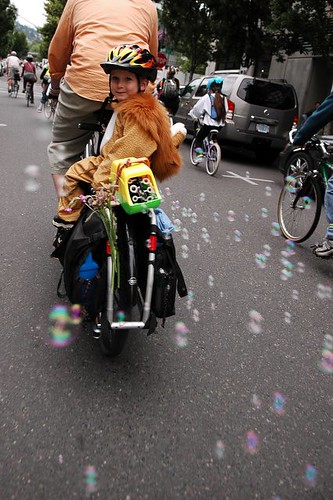 A scene from the Pedalpalooza Kickoff Parade in 2007.
(Photos © J. Maus)

Shift’s Pedalpalooza, an unprecedented display of fun on bikes like nothing that exists on the entire planet, starts Thursday. If you are anywhere near Portland (or an airport), you should seriously consider taking part.

In a nutshell; it’s 260+ rides and events packed into 17 days, it’s totally free, and it’s an ideal time to come out of your shell, meet people, and experience the streets of Portland from the seat of a bicycle. 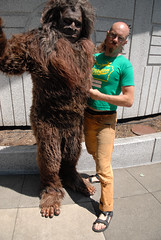 A Seski sighting? Yes. Anything
is possible on a Pedalpalooza ride.

The event holds a special place in my heart; it was the thing that first sucked me into Portland’s biking abyss. Back in June 2004, fresh-of-the-boat from California, I stumbled upon a Pedalpalooza event at a park near my house. It was the first time I’d seen freak bikes. Suffice it to say, my life was never the same. A year later, I volunteered to help out, then I started a blog… and I’ve been knee-deep in bike fun ever since.

At our recent, Shift/Pedalpalooza-themed Get Together, we had a great time reminiscing about Pedalpaloozas past. If you’d like a trip down memory lane, here are handy links to my ride reports and photos from the last five years; 2005, 2006, 2007, 2008, and 2009.

With so much going on, the calendar is a bit intimidating (see below), but with a bit of planning (and liberal use of a highlighter) you can get a handle on it. Speaking of the calendar, be sure to pick up a copy of the printed version, which will be inserted into the Portland Mercury on Thursday (that’s also their not-to-be-missed Bike Issue!).

There are many gems on the calendar (stay tuned for my Pedalpalooza Picks) but three events in particular warrant special attention: the Kickoff Ride, the World Naked Bike Ride, and the Multnomah County Bike Fair.

Here at BikePortland, we’ll keep you informed and inspired about all the great rides this month. Early each morning we’ll post a list of all the day’s rides and we’ll have ride reports, links to photos, all the latest developments on the major events and more.

Tune up your bike, pack up your panniers, and start choosing rides from the calendar. Let’s make this the biggest Pedalpalooza yet!

People who use Google Calendar can also export the Pedalpalooza to their calendar.
You can have all the events turned on, or copy individual events to your personal calendar and turn off the feed.

Thanks, Esther, for posting that. It’s odd that you have to go through Facebook to add the Pedalpalooza calendar to your own Google Calendar. I recall, in years past, being able to do it without having to use Facebook. It’s also odd that the calendar is titled “Pedalpalooza 2008,” even though it is the 2010 calendar. (Google Calendar asks “Do you want to add Pedalpalooza 2008 to your calendars?” I thought at first I’d made a mistake!)

Anyway, it’s really handy to have this in a format I already use.

I am so looking forward to the Kick-off ride – my favorite ride in the entire year!

hahah – I still can’t believe I got Seski, Oregon’s 150 Mascot on my Oregon Ride last year!

I love the kick off parade/ride — Never miss that. I also love love love Splashdance!!

EveryPP, I can’t help myself and I lead 2-3 events

Friday Jun 11 — Museums by Bike/Hidden Portland: Hollywood theme, 3pm – 7pm (for those of you with flex week schedules)

Sunday June 20 — I’m helping to promote Sven & Greta’s Silver & Gold Mobile Dance Party — This event WILL be epic — you know how those Scandis can party! Maybe you saw Sven, Greta, and friends at Sunday Parkways? http://www.flickr.com/photos/redbat/sets/72157623999583651/

@Michael M. You don’t need to go through Facebook to add to your google or other ical compatible calendar. That just happened to be the link that Esther used above.

I believe the following address will add Pedalpalooza to your calendar manually. (i.e. you need to use the add calendar by url option in google.)

haha Dan! Well for one thing I know they are both True Oregonians and predictable!

Hey, I have been thinking a lot of active transportation, changing the way we think etc. – does anybody know some hard-core drivers that they can bring to the ride?!
Let’s convert some infidels – as the guy from the NW examiner calls it!

…Shameless plug forgive me, BikePortland, but I wanted to mention that tomorrow on the CrankMyChain! live webcast we will be discussing all the great rides and showing videos from past events.

Plug your ride, send me videos, join the conversation – no user account or webcam necessary to participate.

When you pick up that Pedalpalooza calendar on Thursday, take a look at all the fun and beautiful pictures. They’re all Jonathan’s. Thanks Bikeportland for being such top notch chroniclers of our bike fun!

Accuracy, Jonathan! Accuracy! You are so much deeper than knee-deep in bike fun in Portland.

Ah, the days of yore. I remember how nervous I was at organizing an actual event myself that year (2004, Peninsula Park Pedal Picnic, I think it might be the one you stumbled upon, J?), as opposed to just volunteering on other peoples’. I sort of took it too seriously in the planning stages but it worked out fun, we gave away helmets, the clowns did their thing, and people in the neighborhood learned about bike fun.

As a person who has a hard time making decisions on what things to attend, I admit I sort of yearn for the days when the PP calendar presented less of a bewildering array, but who can argue with success? And success that is entirely the product of ordinary people doing what they enjoy and sharing it with others for no motive other than sheer fun.

Well Dan R. Miller..its a huge improvement from the days wnen your options were the Wheelment or the Bike Messenger set.
My only challenge now is to identify the ‘family friendly’ events. But I am sure to figure it out.
Schools out and my 5yo granddaughter much prefers to ride than drive.What kind of fun shall we have??

joe – I think the ones with the green time listing are family friendly. See you there 🙂

can’t wait for pedalpalooza! Heres the rides im involved with and/or leading!

Sunday13th 2pm – Splash Dance! A returning favorite. Get some sun on, have a dance party in all of portlands great fountains!

Saturday 19th 10pm – WORLD NAKED BIKE RIDE – This one is gonna be amazing. We have a great route, figured out ways to minimize or eliminate the problems from past years, and im gonna also help make a kickin after party happen!

Sazturday 19th Noon – Big Gay Bike Ride – Part of Pride weekend, should be fun, and myself a few members of the acrobalance troupe Kazum are going to be putting on some entertainment as well.

Monday 21st 5pm – Hammercise – The RIDE! You’ve heard about the new dance sensation. Everyone who joins the ride gets to learn our dance moves, then we will ride around town, and stop at populated places to put on shows and hammercise the rest of the public! Not to be missed.

Friday 25th 10:30 – North Freak Loud and Lit Ride – North Freaks monthly ride once again gets even crazier for pedalpalooza. Last year we saw 500 people and 10+ sound systems. Can we get even brighter and louder this year? Contests, Games and all night dance party.

The pedalpalooza.org calendar has a nifty “pocket reference” feature. Check out other people’s suggested ride playlists like “Naked,” “Food,” and “Old & Sober,” or create your own, either for personal use or to share. Neat neat neat!

A group bike ride from Northwest Portland to the Pedalpalooza Kickoff ride!

We will meet at the corner of NW Park and Couch Street (North Park Blocks) at 5:45 PM. The group will depart the North Park blocks at 6:00 PM.

Seeking a set of PP Calendars (40) and Posters (6) to be dropped off at Angst Gallery (1015 Main) for Vancouver distribution. (I cannot do the distribution this year.)

Anyone biking up to City Center Couv – during gallery hours that can do the drop between Noon and 5PM? (Or contact me?)

You can also see the June Bike Show at the gallery too.

Todd, The soonest I’ll be in Vancouver is probably Sunday for the Pretty Panty Ride… but I’m sure someone can get there sooner…