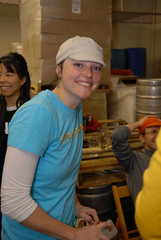 Freelance journalist, photographer and
copywriter, Heidi Swift, is one of the
entrepreneurs who will be featured.
(Photo © J. Maus)

Women who own local bike-oriented business will get a boost next month thanks to a new event that will showcase their businesses. The event will also be the first fundraiser for a new scholarship fund to support “women leaders in active transportation.”

“This all came about because we were talking about the amazing variety of things bicycle entrepreneurs in Portland are doing,” says Blue. As they made a list of local bike-oriented businesses, Blue and Thalheimer were surprised how few women were on it. “So we made another list of all the women we could think of who own bicycle related businesses.”

“We’re excited to be able to demonstrate that Portland’s bike scene is supported by the excellent work of many entrepreneurial women.”
— Elly Blue

Blue stresses that the the event is more about business than gender, but says, “We’re excited to be able to demonstrate that Portland’s bike scene is supported by the excellent work of many entrepreneurial women.”

The goal of the event is to encourage and support existing businesses and to inspire others to start one themselves. It’s also a fundraiser for a new scholarship fund Blue hopes will support up-and-coming activists who need a boost to get their world-changing ideas off the ground. The event will have a sliding scale entry fee of $10-$30 which will go into the fund.

Blue says she’s excited about the new scholarship fund because,

“It’s easy to forget about the unglamorous nuts and bolts of, say, taking a workshop on nonprofit accounting or going to a conference and networking, but those are the areas where movements are really developed.”

Blue speaks from experience. Back in June 2008, she put together the the international Towards Carfree Cities Conference which was held at Portland State University and featured an impressive roster of speakers, panel discussions, and other events.

At the event, each business owner will have stations set up to display their work and will give a short presentation about their work. More information at the event website.

Yay! And they are also awesome gals! We need to encourage more women to get into the bike biz.

Yay! I’m there. Thanks for doing this Elly and Ellee!

Rock on women! Only a few women owned bike shops in our part of the world (the southeast), and people are often surprised that we are! … we’ll participate in spirit.

Thanks for the write-up, Jonathan! We’re really looking forward to this event, and I’m especially excited to see what kind of applications for the funds come our way (though not just yet, unfortunately — the bureaucratic details for forming a fund like this are pretty major…we’ll announce when it’s ready to roll).

We are looking for volunteers and food/beverage donations for the event. And if you’re a woman who owns a bike-related business in Portland and for some reason we failed to invite you, please get in touch! eleanor dot blue at gmail.
–Elly

Sounds like a great event. Wish The Cycling Salon was included! They are the best promoters of women’s cycling that I know of.

Thanks for the idea, Emily. What is the Cycling Salon? If it’s a woman-owned, bicycle-oriented business, we’d love to talk with them about participating.

I second Emily’s comments re: the Cycling Salon! I am a local physical therapist and any time I have a client who needs bike related work ….it’s off to the gals at the Cycling Salon! Their knowledge, skill, promotion of women’s cycling and customer service is outstanding.

Coventry Cycle Works at SE 20th and Hawthorne has a newish owner who is a woman named Marilyn.

Yessindeedee…I took the reins of Coventry Cycle Works just over a year ago, when Sherman retired. Reading about this event here on Bike Portland is the first I’ve heard about it.

Marilyn, I just emailed you (I think). We’d love to have you!

Thanks to everyone who’s excited about this event!

Our presenter’s roster is now full, an all star lineup of 20 bicycle business owners with extremely diverse ventures.

We are already looking ahead to next year, though, and would love to hear from anyone who wants to be involved.

fantastic! And so cool that the list is still growing!