A popular bike route in North Portland is about to be closed until the end of December. The Vancouver Avenue bridge over the Columbia Slough has been closed to motorized traffic since the end of 2008 (due to a fire that damaged wooden supports), but biking access has been maintained. Beginning in mid-May, the bridge will be demolished and reconstructed and bike traffic will be directed to other routes.

This bridge is a popular route because it provides bike traffic a way to go north to Marine Drive, Delta Park, downtown Vancouver, and other destinations.

Paul Gornick from the Bureau of Transportation just sent along some information on the detours. He says the preferred route is to use Bryant Street to Interstate and Denver. Check out the map (PDF): 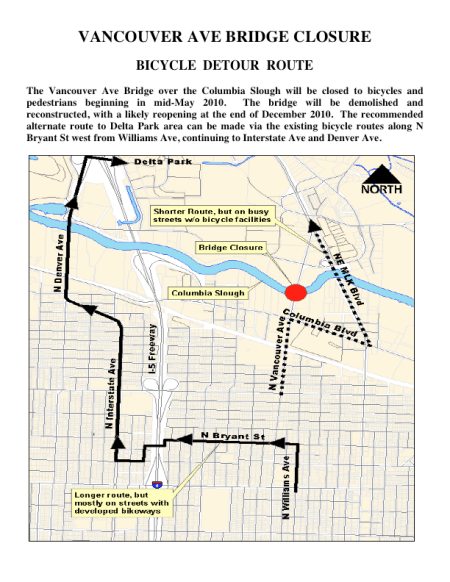 Gornick says detour maps will be posted at the bridge. Demolition work is set to begin around May 10th with completion of the project scheduled for the end of December 2010.

can’t they wait until after the summer is over? Alot of folks use this to get to delta park. I’m unhappy, who do I complain to?

Thanks for info. My beloved path.

Bummer! This makes it much more of a hassle to get to PIR for the bike racing!

I hate that short stretch of Denver Ave after passing Interstate Ave. I feels like I somehow turned onto an On-Ramp for the Highway to Hell.

This really sucks. This is part of my daily commute. Columbia and MLK are awful high volume, high speed roads with no provision for cyclists. Interstate adds more than a mile to my route.

…how about rallying your North Portland/ Vancouver readers to push for bike detour route improvements on Interstate and such! With the rerouting of bike traffic has there been a thought about how to safely add more bike traffic to this route?

SUGGESTIONS:
The ‘missing’ [or ‘removed’] segments of bike lanes along Interstate should be added ‘back’. There are some simple and low pain sections (low parking demand and HIGH traffic safety):
– the block along Denver to Fenwick
– the block along the gas station (Killingsworth to Willamette)
– etc.

And also it would be great if the route north of Denver had some deferred maintenance work done:
– fix ALL the potholes through Delta Park (not just the car sized ones)
– add sharrows on parts without bike lanes (for route continuity)
– add a lift of asphalt on the bike lane portions north of Denver near the slough where the concrete pavement is so worn and bumpy (if would also help to visually contrast the bike lane from the [truck] lane.

For anyone planning to use the detour route – I definitely recommend taking Dekum or another of the streets that runs parallel to Bryant as far as you can before crossing the interstate – Bryant is in bad shape and paved with that chunky conglomerate concrete that’s hell on a road bike.

As this is my current bike route, I would recommend just taking Bryant all the way to Denver versus cutting down Interstate after the pedestrian bridge over I-5. Once you hit Denver take it strait down to when it merges again with Interstate. This way you actually have bike lanes versus trying to bike in Interstate.

It turns out to be a great way to get to PIR and Delta park and I don’t find it too bad, beyond having to cross over one lane of traffic after you cross the slough.

Well this is going to make my ride into Portland from Vancouver much more of a hassle (as if it wasn’t enough of one already). FUN!

if you’re comfortable riding in downtown and over the I-5 bridge this shouldn’t really be much of a problem. if not? just be careful and you’ll be fine. this is actually my preffered route from vancouver into portland.

This sucks SO badly I can’t think of a decent solution to suggest in its place.

It may be that there isn’t one. For those who are not comfortable riding alongside high-speed auto traffic the Columbia MLK route won’t be fun AT ALL, and the so-called “preferred” route will be too long.

They couldn’t have done this work in the colder months? Seriously?

beth h (#12) – I have a perfectly decent suggestion. Don’t fix the bridge. It’s been out of commission for over a year – motor vehicle traffic has already adjusted, the affected businesses have already recovered or gone under, and the bridge is perfectly serviceable for bike and pedestrian use. Take the money allocated for bridge repair and fix some of the street maintenance backlog.

Not fixing the bridge is a great option. With an ever-widening maintenance backlog, we’re going to have to start making decisions about which roads and bridges to save, and which to let deteriorate naturally – why not start with Vancouver Avenue?

matt p #13- not fixing the bridge will eliminate a bike/ped crossing on a very highly used route. your assumption that the brige would remain open to other users than motor vehicles is incorrect. i talked with two survey crews on the bridge and they said the problem was that homeless guys living under the bridge have been burning the support timbers and making it unsafe. evidently it has been a lontime problem and the police do sweeps every 3-4 months to clear the camps. i saw one being yarded out about a month ago on my way into portland.

Hmm… interesting, I’ll have to take a look at it – I wasn’t aware that the bridge had wooden supports (apparently I should read Jonathan’s stories more closely). My assumption was predicated on the bridge still being sound enough to hold its own weight. Presumably that’s still true, or the city would have closed it to all users – but I don’t know enough about the current status of the bridge. Thanks for the info.

This is an enormous bummer. The whole summer and fall will be much more difficult now. The city needs to make that Interstate route suck much less. Or is there any way to carve out a decent lane along MLK until you can cut down to Schmeer? (I’m thinking of the northbound route to Vancouver from PDX).

I’m a little late responding to this but have been taking the southbound MLK/Columbia detour and will echo the laments of pretty much every other bike commuter here. It’s not at all ideal and the city has really dropped the ball on this. To completely take out the bridge during summer is hard to believe.

Anyways, the section of MLK north of Columbia is somewhat manageable because there is a bit of a shoulder, but Columbia itself is godawful. I’m going to try to cut through as many of the industrial parking lots and side streets that go west off MLK to avoid as much of Columbia as possible tonight. We’ll see how it goes…

Would people rather have the bridge be out during the cloudy, rainy, often lessened visual distance winter months that are to come or during the sunny, rather well lit, bright days of summer where visual acuity and distance are at a high? I’d prefer the sunny days to ride on a less known or less bicycle-friendly road than a wet, dark day myself. So, if the bridge needs to be out, make it quick, but do it during the summer – especially since one more mile in the sun has less of an emotional factor for me than one more in the rain.

I live in this area, and I used the bridge all the time for both cycling and walking. I feel the impact (I cycle when I go short distances south now and don’t walk it) but it isn’t that horrible. I can deal with it for a few months.

Suggestions and thoughts: Both MLK north (don’t know much of it south) and Columbia (all) are not bicycle-friendly at all. No bike lane, rough edges, holes, debris, deep set storm drains, often narrow lanes and high traffic make them both unsafe for bicycles.

If you need to ride from South to the West Delta Park area, or are in the WDP area and want to go south, use Interstate/Denver. There are two, quick/short spots that are very so-so: near the “curve” in Interstate near the last MAX stop north and when you are crossing the slough – the bridge is not marked well, there is debris in the “bike” area and the road is rough so it beats up those on road bikes with narrow tires (mtb & city bikes: you all will be good). Besides those two, small sections, it is a good route.

If you need to ride from South to the East Delta Park/Gertz/Vancouver Way/Marine Drive area, or are in those areas and want to go south, use the north-bound bike/fog lane (or the dirt/gravel, wide side area) to the foot/bike path on the bridge over the slough. Reverse is Vancouver Way to the foot/bike path up to the east side of MLK to cross the slough. DON’T try to use the west side; there is no bike lane, really no fog lane and it is full of gravel, glass and worse debris. Use the east side. Once over the slough, go slow on the dirt/light gravel. I can do it on race rims and tires without issue – when going slow. One section of thicker gravel towards Columbia but slow movement, or a small walk, makes it good.

When I move between MLK and Vancouver St via Columbia, I use the sidewalk – both ways. It is the safest method. I go slow and watch for both ped traffic and the narrow and undulating parts of the sidewalks. If there is NO traffic behind me, I may take the outside lane of the road, the WHOLE LANE, for a quick, short sprint. I say this as the road has some nasty rough spots (for bicycles) and you may need it all for safe navigation. There are two lanes both directions on this part of Columbia, so all is good.

I use these routes all the time. The MLK route leaves several things to be desired but is needed to shave off an average of approx. two miles if you go the other route and back track. Its saving graces are that it is temporary and is of short distances. I’d have preferred they cleaned up the MLK route and maybe marked it as a temp bike route but it is serviceable when taken slow.

I share this as information to those not aware of these routes. I’ve driven them in a car, on a motorcycle, on a bicycle and walked them (where applicable). I know them well.

Any clue when this bridge will ever open? Anyone?