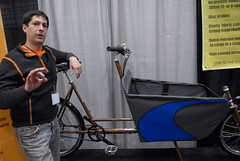 Joe Doebele, owner of Joe Bike on SE Hawthorne Blvd, debuted a new, family-oriented cargo bike at The Bicycle Show today. Dubbed the ShuttleBug, the bike is the first product from Joe Bike that is made 100% in Portland.

Doebele got his start in the Portland bike business by selling imported city and cargo bikes from China. Then he started modifying those bikes with locally sourced components. Now, with the addition of two frame builders to his staff, he’s making several new cargo bike models in Portland. The most developed of them is the ShuttleBug.

“We couldn’t find the exact bike we wanted, so we decided to do it ourselves.”

Doebele explained that the ShuttleBug has several features that set it apart from other front-loading, bakfiets-style cargo bikes. Most noticeable is the cloth “cabin.” Made from durable fabric that’s stretched over a steel tubing frame, the cabin can be taken off via two quick release levers. Also, since it’s made out of fabric (as opposed to wood), Doebele can add pockets on the inside for toys. Another nifty feature of the cabin is the see-through window at the front.

“We wanted it to have a Portland-friendly geometry…to ride to the top of Mt. Tabor and have a picnic with the family.”
— Joe Doebele, owner of Joe Bike

There’s also a canopy option that will extend up from the cabin and provide the passenger and rider with protection from the rain.

“We wanted it to have a Portland-friendly geometry,” says Doebele. He did that by making the rider’s cockpit larger to make it easier to climb hills and the angles allow for a more aggressive position (not totally upright like Dutch models). The ShuttleBug also weighs in at just 50 pounds, which Doebele says fits with his going of, “being able to ride to the top of Mt. Tabor and have a picnic with the family.”

The ShuttleBug comes with a belt-drive, disc brakes, and internally-geared Shimano Alfine drivetrain (which will soon be available in an 11-speed version). Retail price is around $3,000.

This bike looks like the most practical box bike I’ve seen so far. I can’t wait to see more of these when the time rolls around that I finally have a family.

Wow! That bike looks great! I love the changes too!

I think the bigger cockpit and lighter weight would work well here in hilly/windy Calgary.

Righteous! Way to keep Portland frame builders in business. Now I want one.