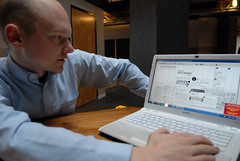 Former reporter with The Columbian newspaper, Michael Andersen, is set to launch Portland Afoot, a publication that will cover “low-car life” in Portland. Billed as “PDX’s 10-minute newsmagazine on buses, bikes and low-car life,” Andersen hopes his new endeavor will capture Portland’s growing appetite for news and information about how to live well without owning a car (or by using them less).

I sat down with Andersen earlier this week to learn more.

Andersen, 28, had covered the city government beat at The Columbian for 3.5 years before deciding to jump ship and start something new. No stranger to the upheaval in the news business, Andersen told me “the only way we’ll sustain journalism is by doing experiments like this.”

The distribution plan for Portland Afoot is good old-fashioned U.S. Mail. People can sign up at PortlandAfoot.org or find Andersen’s table at local events. He’ll also have a companion wiki that will feature entries on the people, agencies, and issues behind the stories.

“There’s a feeling of helplessness when you get on a bus. You know the driver, but they have no power… I’ve been describing it as the Consumer Reports of TriMet.”
— Michael Andersen, editor and publisher of Portland Afoot

Subscription to Portland Afoot will be about $10 per year and the magazine — a tri-folded, 11 x 17-inch paper — will ship once a month. Andersen says his target audience are the 75,000 Portland households that have either no car or few cars than workers (according to the U.S. Census). “It’s about a third of the city’s households, and it almost certainly includes most of TriMet’s 34,000 or so commuters.”

As for coverage, Andersen plans to focus Afoot primarily on transit use and TriMet in general. Andersen feels TriMet lacks accountability and that many people want to have a larger voice in their transit service:

“There’s a feeling of helplessness when you get on a bus. You know the driver, but they have no power. A lot of people say they don’t know how to act, who to blame, or what to do about big issues like service cuts… I’ve been describing it as the Consumer Reports of TriMet.”

Andersen will also cover biking and walking issues, especially how they interact with transit use. Each issue will have one feature story with original reporting and there will be a host of other sections including a news blotter and lighter stories. One example he shared was a story about five couples who met on the bus. He’ll also break daily news and share links on his @mikeonfoot twitter feed.

Andersen is sharp; a real professional. His heart is also into the activism that is unavoidable when dealing with these issues (although he says he’s approaching this as a journalist first). One thing is certain, the timing for this is good. It was about a year ago that I published a story titled, Portland is primed for a low-car diet, and while City Council hasn’t done anything bold for carfree spaces since then, there is definitely a growing number of people who are re-considering the dominant role cars play in their lives.

Haha, I scared some relatives from eastern Washington when I met up with them via bike. They were very concerned with my safety and the feasibility of riding a bike in the drizzle. I would love to start sharing this kind of publication with them!

“Son, what will you do in an emergency?” hes asks.

Cars are pointless in Portland.

Way to go, Michael. Thanks for taking on this important work!

Love it. This is exactly what we need – more support for less cars. I wish all the best to Michael.

Since the present transportation system has grown up around cars, using them lightly is reasonable. But transit and car-sharing [including rentals], covers the long-distance gaps; biking and walking handles everything else … nice n’ multimodal.

I am occasionally seen in a car [with dark sunglasses], but I’m proud to say that I’ve been …

Thank you so much for the kind words, Jonathan, Nick, Michweek, Jakkatak, Steve, Bill. I’m obviously really psyched about this, and we’ll need all the help we can get to spread the word.

Bill, you’ve got it exactly: support for the low-car lifestyle. As Jonathan keeps proving here, a community that’s well-served by the media is a stronger community, and that’s what I want to do.

You got my support, singed up to mailing list. good luck, although lets hope you don’t need it.

Great work Michael! Congrats on getting things launched! It was great to meet you at the car-free happy hour a few weeks back. 🙂

Thanks a lot, guys. Spiffy, you’re exactly who we’re trying to serve. I’ve been low-car all my life but just re-entered the car-free world myself this year, and I’m seeing the upsides and the hassles with new eyes.

Tony, I think luck is like sugar — helps every recipe.

Looking forward to seeing the new magazine and web site, good luck on the new venture.

I know this is a really old article, but I figured I’d try with a comment.

Are any of these magazines archived anywhere? I don’t think I kept any with all my moves in recent years.