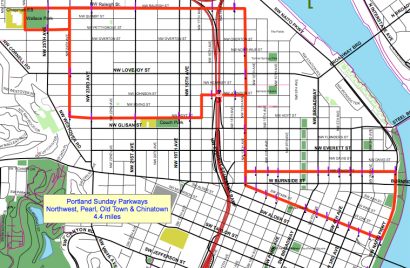 PBOT has announced the location of the fifth and final Sunday Parkways event for 2010. The September edition of the event will take place in Northwest Portland.

The 4.5 mile route will consist of two loops, connecting SW Stark Street, Old Town, the Pearl District and other Northwest neighborhoods. The route also includes a jaunt on Naito Parkway. Couch and Wallace Parks will be the site of activities, food and entertainment.

This will be the first time Sunday Parkways has been held on the west side of the river since the event’s inception in 2008.

PBOT announced the other four Sunday Parkways locations back in January, but they were holding out the September event as a mystery location. A poll taken on this website in February resulted in Southwest Portland getting the most votes — just edging out Northwest Portland.

The announcement of this fifth Sunday Parkways shows that PBOT is determined to hold all five events, despite a recommendation from the City’s budget office to save money and have only three this year. That recommendation came in response to PBOT’s request to fill that gap with the City’s General Fund. The total cost of the five events is $474,000 — $270,000 of which has been raised already through business sponsorship, grants, and other sources.

The Northwest Sunday Parkways will be held on September 26th. More on all of this year’s Sunday Parkways events (which start next month in Northeast Portland) at PortlandSundayParkways.com.

Great news! I remember reading that they were worried about having enough funds for five events. Apparently that is not an issue anymore?

I was going to say the exact same thing. The last I heard there were only sponsorship for 3/5 and were asking the city to fund the other 2. Is that still the case?

I find it interesting that this route (a little over 4 miles) is noticably shorter than the rest (6-7 miles). I can’t imagine that folks will want to do too many short loops on a bike, and this may be an event that’s better suited to walkers and skaters. Still, it’s nice to see more dates added and I hope the funding is there.

When I clicked the “announced” link which goes here: http://www.portlandonline.com/transportation/index.cfm?c=51515&a=28680) I get the following message from the Sunday Parkwas server: HTTP 404: The article “28680” does not exist or was deleted.

When is this one scheduled for?

For Jackattak (#4), and anyone else who wondered – The final Sunday Parkways of 2010 will be on September 26.

Sorry the URL for the webpage got clipped – click my screen name to go to that page (or add a “2” at the end of the URL you cited).

Good news – it’s on the westside. Bad news – it’s short, no Sunday Parkways are in SW Portland, and it may not get funded.

Woohoo! I plan on throughly enjoying all 15 mins of this ride.

Isn’t the whole point of Sunday Parkways that it is biking AND WALKING? It’s not called Sunday BIKEways… Why all the snarky comments about it being short?!?

I WOULD like to note that it is a shame that this route doesn’t take advantage of the “Festival Streets” on NW Davis and Flanders. http://bit.ly/95eFMu

Can Options Guy tell us why these streets were not used?

At the heart of the design are the two Festival Streets, on NW Davis and NW Flanders. The Festival Streets are streets without curbs, where black granite bollards delineate the boundary between sidewalk and roadway. Cars can drive and park on the festival streets, but the streets are designed so they can be temporarily closed to traffic for neighborhood events. The street surface is scored concrete bounded by light-colored granite pavers.

Costs money to close streets and ride bikes?-I feel a little thick because I really don’t get it. Something is really strange about this program, it has a web site, a budget and loads of city employee and volunteer and sponsor time; to use a public right of way for the public. Is there really someone at Portland Office of Transportation making spreadsheets about this on the clock? Someone who likes participating in these things please clue me in! (Please no jugglers, or children under 10)

incidentally, re some of these other comments, the idea is to close the space to motor traffic and let people enjoy just being on the streets. you don’t have to book through at 18 mph. you can do that any day on the same streets. take your time, breathe the air, talk with someone you had not met before. jeez.

when you said “jugglers” did you mean “juggalos?”

I can definitely understand your prejudice against children and juggalos.

“Why all the snarky comments about it being short?!?”

Maybe because, IMO, a 4 mile loop is too short.

“Costs money to close streets and ride bikes?-I feel a little thick because I really don’t get it.”

Paying overtime for that extensive armed police presence has got to be expensive.

beth h (#3) – It’s harder to get a 6 mile route in NW that stays relatively flat and doesn’t foray into the industrial area. It’s great that they’re choosing to also serve the heavily urban downtown core, which while walkable rarely has the opportunity to enjoy car-free streets in any form.

suburban (#10) – Even with volunteer labor, there are costs. Police involvement is a big one, even if the officers volunteer time, and some of the costs can’t be directly measured easily. The budget office is required to make those determinations, especially when a department is requesting money from the General Fund. In effect, PBOT making the request basically mandated that someone make a spreadsheet to determine what impact it would have and whether the budget office was behind it or not. (basically you can expect them to NOT be behind it unless it involves core infrastructure or makes money for the city)

Spare_wheel (#7 and #13) – perhaps if you weren’t training for that big race, you could enjoy it. 4 miles is fine – should take the average casual cyclist about 30 minutes to do one lap if they don’t stop. Sunday Parkways is meant to allow people to be out there leisurely and enjoy the scenery, conversation, people, events, and atmosphere. Do you really need a 6-8 mile route for that?

+1 to wishing they could have included the festival streets – what’s the point of building them if you don’t use them for…. actual festivals?

I think they are tying to do too many of these on the cheap. The SE parkway last year included an optional tabor loop. This year its a boring short root.