“More cars on more roads may not be the best way to move people more effectively.”
— Ray LaHood, US Secretary of Transportation

U.S. Department of Transportation Secretary Ray LaHood is doing more than his part to dismantle our nation’s car-centric status-quo. After his “end of favoring motorized transportation” proclamation last month, LaHood is now telling anyone who will listen that the American people have his back.

As validation of his views, LaHood is touting a new survey released by Transportation for America that shows a majority of Americans want options — other than wider roads for cars — to get around and relieve congestion. 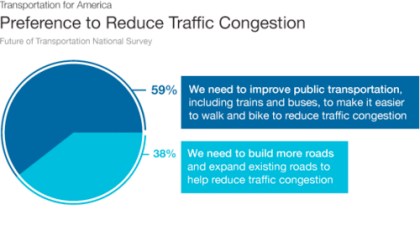 LaHood is not being shy about the survey findings. On his Fast Lane blog today, LaHood wrote:

But we do have many modes of transportation in this country, many different ways of getting around. Why not make room at the table for bicycling and walking?”

LaHood also looked to answer critics of his views by telling a New York Times blog, “This is not just Ray LaHood’s agenda, this is the American agenda; people want alternatives to the automobile.” And in a Twitter update a few hours ago, LaHood wrote, “More cars on more roads may not be the best way to move people more effectively.”

All of this rhetoric from the head of the US DOT could create the political breathing room for Congress and the Obama Adminstration to move toward slicing up the transportation pie a bit differently in months and years to come — and it could lead toward bikes getting a larger piece.

For more on the T4 America survey, watch the slide presentation below:

I like where this is heading! Somebody send Sec. LaHood a nice fruit basket for the holidays.

Way to go Ray!!! I wonder who McCain’s nominee for Sec of T would have been?

Restoring some faith in the government.
Plus, something like a 5% bike mode split is likely to show up in a nationwide reduction in maintenance costs. Once that is seen consistently, for a few years, DOTs will be only too happy to influence driversd out of their cars.

the sample was 700 landline to 100 cell. what is the actual distribution in the population? and how were the “no” answers distributed between the two sample groups? this might be even bigger news than they make it out to be.

slide nine, would be interesting to see how the smaller groups clustered in that 18 percent would distribute if they had the 72 percent slice.

The language sounds good, but is there any evidence that LaHood’s pronouncements will lead to actual policy / funding changes?

I think the slideshow presentation embeded at the end of the post summed up a lot of what I was thinking. Specifically, 67% of participants stated that the following statement was at least “totally convincing”:

“good, long-term jobs will be created and maintained.”

I’d like to see this point talked up by our Secretary of Transportation and members of Congress, especially as we seek to stimulate the economy with increased government spending.

I must say I was ambivalent about Mr. LaHood when he was appointed, he was a ho hum run of the mill (non teaparty) republican and I didn’t think much would change. Then he started saying things, and pushing things and when you watch him speak on cycling and walking, on high speed rail, you can tell he is sincere, he gets it. That is the biggest thing. His words mean a great deal to a lot of people, the money will come as soon as its able, but his help is exciting the biking and walking advocates who have been ignored for way too long at a federal policy level.

I need to send him a think you note and to keep up the good work, I have to say he is a little inspiring even!

After scouring the internet for Secretary Lahood’s email address, I gave up and sent my thank you ecard through the “contact us” section at US DOT.

Charley (#2) – Possibly Ray LaHood. Believe it or not, LaHood is Republican. liking this guy more and more every week. Happy to say I was wrong about him and thrilled to say I like the direction he’s headed!