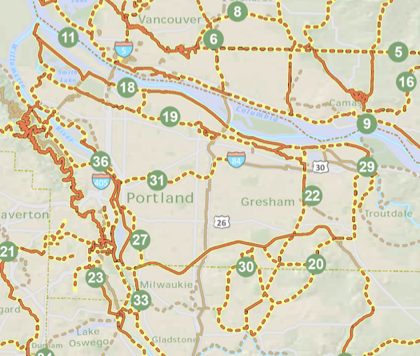 A network of 37 trails and greenways in Oregon and Washington are envisioned in the Bi-State Regional Trails System Plan that will be unveiled in Vancouver on Friday.

The plan is the product of The Intertwine Alliance, an effort launched by Metro in January of 2009 that seeks to bring together the trail-building efforts of planners, agencies, cities, and advocates across the region.

The plan includes 20 trails in the Portland metro area and 17 across the river in Clark County. Featured on the list are popular local projects like the Sullivan’s Gulch Trail and the North Willamette Greenway Trail (a.k.a. North Portland Greenway).

Why is this plan important? Here’s the word from The Intertwine:

“…the Bi-State Regional Trails System Plan was created to identify completed trail segments, coordinate efforts, and plan for and fund future trail development. Successful coordination will accelerate the completion of the trail network.”

The plan will be unveiled this Friday (4/9) at a meeting of Metro’s Quarterly Trails Forum. Learn more at TheIntertwine.org.

In other trail news, the North Portland Greenway will be the subject of the KBOO Bike Show tomorrow. You can listen live at KBOO.fm or catch the podcast from Portland Transport.

Does anybody have any questions for the KBOO show tomorrow re: npGREENWAY? Feel free to post them here and we’ll try and get to them on the air.

Its a start but as much as I enjoy green trail ways I would like to see coordinated effort to make walkable neighborhoods. Whats the point in making a nice green walk way if people drive to get there?

I keep thinking about that day when both ngGreenway and Sullivans Gulch trails meet at the Esplanade.. the Esplanade will be the Trafalgar Square of Portland.Combined with the Memorial Coliseum/Rose Quarter redevelopment, the transit already there, what kind of opportunities or transportation features,whatever.. needs to be in place to take advantage when this day arrives?

I’m concerned about toxicity in the Willamette Cove area (from the RR bridge northwest to Cathedral Park). A couple of us were exploring using a party of junior high kids to do some ivy control, but were told by Metro that it is too toxic.

So what gives? I know there is high toxicity in the river sediments, but is there also a problem on land? Will this impact the npGreenway?

EmGee (@4),
the area is adjacent to a Superfund site (41 acres) related (among other things) to creosote processed there long time ago.

While with my son some years back, we encountered EPA techs strolling along in booties with sampling gear. When asked, they advised us we might want to throw our sneakers and pants away when we got home – I questioned that as extreme but they were very serious. And this, as we stood there conversing while joggers, cyclists and little kids passed by on either side of the trail through the site. Of course, this was at the end of a day spent climbing and crawling all over the place, exploring, and we thought, “Oh, thanks.”

I do not know the current state of things there. And it’s but a small part of this overall plan described in the article. I’m all for bicycles’ right to the road (regardless of bike lanes) but if these were all indeed off-road, paved trails like the Springwater, the Esplanade & Burnt Bridge Creek, it would be a great system.

To answer #2, the point is to provide a public facility for things like running, strolling, rollerblading and cycling in a scenic environment. I think such facilities are enjoyable and well-advised, though I feel this particular plan is a little ambitious, especially when we are ever more needing to look long and hard at how public dollars are spent. To answer the call of these facilities, there is no real need to have them linked together, especially through places that are not particularly scenic. I think they will find the reality of building these connections to be difficult at best in some of the proposed locations as well. Areas that parallel existing bike routes, such as that along N Willamette (which also has ample sidewalk and unpaved running track) are basically redundant and could be easily excluded from the plan to make it more realistic. Areas that have little or no connection now, such as N Lombard from St John’s to Kelly Point Park would be well served by a MUP, and should probably be emphasized.

As for from where the funding comes to support these things? I’m not sure, but if it was “bike-specific” I think overall it would be better spent improving needed bike routes and connections than more park facilities for a leisurely ride.

I am not an expert on soils or environmental contamination. I will try and speak to this subject tomorrow on the Bike Show, but in the mean time take a look at the report referenced here:
Portland Parks Trails Update

If you click on the link to the Willamette Cove Trail Alignment Report you will find a bit of information about contamination in the cove. See page 3 of the pdf.

PS. I would love to see in future versions of this map (or plan)…some detail as to desired long term regional crossing connections (bridges, seasona; bike ferries, etc.) since this regional network does not connect well to other counties north and west of the Columbia River.( I know that these barrier are among the most costly element of the plan to address.)

Image a summer and fall weekend bike ferry from Frenchman’s Bar park to pumpkin picking or cyclecross racing at Sauvie Island – vs. a 15+ out of direction bike trip with kids through north Portland. (Perhaps this second link to Sauvie island could be proposed as a ‘civil defense’ emergency route off of the island…since it only has one bridge on off of it? Just some crazy planner thoughts here.)

Here is a link to the State of Oregon’s Department of Environmental Quality Portland Harbor Cleanup Sites.

This looks interesting– connectivity of our communities is important, and if completed, this plan will make it easier to get from, say, West Linn to Tualatin, or Lake Oswego to West Linn… Sweet.

Trail #26 – Path to the Pacific: Good luck with that one, that’s along the Port of Tillamook Bay ROW (Right-of-way). Great idea, but there are ROW acquisition issues, potential DEIS issues, and the little matter of it being a highly slide-prone region. The rail line was active until 2 years ago when a slide wiped out a major river crossing, which would cost over $64M to replace. Any use of that ROW for a trail needs to take that into consideration.

Also, interesting that they capped the “Bi-State” boundary where they did – where’s Longview’s new trail? (12.5 miles, in planning / construction right now) I spoke with the mayor pro-tem of Longview last night at a USFS roundtable discussion and he was promoting it – I hadn’t heard a word about it from any sources.

Awesome projects, I hope some of these get built, especially both segments of the Willamette Greenway Trail.

The McCormick Baxter Superfund site is a completed project as of about 2 years ago. This was a containment,not a total cleanup. This means contaminants are captured and contained on site, with 6′ soil cap over a membrane,with engineering along the riverbank to contain contaminants. It requires ongoing monitoring, but the EPA lists it as a completed project. I am sure there will be concerns and limitations as far as the trail alignment and future use,but I doubt strongly that there will be any risk to public safety allowed.

My question is basically, does anyone know if this ground is also contaminated? This is outside of the superfund area, but I’m wondering if people are confusing it with the superfund site. Someone at Metro has warned us off from planning any habitat improvement there, but perhaps that person is confused. (The area is not posted or fenced and has no warning signs).

The npGreenway will go through this area, so I think the question is appropriate to this forum.