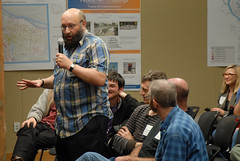 As a follow-up to my post about the importance of showing up to your local bike boulevard open house, I thought I’d share the perspective of Brighton West. Brighton is a reader who attended the open house last night for the SE 101st Avenue project where he encountered “a number of vocal bicycling opponents.”

Brighton was worried at the outset of the meeting, but things changed when one brave soul spoke up in support of biking. I asked Brighton to share more about how the meeting went:

The meeting started with one elderly resident declaring that “It didn’t matter what the neighborhood wanted, the city is just going to do what Sam Adams wants.” PBOT’s Mark Lear and Kyle Chisek handled the crowd well, not allowing a couple of vocal individuals too much influence. But the majority of the crowd was quiet and the drum beat of “don’t restrict my driving” was prevalent until one gentleman from the back of the room spoke up.

“With just this lone cyclist willing to stand up against the vocal opponents, the meeting turned a corner… The reality is that car drivers outnumber cyclists in Portland. So each meeting will have a large number of residents that don’t ride bikes.”

“We’ve heard from the people that drive cars, but let me give my perspective as a cyclist.” He continued to talk about how he took elementary students on bike field trips to the Springwater trail, and how the new plan to stripe a one block long buffered bike lane would make them much more comfortable on their bikes in the most challenging part of their ride.”

With just this lone cyclist willing to stand up against the vocal opponents, the meeting turned a corner. Two other cyclists stepped forward explain their support of the plan and a number of neighborhood residents said they were glad the city had come out to explain the project and they thought the plan was a good idea.

After the meeting I spoke with cyclist that stepped forward and I found this was the second meeting he attended. In the first meeting, the crowd was so angry about how car lanes had been replaced with bike lanes on Holgate that he was afraid to step forward. I thanked him for stepping forward to show the people in the room that cyclists are their neighbors, they are the teachers at the school, and they deserve a safe way to get from place to place. By stepping forward he opened up a space where other more moderate neighbors were comfortable showing their support for the project.

The reality is that car drivers outnumber cyclists in Portland. So each meeting will have a large number of residents that don’t ride bikes. Last night about 25 people attended the meeting. Just a few rational cyclists were able to change the outcome of the meeting. If Portland is to become a world class cycling city, now is the time for cyclists to show up at these public meetings and show support for these plans.

“I thanked him for stepping forward to show the people in the room that cyclists are their neighbors, they are the teachers at the school, and they deserve a safe way to get from place to place.”

This says it all. If we cyclists show up, speak up and let resonable automobile drivers see us as human beings with a face and a story, they will see us not as some faceless “them” and be so easily dismissed, but as part of the community with the same rights.

RMH – I agree with your sentiment, but I would choose some gentler words myself. To paraphrase your comment:

This says it all. If we cyclists show up, speak up and let resonable automobile drivers see us as human beings with a face and a story, then most community members will see that this is money well spent to create safer conditions for all road users.

Thanks for sticking up for us, Brighton! Hopefully we’ll follow in your footsteps.

thanks for sharing! I love riding to work on safe streets, I need to show up and support their development!

interesting. i am intending to attend the meeting in my neighborhood re the klickitat boulevard, and until i read this i was supposing that my main objective would be to critique the specs — how they manage the crossing at 15th, etc. had not supposed my role would be to educate hostile motorists. sounds like fun.

Kudos to those vocal cyclists in attendance.

Question, slightly off topic: where have they added bike lanes on Holgate? Does anybody know if they would ever do so west of Cesar Chavez?

From what I read here, I wouldn’t say that the motorists are “hostile”. Maybe just a little too set in their ways and wary of alternatives.

great article… and “moral to the story.”

thank you for attending and standing up for us!

“Question, slightly off topic: where have they added bike lanes on Holgate? Does anybody know if they would ever do so west of Cesar Chavez?”

it’s pretty nice, but makes it tougher to get out onto holgate… but I feel a LOT more comfortable riding it now, especially pulling the kid in the trailer…

Thanks for posting this! I didn’t even know there was going to be a meeting for the NE Klickitat area… I live really close to there, so I’ll try and hustle to that meeting after work on the 8th and add my two cents as a driver AND a cyclist.

where he encountered “a number of vocal bicycling opponents.”

What I find most troubling about this statement–and similar statements on this blog in general–is the repeated characterization of anybody who criticizes projects like this as “bicycling opponents” or “anti-bike”, or similarly caricaturized to describe a false polarization between humans.

It might make for melodramatic blog posts, but it’s not really the product of any kind of critical thinking or empathetic attempt at human understanding. The worst qualities of “opponents” that you repeatedly criticize–generalizing about groups, demonizing those groups and sometimes individuals, inventing labels, general hostility, closed-mindedness–are all generously present here on your blog and in the comments from “pro” bicyclists. It’s no different at all.

Consider this: community meetings are poor cross-sections of neighborhoods. They always have been. They’re held to fulfill preset requirement for “public involvement”, but it’s well known that the venue isn’t a place where you discuss issues in any meaningful way–it’s a place where plans already largely fnished are waved around, then “tweaked” to “reflect public response”.

And many folks know that, and choose not to attend. Folks with significant previous experience trying it. Those that do attend are mainly those with either a specific agenda, or a broad frustration.

Why no meaningful analysis of the bigger picture, Jonathan? If your goal is simply to promote bicycling at all costs, fine; but why not just say so, then?

In other words, if you believe that any obstacles to Portland becoming a “world class bicycling city” are not valid ones, regardless of what they are, you’ve got a problem with basic understanding of the bigger picture and human diversity.