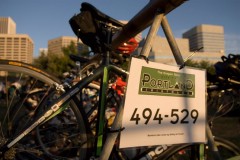 The Freshwater Trust Portland Triathlon has been named the “Greenest Race in the World” by Triathlete Magazine.

The accolade appears in the March issue. Race owner and organizer Jeff Henderson sent us over a clipping from the magazine. Here’s an excerpt:

… As it does with many things, the city takes triathlon to new levels of greenness. The finish line is made of local flowers; the race shirts are made from bamboo and moisture-wicking charcoal. Perhaps coolest of all, body marking is done by the Portland Society for Calligraphy with non-toxic markers. It’s a number you won’t want to wash off. So, if you’re down with bamboo bike racks, a naturopathic medical tent and locally sourced aid station supplies, head to Portland for the greenest race of your life.

The Portland Triathlon debuted in 2007 and it takes place on the trails, roads, and the river near downtown Portland. Henderson has turned the event into much more than just a race — it has become a model of sustainable event production that has garnered notice from many places, including the City of Portland Office of Sustainability and the sport’s governing body, USA Triathlon.

In addition to the green features mentioned by Triathlete Magazine, the event also boasts other earth-friendly firsts — like the recycled silicone swim caps Nike gave to all participants in 2009. This year, racers will get recyclable bib numbers.

In December 2008, Henderson and a partner established The Council for Responsible Sport, a sort of LEED certification program for sporting events. Henderson also helped found RiverFest, a city-wide festival that celebrates the Willamette River.

This year’s Portland Triathlon is set for August 22nd, on the last day of RiverFest. Learn more at PortlandTri.com.

I did the sprint tri last year and I’m hoping to do the olympic tri this year. It’s a very well run and organized event with excellent goodie bags for participants. The shirts are awesome!

Maybe the award is alluding to the color of the Willamette River in the vicinity of the race course in late summer every year due to algae blooms courtesy of Ross Island Sand & Gravel.

Are the tri-heads still loadin’ up their rides and driving air-polluting, parkin’ space hoggin’ monstrosities of glass, metal, and rubber to the start line? Naaaaaaaaaaaaah. NOT a chance. NOT in a million years.

It’s a start. And this “tri-head” carpooled, thanks.

Correct me if I’m wrong but didn’t the swim get canceled or delayed the last couple years due to the nastiness of the Willamette?

We swam last year and the water seemed fine, in fact clearer than Blue Lake or Hagg Lake.

I think they had to at least postpone the swim portion back in 2008 because the City had mistakenly released sewage into the river at a non-scheduled time. Not 100% sure.

I wasn’t 100% sure either. Seemed like something like that happened though. Just seemed really ironic to me.

Great job Jeff!
I know you’ve worked hard at this. You’ve implemented some great changes and other events should follow your lead.

@ Paul Tay #3,
Maybe you can help out on race day with getting folks to the event by transit or tracking where there are changes that can still be made. Pitch in, don’t just b*tch.