Guest Editorial from the BTA: Together, we can get this thing built

[Publisher’s note: This op-ed was written the staff and board of directors of the Bicycle Transportation Alliance to kick off their new “Build It” campaign that was launched this morning in downtown Portland (stay tuned for more coverage).] 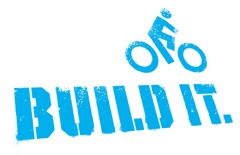 For years the momentum has been growing.  There have been more bikes  on the road, more representation at city hall and in Salem.  And from  all walks of life, there has been a growing movement of cyclists.   Or more specifically, people who ride bikes.   For the last two years, the City of Portland has been crafting their  Bike Master Plan, which would point the way to increased facilities  and funding for cycling.  We came together once as a community when  the plan itself was at risk.  But now, the plan is up for a vote, and  we are poised for a major victory in the national cycling movement.

“Today the BTA has a simple message for the leaders of our city with regards to the Bike Master Plan: Build it.”

For all the talk of world class facilities, Portland may be one of the  best in the United States, but it pales in comparison to that of European  nations. We celebrated when we achieved Platinum, but for many of us  this was just a milestone on the road to greater things.  Portland is  great, but it is far from world class.   If we were world class we would have people from 8 years old to 80  years old all feeling safe and comfortable riding wherever they wanted  to go.

If we had world class facilities, it would make more sense to  ride a bike than it would to drive a car in most cases.  If we had a  world class system of bikeways, a visitor would be able to fly into  PDX, rent a bike, jump on the MAX, and instantly feel comfortable  hitting the streets of downtown Portland.

There isn’t a single city in the United States that qualifies as world  class.  And with the 100 year dominance of the automobile, some wonder  if it can ever be done.  Well, we are at the precipice of an answer to  that question, and it comes down to a single city council vote February  4th.

Can we prove that just one American city can muster the political will  to transform itself?  Advocates for bikes and livability in Boulder,  San Francisco, Chicago, Minneapolis, and New York are watching.

We think that the answer is yes.

To date, the conversation around cycling has been built on the  assumption that building for bikes means taking away from someone  else.  But building a world class bike network doesn’t mean designing a  system with more conflict with cars or freight.  It means designing a  system with less conflict.  And with better facilities for bikes comes  safer streets for our kids, healthier citizens, and a stronger  economy. The benefits of cycling affect everyone in Portland, not just  cyclists.   Today the BTA has a simple message for the leaders of our city with regards to the Bike Master Plan:

And today we ask you to add your voice to the chorus of people advocating on  behalf of bikes, and to be frank, if there has been one time in the  BTA’s history when we needed your direct support, now is the time.  The Portland Bike Master Plan is the single best opportunity to  improve the conditions for cycling in Portland.  600 miles of new  bikeways.  Stronger bike policies.  Increased bike parking and funding  for bike facilities.

Here is what we need you to do:

Visit  portlandbikenetwork.org to join us in our campaign.  We want you  to voice your support, and we want you to help us build a coalition of  citizens supporting the plan.  Together we will get it built.

The BTA Board and Staff

When is the Rally?

K’tesh the rally is on Thursday February 4th at 1:30pm

We are watching in Tucson also!

It’s a good start, and I’m glad the BTA is putting their considerable weight behind it – but it’s only a start. Better facilities are great – IF they can be built. For lasting change, we need to look at options that don’t require large amounts of spending, improve safety, and make the streets equal for all citizens. What we need is:

1. Recognition that human-powered modes are a valid form of transportation, and that the convenience of any one mode does not trump the right to access and mobility for any or all other modes.
2. A reduction in speeds across the board, to reduce conflicts, improve reaction time, and increase safety.
3. Refresher training for operators of any motorized tranportation.
4. Increased requirements, increased enforcement, and increased penalties for motorized use – dependent on vehicle weight class.
5. A prohibition on buisnesses from discriminating against those who use human-powered transport when the job does not require a motorized vehicle.

When the BTA gets behind those principles, then I’ll be convinced that they’re adhering to their mandate. Infrastructure is great when it’s necessary – but the goal is to have whole, complete streets, where all citizens respect the rights of each other and live up to the responsibilities that come with their chosen mode of transport. This makes a great interim step, but given the current funding situation, it’s debatable whether any program like this will be fully funded to completion. Our goal should be to fight for our right to be treated as equals – because until we’re recognized as such, the funding for this infrastructure will always be subject to being cut. As the 800lb. gorilla in Portland’s bike-civic interface, they should lead this charge, or step out of the way so someone else can have a seat at the table.

I second Matt’s assessment.
Infrastructure is meaningless without education and enforcement on how various modes of transport should be used. Realistically, I believe that bikes and cars can “share the road” ONLY if motor vehicles are required to go slower, especially on surface streets.

There’s plenty of money if the City prioritizes biking. The city spent $175 million a year on transportation in 2006, so getting $100 million spent on healthy transportation choices over several years is completely do-able. City surveys show that residents want a lot more money spent on biking.

While I agree with the desire to shift public attitudes, I think those follow from people having friends, family members, and neighbors who bike. And because those people who don’t bike cite safety as their first concern, but enjoy quality facilities like bike boulevards, building things is critical. Build it, and they will come. Once they come, attitudes shift and laws shift. That’s what happened in the Netherlands and in many European countries.

I wanted to stop reading at the first typo. Then I did at the second. If this is that important, why not proofread?

Matt / beth h…what about road use refresher trainer for cyclists on the road as well? From what I witness on a daily basis, there are more than a few that could use it.

bahueh (#9) – I would love to see training for cyclists, and I think we should definitely do that. But if it comes to priorities, I’d rather see the motorist education first. Motorists kill about 500 people in the state each year. While many of them are in part also due to behavior of the cyclist / pedestrian, better education and alertness by the motorist will likely be more effective. If we can afford both, though, then let’s do it, I agree completely.

This is an example of world-class double speak. Designing and building a separated bike network will unavoidably mean taking some right-of-way away from other users such as motorists, and there will continue to be conflicts at the many points of intersection between cyclists and motorists, even with a separated bike way system.

Cycle tracks are just a new name for side paths, a thoroughly disproven and unsafe bikeway design.

The campaign looks great guys, accolades all around!

What Gabriel said. The message is simple, sleek, and impactful. Nice work!

Thank you BTA for combining clear messaging with clear goals.

I certainly appreciate leadership from a strong vision. I wish you and all of us who will support you much success in this campaign and look forward to enjoying the fruits of the labor in the years to come.

Actually Burr, they’re proven to be safe and effective on busy streets, and at intersections where bikes have a separate light, and cars have a “no right turn” on red. It’s quite simple really.

This is really something that we can all rally around. Great work so far.
Let’s build it!