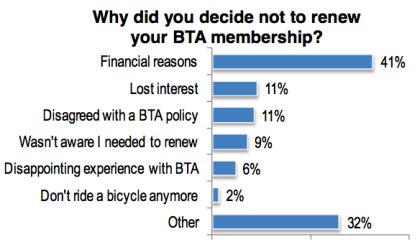 Earlier this morning, we shared results from a survey commissioned by the Bicycle Transportation Alliance to learn more about people who ride bikes in Oregon and Southwest Washington.

A major part of that survey asked questions about people’s perceptions of the BTA. It asked whether they renewed their membership (and if not, why not), it asked what type of initiatives the BTA should focus their resources on, and even what types of words folks would use to describe their “ideal version” of the BTA.

The results to those questions weren’t initially released because the BTA thought the general public wouldn’t be interested in them. That might be true, but we’re geeky enough to be curious and thought you might be too. So, we asked the BTA to share all the survey results.

Here are some of the findings:

A Profile of BTA Members

Perceptions of the BTA 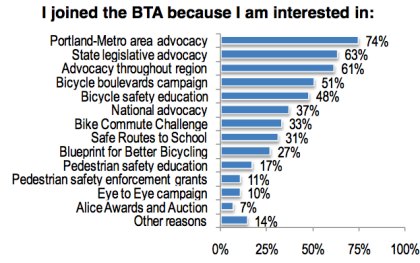 The Reasons Why People Join the BTA

What Initiatives Should the BTA Focus On?

You can download a PDF the full survey results here (analysis of questions about the BTA begin on page 15).

I would be curious to the size of members with children and how that relates to the Bike Safety education. So remember the total includes people w/o children at all and may not understand the value of Bike Safety Education.

I think that Bike Safety education is important, particularly to developing responsible, safe riders that will improve the overall image of bike riders in our community! And furthermore the BTA does a phenominal job with BSE.

You gave the reasons for not renewing, but not the #’s of those choosing to or not to renew.
I assume that cell was chosen for a reason; are that many people choosing not to renew?
Thanks.

I know why I chose not to renew: the BTA’s position on the CRC. And now that they’ve changed their position, I’m renewing (paperwork on my desk — I’ll get to it this weekend!), so I guess you can cross me off that first chart.

I renewed despite my disagreement with some of their agenda, and I marked safe routes to schools as a high priority though my children are grown.

I’m glad to see Bike Blvd’s, make a large statement in the survey. Most cities were designed around the automobile. Portland is doing a good job of retrofitting our current infrastructure to accommodate bicycles. They seem to be the most cost-effective way to accommodate safe bicycle use. Their the main routes that I use to get downtown. I hope the BTA can see that Bike Blvd’s are a good way to achieve bicycle-topia and stretch precious tax resources at the same time.

The report makes a pretty obvious point–former members tend to want the BTA to give some attention to areas outside of Portland and focus on Safe Routes to School, but since the BTA rather fails at that, that population left. The Bicycle Transportation alliance is quickly becoming the Portland Bike Alliance.

The fellow statistic and research nerds on the list can check me if I seem off base, but for “why did you not renew your membership” question (p19 in report), the second highest category was ‘other’ at 32%. Now consider the high number of ‘other’, breaking the category down would have been useful and pretty standard.

I think the BTA should continue to invest resources to Safe Routes to School cause that sets the BTA for future members as those kids grow up.
The reported income seems high, I mean, like really high. Did people inflate their incomes for the report?

At least, that’s generally the only advocating I’ve seen from them over the years, with very few exceptions.

I’m not in the City of Portland, and I’d like to see this organization actually live up to its mission statement. I have no reason to join an organization that clearly does not represent me.

I put a lot of money into BTA. I have some fancy level of membership, the name of which I don’t remember.

I will continue to support them because they are the only organization I know of which advocates for bike commuters, and that’s what I am.

However, really, I haven’t the foggiest idea what BTA does. There seems to be no focus (ads on buses one month, a snit about the new bridge the next). Nor is there any sense of where they are going. This is annoying to me, and I think sad.

An organization which does a good job of this kind of thing (off the top of my head) would be BeyondPesticides.org. Or, for that matter, 350.org. In the local advocacy department, I think Friends of Trees would serve as an example of a similarly funded, but more focused and clear-agenda’d organization.

Vote Up0Vote Down  Reply
« Flaming Lips to throw party, screening for naked, bicycling extras
Vancouver (WA) gets a buffered bike lane of their own »