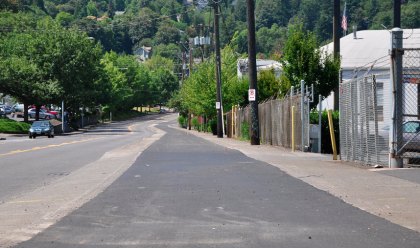 Could this freshly paved section of NW Nicolai St, where railroad tracks used to be, become a new cycle track? (Note: This paved section is on a curb, above the roadway.)
(Photo: Anonymous reader)

If you’ve ever ridden through Portland’s Northwest Industrial Area, you’ll likely recall that it’s criss-crossed with miles of train tracks. Many of the tracks are abandoned and nothing more than a symbol of a bygone industrial era. Some of them are also and a major pain for people on bikes.

“If any modifications are needed to the pavement striping plan (i.e. new bike lanes), this is probably the time to address that.”
— Alex Bejarano, PBOT

This industrial zone is home to many companies (as industry has dried up, offices have moved in) and it is also how many riders make their way north from Portland and into popular riding areas like Sauvie Island, Forest Park, and the myriad climbs leading up to Skyline Blvd.

Since many of the railroad lines are abandoned, what if they were ripped up and replaced with smooth pavement? Well, that’s just what seems to be happening to at least some of the tracks.

After a reader sent in a photo of new pavement where tracks used to be on NW Nicolai, I wondered if the new space could be used for bike traffic.

I asked around at the City of Portland Bureau of Transportation and heard (via email) from Alex Bejarano, the Development Services Manager in PBOT’s Engineering and Development office. Bejarano wrote that the Burlington Northern Santa Re Railroad (BNSF) recently removed “quite a bit” of abandoned railroad track and spur lines on NW Nicolai from NW Yeon to NW 29th (see map below).

Bejarano also shared that the contractor working for BNSF is working with PBOT traffic engineer Peter Mason to “re-establish the appropriate pavement markings at the contractor’s expense.”

Could those “appropriate pavement markings” include bike lane striping and markings?

“If any modifications are needed to the pavement striping plan (i.e. new bike lanes),” Bejarano wrote, “this is probably the time to address that.” 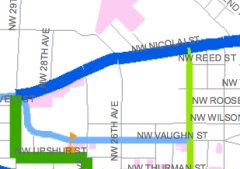 PBOT Bike Coordinator Roger Geller says that NW Nicolai has been identified as a City Bikeway since 1996. In a draft “proposed facility map” just released as part of the Bike Master Plan update, PBOT proposes that the street gets a “Separated in Roadway” bikeway treatment. According to an internal draft of the new Bike Master Plan, Separated in Roadway means PBOT wants the street to have either bike lanes or a cycle track. (It currently has neither).

Geller hasn’t looked closely at Nicolai yet, but he told me today that having new public right-of-way to work with is a “rare occurrence.” “In a general sense,” he said, “when public right-of-way becomes available to us it’s something want to take a look at and see how it might fit into the overall picture.”

Hopefully, that overall picture includes a new stretch of dedicated bikeway that will help people ride through the NW Industrial Area more comfortably.

AHA! I’ll be there early in the AM (while it’s still cool) and ride it and pretend it’s a bikeway. Call it “Appropriate pavement riding”.
Keep cool.

That looks promising. Just wait till every driveway crossing gets the sort of stop sign treatment that ruined the off-street MUP on North Marine Drive.

That’s one of the problem with MUPs. If it were a bike lane, the driveways would have to stop.

Yeah, it’s forced me to ride the bike lane out there, but it remains hard not to look at all that pristine, unused (wasted) asphalt, while dodging the holes, rocks, and various automotive and shipping detritus that collects in the bike lane.

Maybe that’s a good lesson for a new approach on NW Nicolai.

Great idea!! I love riding around there.

I hope the people looking into this can take a look at the Minneapolis bike path network. You don’t have to make it all fancy-pants to have a great urban bike-way. We don’t need designer landscaping or architecture firms designing railings/signage or public art going in along the way… just smooth paving, separation from autos, and a simple sign saying it’s a bike path. Do we even need lighting added? Too much light in the city already.
Please keep it simple. Integrate the bike-way in harmony with our industial side of town.

Ummm blackberries baked in the hot sun are fantastic, have you tried some today?
Jacque

Actually it is really better to leave the railroad in place and ride on the road. Paving over rail lines because we subsidize trucking just makes the roads more crowded. It is now almost impossibly expensive to build new rail capacity – once its gone it is gone for good…

Amen to Jacque and Matt Picio’s posts. Keep it simple and regulate traffic correctly so that this becomes a real asset for riders.

Or the city can cater to the lowest common denominator and build a facility that accomodates complete novices but doesn’t work that well for anyone with a modicum of cycling experience, and creates more new hazards than it mitigates.

Separation is a back wards step from “Sharing the Road”.

I thought we were all about that?

Plus, looking at the photo, and knowing the area, these spots that had tracks will now be filled with trucks waiting for loads, the same trucks that would be parked illegally in the meridian normally.

And the regained areas, especially the one seen in the photo, are lined with businesses and driveways, many businesses having multiple entrances.

A cycle track would not happen here,
But a properly striped bike lane is easy pleasy.

“Just wait till every driveway crossing gets the sort of stop sign treatment that ruined the off-street MUP on North Marine Drive.”

Where are you referring to? I rode out to Blue Lake Saturday and I only recall about 2-3 stop signs that weren’t located where the path crosses the roadway.

Ditto what Dabby said about the trucks loading in the area…you may get a cycle track but it will have trucks that used to get loaded/unloaded on the old railroad tracks now doing it on a cycletrack.

I know for a fact that at least two of the businesses (I used to work at one) could not do business if this “loading” zone were taken away. Legal or illegal, right or wrong, two businesses would be shuttered without the old railroad track loading zone.

Props to jacque for mentioning the Minneapolis lo-fi building of urban bikeways. It’s frustrating feeling like a million dollars and five years of planning seems to be the only way to get a trail built when thousands could be spent taking down a fence or two.

For instance, has anyone realized how simple it would be for the city to have trails (paved or not) along the Columibia Slough in-between PIR and NE 33rd Ave?

It’s so frustrating to know that the only thing preventing someone from using these almost pre-built dike trails is five fences (most of which were put up in the last three or four years).

BURR: They built roads for complete motoring novices and they filled up with cars, so why not build bikeways to balance the modal share?

they don’t let motorists on the roads without licenses, what’s your point? that you’d rather the city spend a small fortune to indulge your paranoia and give you segregated facilities to ride on, even though these types of facilities have been repeatedly proven to be less safe than cycling on the roads?

I ride over there almost daily. On weekdays, it’s safer to take Yeon and make a left turn across traffic than to mix it up with the trucks on Nicolai. Tracks or no tracks, that street is a bad place to be.

It’s nice to know some people know the area and know this is a bad spot for bicycling infrastructure; as opposed to, “Fresh pavement! Hey! I can ride my bike here now!”

Nicolai is filled with metal shavings from recyclers (among other things,) and despite the downturn in industrial business in the area there is still a lot of heavy vehicle traffic, which will no doubt tear up that fresh asphalt.

BURR: Can you cite proof that they’re less safe? No paranoia here. I share lanes every day, but I’ve lived in a certain European city where you’d be hard pressed to make your case to the local folks there. I want to see more people on bikes and less cars. Just telling people it’s okay to ride in the street doesn’t do shit.

as a messenger who rides in this area near-daily, i can tell you honestly that no amount of cycling infrastructure will really improve this area as long as the metal recyclers are there. truck traffic is irregular and busy, and often uses the median and the area over the tracks as a stopping area, and theres tons of metal filings and the like (as #15 nathan mentions). its nw *industrial*. that doesnt mean we should give up on it, but theres a certain essential character to the area that will make transition to a pleasant area to cycle for one and all difficult.

i also have to chime in with #6 mike – every time i see rail tracks pulled out, i think of all the rail infrastructure thats been pulled out already, and how incredibly not-forward-thinking it is to pull out more. dont merely think of the rails in terms of being a danger to cyclists – think of them as a fabulous, efficient way to move people and product that we should have remained as committed to as we were 100 years ago (except without the railroad barons, of course 🙂 ).

i hardly ever ride nicolai. its just unpleasant, tracks or no tracks (and this from someone who happily rides straight out yeon). i head out vaughn all the way to st helens, or cut across 26th from vaughn to get into nw industrial. nicolai looks like a nice straight route for a bikeway on paper, but in reality, its a potential nightmare.

yeah, Joel’s right. I work in the industrial area and ride my bike out that way a lot. there are no good options for riding out there really. St. Helens is about the best bet, but there is a lot of debris and the truck traffic is scary. Keep in mind a lot of the people driving out there aren’t from the Portland area and aren’t used to the bike traffic. a lot of the truckers come from all over the country and don’t know what to do when they see a bunch of bikes next to them. I’ve been honked at, and believe me, hearing an air horn right next to you will scare the bejeezus out of you.

I looked back over my notes for the North Willamette River Greenway, and found:

“On the west side, the route along Front Street has disappeared and been moved to Nicolai/St. Helens Rd. (The B&N is vacating the tracks along Nicolai, which will provide room to put in sidewalks and bike lanes.)”

I rode this new section and it’s great. This was a treacherous piece of road and this new path is excellent.