The Forest Park Conservancy recognizes that off-road cyclists are a legitimate user group whose needs are not currently being met.
— from the introduction of White Paper on Off-Road Cycling in Forest Park

The Forest Park Conservancy (FPC), in collaboration with a range of stakeholders, has released the final version of its White Paper on Off-Road Cycling in Forest Park.

The paper (download PDF here) is an effort to take a closer look at existing conditions and issues around increased access for bikes in the 5,000+ acre urban park.

In May 2007, the FPC brought together a nine-member “Off-Road Cycling Ad Hoc Committee” to create the white paper. The move was an acknowledgment that the increased popularity of mountain biking and an uptick in user conflicts and illegal trail use in the park — coupled with an existing management plan that was last updated in 1995 — were on a collision course unless the issue was dealt with. 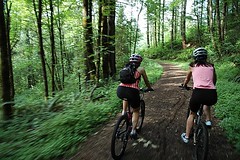 The completion of the white paper comes amid improved relations between off-road advocates, the FPC, and park’s official manager, Portland Parks and Recreation (PP&R). There is also a recently renewed sense of urgency in the community for more off-road trails (in Forest Park and elsewhere) that has been echoed by City of Portland Parks Commissioner Nick Fish.

Tom Archer, member of the committee and director of advocacy for the mountain bike advocacy group Northwest Trail Alliance, called the white paper a “starting point” and said that relationships cemented during the two-year effort to finish it are already paying off. “The process of creating this white paper has definitely helped move this issue along… It’s allowed us to develop some key relationships and talk about issues not just in Forest Park but throughout the city.”

“We wanted to make sure if we add new users, we’ll be doing more with more, not more with less.”
— Jim Labbe, Portland Audubon Society

Archer likened the white paper to an important piece of a larger puzzle that helped all sides “find common ground.”

Jim Labbe with the Portland Audubon Society, has had serious concerns about opening up Forest Park to new users. Labbe’s concerns were how the Parks Bureau, with declining resources, would be able to manage a spike in trail traffic; “We wanted to make sure if we add new users, we’ll be doing more with more, not more with less.”

In addition to making sure the City had a management strategy in place, Labbe told me he was concerned with the “where and how” bikes would use the park. “I thought it was a great step,” he said, “Now we have a framework to move forward within Forest Park, when we decide to do so.” (Both Archer and Labbe are also on the board of the Gateway Green project, another area where mountain bike advocates are hoping to have ample trails to ride.) 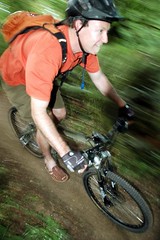 While most of the process to complete this white paper was smooth, the idea of “trail-sharing” (mixing bikes with hikers on trails where currently bikes are not allowed) drew the most disagreement. Writing on the NWTA website, Archer wrote:

The idea of trail sharing of existing singletrack trails was one of the most sensitive issues. Most of the committee felt that certain trails, most notably Wildwood, should be off limits to bikes. Myself and Mark Pickett [committee member and owner of Revolver Bikes in North Portland] argued to keep that language out (for a number of reasons).

On the committee, Archer and Pickett were in the minority in thinking that trails like Wildwood should be left open for consideration for trail sharing. According to the white paper, they felt there is “insufficient information to make a determination regarding any trail exclusions.”

Archer said the Parks Bureau made it clear to the committee that the goal of this white paper was not to develop any policy. “Some of the committee wanted to exclude some trails, but we felt that it wasn’t up to us to decide that,” he said.

In the white paper itself, it’s blatantly clear that it’s not a matter of if bikes should be allowed on trails, but where and how to implement the increased access. From the white paper’s introduction:

The Forest Park Conservancy… recognizes that off-road cyclists are a legitimate user group whose needs are not currently being met… The potential exists to provide a richer experience, on a sustainable framework of singletrack trails.

The document also makes it clear that any new trail access for bikes (whether it comes in the form of newly built trails, or on existing ones) will be done with the utmost care to “minimize impacts on wildlife and interior habitats within the park.”

There is also a strong emphasis on education to mitigate the amount of illegal trail riding that goes on. The white paper states an intention to fund and develop a new “Forest Park Ambassadors” program to patrol the park.

As for the “where” of new bike access, the white paper identifies several areas “that might be suitable… for enhancing and/or expanding off-road access.” Listed in the document are the Saltzman Rd./Power Line Area, Fire Lanes 5 and 7, the Camp Tolinda vicinity, the bottom of BPA Power Line and Newton Road and access from a new parking lot slated for NW Yeon Ave.

The white paper lists one potential area where bikes currently aren’t allowed that might be an option for a shared trail: Firelane 4 (from Leif Erikson at milepost 5.15 to the lower gate on Saltzman Road).

Portland Parks and Recreation is slated to embark on a comprehensive analysis of more bike access in Forest Park (and elsewhere). Recently, off-road advocates met with staff in Commissioner Fish’s office to discuss the issue, and in June, PP & R signed an official trail agreement with the NWTA.

In the end, it seems increased off-road riding opportunities in Forest Park are imminent, but as stated in the conclusion of the white paper, “Forest Park is an unparalleled natural resource and the bar must be set high for any expanded access.”

— Download a PDF of the 17-page, White Paper on Off-Road Cycling in Forest Park here.

This is wonderful news, my sincere thanks goes out to everyone involved in taking these steps forward. I wouldn’t have imagined a few years ago reading that the FFP (now FPC) would be stating that mountain bikers are a legitimate user group in the park, and that our needs are not being met.

One suggestion – As far as sharing the trails, I can see how it could be a sticky issue with trails like Wildwood close to town. But it would make a lot of sense to allow mixed use on the north side of the park, where there is very little foot traffic.

I’m pretty much against mixed use and I both ride and walk in the park. With 5000+ acres we should be talking about building new trail for bikes. I get the feeling we’ll probably get some trails to ride, but it’ll be a patch work from the bottom of the barrell, a little bit here and a little bit there.

I love Forest Park as both a cyclist (Leif Erickson, Saltzman Rd) and a runner (Wildwood). As a cyclist, I would like to see more trails created. However, as one of a fair number of people who run long distances on Wildwood, I know it would be very unsafe for bicycles to be on Wildwood north of the NW 53rd access point. I have had one collision and several near misses just with other runners on more remote sections of Wildwood because it is narrow, heavily vegetated, and with many blind corners. The ‘run through the jungle’ experience is why I love running there but I would hate to think of what it would be like to be keelhauled by a bicycle coming around a corner in those places. It’s a really large park; I think the best solution would be new trails for bicycles north of Saltzman Rd.

I don’t really know what to think. In the last draft there was not much on the future potential for riding in areas such as fire lane 7 and camp tolinda. Since I have been riding these areas for the last 5 years, this greatly concerned me.

At least in this version, there is acknowledgment that these areas might finally become legal under a series of conditions. There is also discussion of the power line areas. Is this the development of sections of new track or just addition to the gravel roads already in place.

In the meantime, I’ll just keep clearing the winter deadfall, maintaining the trail and riding like I have been doing for the past 5 years.

There was also not discussion of the upper water line or the trail that runs north from the water tower to German Town road. Additionally, there was still no effort to quantify the levels of recreational use but the various user groups. I find it hard to believe that such an important paper was crafted without trying to understand the various levels of traffic and potential for user conflict. All I can relate on this is anecdotal, but for all my time riding Fire Lane 7, I have never seen a horse and only hand full of people below the junction of 7 and 7A vs a ton of cyclists.

Why not just share the trails by making them one direction for bikes only one day per week. For instance Wildwood trail could be bikes only on Wednesdays. This would reduce the desire to ride it illegally while still enhancing the trails experience in Forest Park. It doesn’t seem like too much to ask for runners to not use a few of these trails 1 day a week if cyclists will stay off them the other 6.

This is all great news for us. The simple fact that we are being acknowledged as a legitimate user group was the first hurdle. Next, we need to show what we bring to the park as a user group (especially during these tough economic times). I truly believe that the more we provide the park, the more access we will have. Please consider attending the Firelane 5 work party I am leading on August 22nd. Click the link below for more details. Oh yeah, the event is being sponsored by Sellwood Cycles who will be buying beer (or your beverage of choice) for all attendees after the work party!

I know it is hard to give up part of the day on a weekend in August, but a little time now will have a big impact later. My goal is to get 30+ cyclists to attend.
Cheers!

Thank you to the people who created this paper and searched for common ground and built relationships in spite of differences.

Thank you to the FPC for keeping the focus on the park and treating all users with respect so long as they do their part to support the park.

Thank you to NW Trail Alliance work on the ground (like Brian’s Aug. 22 event) that walks the talk.

And especially thanks to Parks and to Nick Fish for creating a new success story that improves Portland and brings it together. I look forward to being an avid supporter of Nick Fish and Parks when they need our help.

How kind of the incumbent users of the Park’s resources to consider tossing a few scraps of marginal trail to the cycling community. As long as exclusive pedestrian access to the vast majority of the existing network is considered sacrosanct by the Park’s political center of gravity, creative & equitable solutions will continue to be elusive.