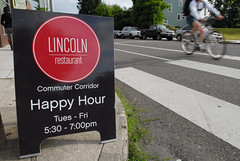 To accomodate what is probably Portland’s busiest bikeway through a commercial district (outside of downtown), the City of Portland Bureau of Transportation is set to install two more of their on-street bike corrals on N.Williams.

According to Sarah Figliozzi with PBOT, the new corrals will be on both sides of Williams at N. Failing Street. One of them will go in front of Pix Patisserie and the other will be right across the street in front of Lincoln Restaurant.

The new corrals are funded by the Portland Development Commission through their Interstate Corridor Urban Renewal Area.

N. Williams, which has seen a boom in development for several blocks near N. Failing Street, is a very busy bike traffic corridor. What makes it different than other popular commercial areas — like SE Hawthorne, N. Mississipi, SE Belmont, and NE Alberta — is that N. Williams has a bike lane (which, unfortunately, is not as wide as the one on N. Vancouver). 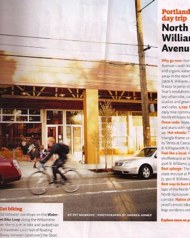 Bikes on N. Williams made an
impression on Sunset Magazine
back in January.

Restaurant owner David Welch is thrilled about the new bike parking. He told me this morning that the happy hour is an acknowledgment of the large amount of bike traffic. “We realized that, here we are, on this major artery for bike riders,” he said, “and we’re just trying to encourage folks to take a break and stop off on their ride home for a glass of wine, a beer, or something to eat.”

Figliozzi says they are putting two corrals in such close proximity because they’ve noted high demand at both locations; “We want to put the parking as close as possible to those demands.” It’s also likely the City did not want to put people in the position of having to cross the busy N. Williams Ave. just to find a bike parking space.

The new corrals will likely be installed over the weekend. Another corral is set to go up in front of Pambiche on NE Glisan at 28th. The means that by Monday, Portland will have a total of 18 on-street bike corrals with many more in the queue.

Check out a Google Map of all bike corral locations over at PDXStump.

Yes! This is fabulous news and part of a REALLY high concentration of bike corrals in a 1/4 mile area (N Mississippi, just a few blocks away, has 3!) Can we please see one on Alberta (15th by the co-op would be good) and Clinton Street now?

Now all we need is one over by Vendetta (Williams + Skidmore). Bike parking over there is hard to find on any summer night.

Dang! I got married at Lincoln last month and the bike parking situation was pretty dire! We would have loved to have two bike corrals at that intersection.

Not in my opinion. Sections of it are incredibly narrow given the amount of bike traffic in the afternoon. Vancouver has a very wide land, however.

“Comfortably wide” bike lane? You have got to be kidding me. This street is a nightmare between 4 and 6 in the evening.

That bike lane is no more than 6 feet (even less in places) wide with the parked cars tires right up to the bike lane line, and 20% of them are even over the line. You have to almost to the complete left of the bike lane to avoid getting doored.

On top of that, you have lots of cars doing 30+ mph up the street, making right turns all over the place.

And on top of that even more, you have hundreds of cyclists using that bike lane going too slow, too fast, and being too stupid.

N Williams (not N Vancouver)is a bike hazard, not a bikeway.

They either need to remove parking or remove a lane of parking before N Williams will ever be safe. I avoid the N Williams BS and take NE 8th.

Can we get a version of SE Lincoln please?

My apologies, you did not say “comfortably wide”… I must have misread. I was just get angry at this street and its supposed bike friendliness.

thanks for your input on the bike lane. I agree with you and I have edited the story.

my point was that, unlike several other commercial districts, N. Williams has a bike facility.

I agree with you that it is barely sufficient, but the fact remains that it is used by a lot of riders.

this story is about the bike parking corrals, with a side note about how this is a busy bike corridor. it’s not intended to be about the quality of the williams bikeway….although i am of course ok with whatever folks want to comment about.

i’m happy to write a separate story about the need for a better bikeway on N. Williams.. but then I could write a story like that about hundreds of streets in Portland!

Sweetness. Parking for 5th Quadrant
is a consistent problem.

Time to take Williams down to one lane for motorized traffic, same as Vancouver Avenue with an extra wide or double bike lane. Double lanes for motorized traffic invite excessive and dangerous speeds.
If Vancouver BC will replace an motorized vehicle lane with a bike lane on a bridge, Portland can do it on a one way couplet that is parallel and close to MLK, I-5 and Interstate Avenue.

More bike parking always a plus!

I agree with Lenny, one lane motorized traffic, and a double bike lane would be fantastic. Even one bike lane with some separation between bike and car would be great.

Good point. I did not mean to derail the point of the story. Anyways, two bike corrals means two less parking spots for cars to door you!

Great locations for corals! I’ve seen too many cyclists looking for parking while desserting at Pix or 5th Quadrant. It might even improve visibility on those streets as cars on the SE corner of N Williams & Failing could obscure the view of drivers coming from the east on Failing. Now they won’t have to inch out as far (and into the bike lane) to check for approaching bikes.

FWIW, the worst part of N. WIlliams is just north of Knott where an island pinches the width of both the traffic lane and the bike lane. It’s pretty disconcerting to share that space when a bus is there at the same time.

I personally feel really comfortable in the bike lanes on Williams and Vancouver. Much nicer than ones on other streets I’ve ridden (Glisan, Broadway, 26th, etc etc).

The worst part of commuting on Williams is having to leapfrog buses. The Trimet operators hate it, auto drivers hate it, and as a cyclist I tried to avoid it whenever possible, too. Get the buses off Williams! Or give them that separate lane…

I was so excited when I saw the corral painting in the street in front of Pix this morning.

And to follow up on Lillian’s post (#1):
14th and Fremont, in front of Caffe Destino, is my dream bike corral location- both for increased bike parking and making it easier to cross Fremont by bike and by foot. So much bike traffic on 14th.

I wish both corrals were going on the south side of Failing. This would improve visibility of pedestrians trying to cross a busy Williams ave (at a designated crosswalk).

I tend to think that businesses and even the bike parkers might be better served if the east-side Williams corral (not the one next to Pix) were located a little closer toward the middle of the block instead of in front of Lincoln. This is because there are other businesses in that “mall-ish” building (former Oregon Food Bank building?). I’m sure the other businesses would benefit from a closer proximity of the bike corral. Of course this is all psychological. What differece does a few feet make for parking, but it is real in terms of people’s perceptions/choices.

Personally, I like to have an eye on my bike when I am parked at the coffee shop or at EAT, the oyster bar.

On the other topic: jockeying with buses on the commute home coming up Williams can be NO FUN. Sometimes I cut over to a parallel street just to avoid the passing and re-passing of the bus. Also they are getting a bit crowded now due to their popularity.

Still I think the Williams/Vancouver bike lanes are awesome and I’m thankful to have them.

let’s also not forget that vancouver/williams is a proposed streetcar corridor. i could see it as a transit and bike only couplet one day except for it being important to access emanuel.
the car traffic really isn’t ever *that* bad, but i agree that it does feel rather choked just north of Russell.

I’ve been wanting to stop into Lincoln for their happy hour, but wasn’t sure if I was welcome in bike gear. (It seems a little too swanky for showing up in bike shoes and jersey). I’ll take the above quote to mean that I’m welcome in less than fancy clothes. I think I’ll stop in next week! (Once the corral is done)

Realized after Last Thursday last night that NE Alberta could use a bike corral or four. 🙂

John #20, I believe something like four are planned for implementation in the near future. Ask and you shall receive, apparently.

maxadders (#2): I agree with you, Vendetta is at a major bike intersection for both directions. I take Skidmore all the time when going from NoPo to NE. I often want to stop there but sometimes pass due to the lack of bike parking. Should we take up a petition or is it up to the owners?