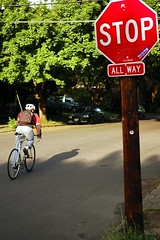 Idaho-style law fails in
Arizona. Will Oregon be any
different?
(Photos © J. Maus)

Arizona’s attempt to adopt an “Idaho-style” stop sign law for bikes has come to a complete stop. According to an article published yesterday in the Tucson Citizen, the bill — which would have changed Arizona’s stop sign law to permit bicycles to treat them as yields (a.k.a. “Idaho-style” because Idaho has had this law on their books since 1982) — failed to get out of committee.

The state rep who proposed the bill, Doug Quelland (R-Phoenix) reportedly wore his “cycling garb” in front of the committee prior to the vote. Spandex and all, his bill was voted down 5-3.

The experience in Arizona is interesting to watch because a very similar bill (HB 2690) is currently being pushed through the Oregon legislature by the Bicycle Transportation Alliance (BTA).

According to the story from Tucson, some of the reasons Rep. Quelland wants the stop sign law changed for bikes are similar to the BTA’s. Like the BTA, Quelland thinks the current law is confusing (what exactly constitutes a “complete stop”?) and he feels like the police spend too much time enforcing stop sign violations against people on bikes when there is no safety risk from their behavior.

From the Tucson Citizen article:

Quelland and Rep. Daniel Patterson, D-Tucson, complained that law is applied too harshly in the Tucson area.

“We have cities and counties, at least in southern Arizona, that are using technical stop sign violations as a moneymaker where there’s no safety issue,” Patterson said…

Quelland and Patterson said police officers in the Tucson area sometimes write $200 citations to cyclists who don’t completely stop and put both feet on the ground before proceeding through stop signs. 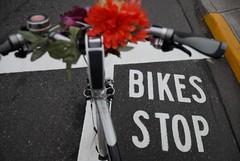 We don’t have it that bad in Portland (our police tend to only ticket people who blow through stop signs, although there is still confusion over whether or not feet need to be down (they don’t)) and the BTA has not accused the Portland Police Bureau of using stop sign citations as “moneymakers”, but I have heard them express a similar sentiment on the safety aspect (as in, why are cops doing stop sign stings at places with no significant crash history?).

As for why a majority of Arizona lawmakers opposed the bill, one of them told the Tucson Citizen,

“it would send the wrong message for children to see older bicyclists failing to stop at stop signs… I am not in a position where I want to set bad examples for kids, and I’m afraid that’s what this is doing.”

Regardless of its merit, this focus on setting a bad example for kids is likely to be a powerful argument against going Idaho-style.

Another person who voted against it said they were concerned the proposed law would, “heighten the danger when drivers at stop signs ignore bicyclists who have the right of way.”

“It seems like it muddies the situation,” Crump said. “Under existing law, at least you’ve stopped, despite the negligent driver.”

From that comment, it’s clear that Crump doesn’t understand how the new law would work. If a car is present, the person on a bike would still be required to come to a complete stop. Bjorn Warloe, a member of the BTA’s legislative committee and an ardent supporter of the Idaho-style stop law, agrees.

Warloe said Crump’s reason for opposing the bill was, “bizarre”. “If there is a car stopped at a stop sign when the cyclist is approaching the intersection with a stop sign,” he told me last night, “that cyclist would never have the right of way. Sounds like he didn’t understand the bill.”

Bjorn Warloe took it upon himself
to get an Idaho-style law passed
in 2007.

Warloe thinks Oregon’s effort to pass the Idaho-style bill stands a much better chance than Arizona’s. Here’s why:

“We have put in the time to research the pros and cons and put the arguments into writing. The BTA FAQ that I helped to write has counterpoints to all the issues brought up in Arizona and I am hopeful that we will have greater success in convincing legislators here in Oregon.

Another thing to remember is that this is Arizona’s first attempt, Oregon is giving it a third try [it passed through the House in 2003 and Warloe himself tried to push it through in 2007], meaning that we already have senators and representatives who have supported it in the past and have a better understanding going in.”

The BTA’s effort to pass an Idaho-style stop law for bikes is working its way through the legislature and is likely to get its first committee hearing later this month. Stay tuned for more coverage.

— For more information on Idaho-style stop sign laws, read this FAQ from the BTA. Also browse our past coverage at the “Idaho stop law” tag.

Just because it didn’t pass in Arizona, does not mean it won’t pass in Oregon. What needs to be done to provide higher assurance that it will pass here in Oregon? How can the public help?

The messaging of exactly what the law means needs to be very tight and easy to understand. Those against the bill are using the perceived ambiguity of the law to their advantage.

Your first photo caption has a spelling error:

It should be “then.”

One correction to our FAQ, we were unable to get language in the Bill regarding signing certain intersections as requiring a complete stop for safety reasons because no such sign exists in the Manual on Uniform Traffic Control Devices (MUTCD). The MUTCD is what’s holding up the implementation of more green Bike Boxes as well. We will work with Legislators to address this issue.

yep, the spandex was definitely a bad idea

Arizona has a long history of viewing ticket revenue as a moneymaker. When I moved there 30+ years ago for school our instructors cautioned us about the frequent speed traps at school zones. Apparently school zone fines were lucrative enough to be a budgetable item of state revenue. Family members currently living there suggest that it hasn’t changed.

Karl,
Will you promise not to wear spandex in Salem?

The lycra may have been akin to “rubbing their nose in it”. I’m sure his colleagues know he rides– he didn’t need to be that blatant. And if they didn’t know, there are better ways to get that across than dressing up in costume! (And you know what I mean– I wear lycra when the situation is appropriate.)

Still, that the bill even got as far as it did shows hope for it in the future!

Why is it too onerous of a request for our fellow cyclists to actually come to a full and complete stop at a stop sign?

I have yet to encounter a situation anywhere that the use of lycra doesn’t help significantly. Don’t be hating on the lycra 🙁

Why is it too onerous of a request for our fellow motorists to actually employ a flagman to precede him on foot at all times? It just makes common sense!

I promise not to wear spandex in Salem.

Getting the law passed in Oregon isn’t just about convincing the legislators, if the public is not sold on it, we will get a media deluge that will swamp all of the efforts on this. I hope the foundation is being laid to educate the public to prepare them for this bill.

In my experience, what this law would do is allow cyclists to make a “motorist-style” stop. Apparently, stopping is onerous for everyone.

Jaysus, talk about a critical mess. Yes, let’s definitely give the two-wheeled fascists in Origahn another excuse to act like a bunch of spoiled children and flip off those awful motorists, who should employ a flagman if they think bikees should obey the law. (What?!?!?!?) You KNOW that cyclists’ liberal interpretation of this law will lead to more accidents and definitely more confrontations with those horrible motorists, who are all bad people.

Here’s a better idea: Since we all know that cars are evil and their drivers must be even more evil, let’s make sure that the long-suffering and well-mannered non-motorists don’t have to interact with the pernicious 4-wheelers in any way–let’s enact a law that requires cyclists to shop and eat ONLY at businesses that are not serviced in any way by those awful internal combustion devices. And let’s extend that to employment. No cyclist may earn money from any form of employment that is in any way connected to cars, trucks, buses…or lawnmowers. Did you know that coffee is delivered to our fair state by…you guessed it.

Oops, wait a minute. I’ll bet that almost all bicycles ridden in PDX were delivered here by……NOOOOOOOOOO!!! Say it isn’t so… brain-spandex for all!!!

To use hyperbole: We could also ask make a law that says pedestrians have to spin in a circle once before they cross intersections.

It wouldn’t be a big deal; it’s easy enough to physically accomplish. Yet there’s no practical reason to do it so why should it be a law?

For cyclists, it’s more practical to yield at stop signs than stop at signs, so the laws should reflect that reality.

You know we could get this passed easily if we get on judges to ask why motorists aren’t required to open a door and stick out a foot when stopped. The rules are supposed to be the same for cyclists and drivers…

Good luck getting this common sense bill passed in OR.

We will bring it back next year in AZ, and will eventually get it passed.

The reasons cited indicate that the legislators were not informed. I’m sorry that better information was not available to the Arizona effort and hope that they will bring the bill back for a second hearing, likely after the passage of the bill in Oregon.

“I’m sure his colleagues know he rides– he didn’t need to be that blatant. And if they didn’t know, there are better ways to get that across than dressing up in costume!”

It was actually worse than that — his first statement was combative: (i’m paraphrasing from memory) “unlike every one of you who drives a smelly, polluting, dangerous car…”. Now, this may have been just some good-natured jabbing, like the earlier poster said I’m sure they all know each other very well, but to the outside observer it sounded unnecessarily hostile, especially to start with.