Mega-company SRAM has stepped up big to support the national bike movement with the announcement yesterday of a $400,000 grant to the Thunderhead Alliance and the League of American Bicyclists.

The grant is the fourth major award to national bike advocacy organizations since December of last year, bringing SRAM’s total donation through their SRAM Cycling Fund to $1,000,000. Other organizations that have been awarded grants include the Safe Routes to School National Partnership, Bikes Belong, and the International Mountain Bicycling Association. 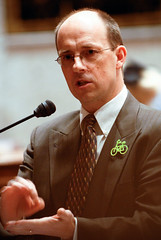 According to a statement from SRAM, during the next five years, they plan to award $10 million in grants to support “committed national advocacy efforts that enhance cycling infrastructure, safety and access.”

For America’s bike movement, the grant could not come at a better time. Here’s what League director Andy Clarke had to say about it:

“SRAM’s outstanding contribution will strengthen our ability to capture this extraordinary moment of opportunity for bicycling. We have a new President, a new Congress and a new economic reality that is encouraging people to ride. Hundreds of millions of dollars of potential federal funding for cycling is at stake – and most of that will be invested at the local level. Bicyclists must have a voice in how that money is spent”.

To be heard, that voice needs all the financial strength it can get.

excellent!
Now, when are the major bike makers going to start spec’ing SRAM’s road groups instead of Shimano or Campy???