Usually the only window into this chapter of Portland’s history are photos, letters, and policy documents. But I was recently pointed to a series of videos created in 2000 that give us a fun view into a much earlier era of bike advocacy.

The six, thirty-second videos were created by the Bicycle Transportation Alliance (now known as The Street Trust) as part of a series of public service announcements (PSAs) that ran on our local NBC affiliate television station (KGW). A reader named Etienne Scott was around when they were made. He noticed a link to the videos from one of our stories in 2011 went to a dead webpage, so he grabbed the original files and uploaded them to YouTube.

In 2000, Portland was just starting to emerge as an epicenter for cycling. The BTA had a decade of experience under their belts and they felt there was a lack of public dialogue and awareness about how car drivers and bike riders should safely interact. Their leader Karen Frost wanted to do something about that.

“What better medium than the omnipresent television?,” shared the 26-page user guide the BTA created as a companion resource for the videos. “For good or ill, the lives of Americans have been irrevocably changed by TV. The catchy music, the images of attractive people in positions of desirable and attainable status, the repetition, the repetition, the repeti …. Television sells both the good and the not so good. We want to sell something very good—bicycling!”

They spent about $500,000 (using a mix of a Federal Highway Administration Grant and local match) to create the Oregon Bicycle Awareness TV Campaign. The videos were broadcast on KGW programs from June 2000 to August 2001 and the BTA also made them available for groups in other cities to use (hence, the user guide).

And as expensive and challenging to produce as they were, the BTA says it was worth the effort. According to their evaluation, 90% of the Portland population age 18+ saw the BTA PSAs at least six times. “Net recall of the campaign was 7.0% and at the end, the net recall was 12.6%,” reads their evaluation report. “Positive changes in attitude and awareness were observed regarding driving around bike lanes, stopping at stop signs, and riding safely in the dark and rain. The number of people learning something from the campaign was 26.5% for the midcourse survey and 26.8% for the final survey; an indication that a significant portion of viewers learned from the campaign.”

Today TV PSAs have been supplanted by social media videos. And while some videos can go viral, it’s really hit or miss and most content produced by nonprofit groups isn’t that widely consumed. New forms of media are exciting and important (ask me how I know!), but long gone are the days where one partnership with one TV station could garner such strong attention from an undistracted audience.

Watch the videos below:

Yes some fun faces in there. What about Jessica Roberts’ starring role?

I can’t bear to watch it…makes me feel so old! I felt so fan-say at the time, starring in a real live TV ad…

It’s hard to believe, but Portland once had leaders who treated bicycling as an important transportation mode and cultural asset.

At one time active transportation advocacy in Portland was unapologetically political and sometimes confrontational. Who knew that civil and polite advocacy (e.g. “bike love” and “bike fun”) does little to move the Overton window?

My first “group ride” in p-town was a critical mass, where I saw cops tackle and arrest about a dozen folks at one intersection because we all couldn’t fit in the bike lane. I chose not to participate for about 10 years after that. I rode everywhere alone or with just one other person. I had been shown “what can happen” to people when they rode in large groups, and I accepted it as law. I still get freaked out when I see a cop car when I’m on a social ride. I knew we were “protest” riding, but I didn’t think we were treated fairly that day. Nobody had cameras or hand-cams to get evidence footage….so – yea, they “got away with it” as far as I know.

I remember 2000, they had all these little painted bike lanes back then, utterly useless in keeping bicyclists safe from car users…oh wait, they still have them…what the hell??

I wonder if the creators of the “Close Call” video knew that 20 years later, we’d have illegally parked trucks and SUVs on every corner in the city.

Shonn Preston
Reply to  Chris I

Or could they even envision “driver impairment” being a hundred times worse with all the new devices since then. Or side hustle drivers everywhere parking wherever. Plus more drivers overall because of population increases…quieter cars – it’s more rare I DON’T have a “close call” than it is I do. I’m not saying it was “better back in my day…” or anything, but it sure felt less, I dunno… hostile? Portland used to feel like a small town with big city dreams, but turned into a capital venture destination for the wealthy somewhere along the way instead. Stuff was cheap and folks didn’t have the same sense of self-ness that social media has insisted of us…so less “urgency” in our lives? Simpler times.

Oh yes, we were all so much younger (and faster) then. 😉

Speaking of 2000 classics:
YAKIMA: I wish someone could unearth a video on how BAD the Yakima transit bus rack was that Trimet (and other agencies) used in the 1990s before Sportsworks rack crushed them. The kids out there may not know that Trimet used to ONLY allow holders of a bike rack permit access to place a bike on the front of the bus (you had to go through supervised training since the Yakima rack was so difficult). I can remember many a wet winter evening being stuck in Portland since I forgot my Trimet bike pass in Vancouver. (CTRAN did not have the same rules…especially if you rode the CTRAN 105 down…or biked… and then tried to ride the Trimet #6 north…pre Interstate MAX.)

CCCś Bikeshare: then there was the early hippy style free bike program…who has a video of that to share for the 2000s classic film fest?

A pic of my original “Bikes on Tri-Met” card I’ve managed to keep possession of since 1998.

Anyhoo…yea, you paid $5, sat in a bike shop for a twenty minute rack tutorial, and you got a “temporary” paper one until tri-met mailed you the plastic one.

It was a process. 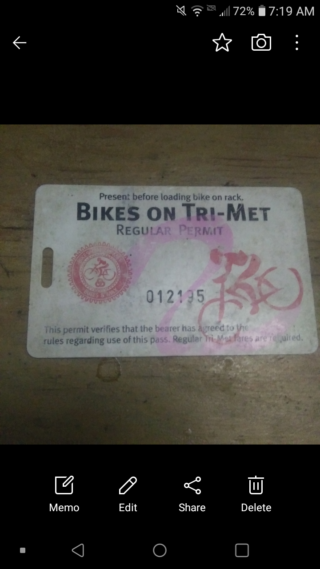 That’s so cool Shonn. Thanks for sharing! So interesting they had a process for this. What were they afraid of? And why did they end up dropping that process?

As I recall the excuses for this process were that racks only allowed certain types of bikes and that bikes were often improperly fastened causing delays.

I never bothered to get the permit and the end result is that after 23 years in PDX I have still never tranported a bike on public transportation. Ironically, I have transported a bike on transit in other cities many times because there were few or no restrictions.

The yakima racks were notoriously tricky and some bikes downtubes could be difficult to quickly adjust the mechanism for. Especially when loading during rush hour when other bus users didn’t have smart phones to look at instead of the “quirky” cyclist delaying their lives with such seeming nonsense. I assume the reason for the elaborate training; (they even had a sample rig for testing your knowledge retention and basic concept grasping after watching the video.); Was if a person didn’t lock the device down on itself (wind up lever thing) just right, a bike could very easily be ejected – probably right under the front wheels of the bus – possibly affecting the drivers ability to control the bus.

It was a challenge to be sure. But if you knew “how to” do it correctly, your bike wasn’t going anywhere once it was locked down.

And as an aside, there were only “high car” MAX’s back then that had certain rules about where you were required to stand. No cool hanging racks. Just lots of disgruntled commuters who didn’t like standing all that close to a sweaty biker and their oft times greasy steeds.

I always considered the $5 to be like cyclist penance for the extra burden placed on the other passengers. But that’s probably just my perspective.

When I moved to Portland in fall 1997, I too got my $5 bike pass (I still have mine somewhere) which I thought was a bargain as Amtrak was still charging $20 per trip for the bike plus you had to box it, take off the pedals, etc, versus TriMet’s one-time $5 fee and 10 minutes watching a video at the PSU transit office. The bus racks were at the time rather new for most of us, so I found it helpful to practice a bit without looking like a fool. The High-Floor MAX cars had a special bike clip between the first set of seats at each end – stick your front wheel in, click, then release it with your foot when you get to your station – easy to do on an empty train, not so easy on a crowded train. Or you held your bike at the back where the driver isn’t sitting, or in the center where the train articulates – lots of awkward choices really, but better than the bus. Until 1998 or 99 open smoking was still permitted in the rear of the high-floor trains, very annoying for those of us with bikes.

Pic of the back. Kinda cool…the reasons to co/commute. 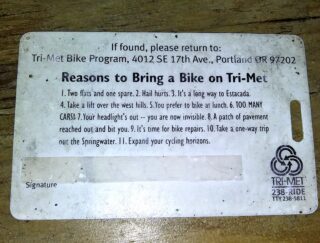 They discontinued the program somewhere around 2002-3?, I think. The new – and much simpler “over the front wheel” type bus racks eliminated any previous training. The new low car type MAX trains made every car 4-6 bike ready, whereas the high car types only allowed 2 bikes (one at each end). I guess one could argue they were spending more than they were making with the permit cards, so eliminating them as the technical user issues went away made sense in the long run. It was a one time “sales” thing (unless you needed a replacement card) – they issued the card for life. An annual re-registration would have been way too odious for the average cyclist. I only got mine because it made camping at Milo McIver so much easier.

If I remember correctly, I think the passes were considered a “best practice” by FTA at the time, along with rider training (both training nontraditional users like Soren and disabled users to actually use the transit vehicles). I’ve come across several smaller communities here in NC who still require such bike passes, as well as wheelchair passes, partly so users can prove they know what they are doing, but also to get users to “buy in” to the offered public services.

“A bit of pavement reached out and bit you”, love it.

For a while, Bike Fun re-jiggered the equation. Who NEEDS critical mass when on any given day there are 4 fun events that don’t meet police over-reaction and are FUN? Recent times have killed much of that. Political division,pandemic, the entire economic kerfuffle have supplanted bike-fun. I don’t live in a part of Portland easily accessible to bikefun so maybe my views are skewed, but it was fun while it lasted. And I look forward to the renaissance.