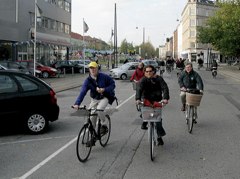 A delegation of Portlanders from Metro’s Blue Ribbon Committee for Trails recently completed a week-long exploration of bike policies, culture and infrastructure in Amsterdam and Copenhagen.

Findings and recommendations from the trip will be presented at the final meeting of the Committee (which was launched back in May) on November 10th at Metro headquarters (600 NE Grand Ave.).

Below is a sneak peek at what BTA Executive Director Scott Bricker and noted local architect (and a founding member of the Cross Crusade) Rick Potestio learned on the trip.

Scott Bricker (below are excerpts from his answers to 20 questions asked by Metro about the trip).

On the history behind how Amsterdam became so bike-oriented (emphasis mine):

“In Amsterdam we learned that voters approved a measure that offered a variety of scenarios that ranged from auto free to auto “full” cities and the voters picked a scenario that highly prioritized non-motorized modes of travel. The City and nation have since truly prioritized bicycle and non-motorized travel. However outside of city centers, auto travel continues to grow.”

“…in the 1970s citizens held a mass demonstration to protest the was automobile and consumption culture… Up to this point, bicycling had drastically dropped in the previous 15 to 20 years… Since the 1970’s bicycling has risen back to historical trends and the city continues to support and invest.”

On the pace of change here in Portland:

“Once at 15% or so (bike mode share) I think we are more at a revolutionary place…I am interested in the idea of how would a true revolution happen here.”

What are the Big Three ideas?

Rick Potestio (the quotes below are excerpts from an email he sent me about the trip).

On the importance of a connected system:

“The main lesson from Amsterdam is that we have to build the facilities, (lanes, trails, bikeways, bike parking etc…) or we will not have bike usage increase to become a dominant mode of travel. The system cannot be piecemeal, incidental and opportunistic or politically driven… it must be cohesive and fully connected.”

“We are on the right track, but many years behind.”

Rick also noted that the streets in Amsterdam were “very humane”.

“Within the historic core (of Amsterdam), cars and bikes share the street. Most are too narrow for lanes….sort of like our NW 13th Ave. (in the Pearl District). It is very humane.”

On the difference in our “urban form”:

“Our shortcoming is not so much our streets or will, but our urban form. We have wider streets than they do, so accommodating the modes is not an issue if we are smart about street design.”

In the end, Potestio thinks our political leadership must step up for bikes:

“What has to be politically driven is the promotion of bikes for the primary mode of transit, and the investment in facilities, and education. We have to have strong leadership and a will to spend on bikes. No more lip service or percent for programs. Bikes have to be the priority.”

Those are some strong words. Who’s ready for a revolution?

For more findings and recommendations on the Metro trip to Amsterdam and Copenhagen, come to the presentation on November 10th.

we will sooner see a black man elected as president of the united states than see a politician elected on a platform of seriously restricting automobile use through targeted taxation, reclamation of parking space, stricter speed and age limits, etc. in other words, any day now.

Who paid for this trip? Is this on the public dime? or is this purely personal?

from what I know, everyone on the committee was given the opportunity to partake of a grant from a private foundation.

but for the folks who went, but were not on the committee (like Rob Burchfield), they would have had to come up with the money (about $4,000 per person) themselves (that’s why I didn’t go!).

“The system cannot be piecemeal, incidental and opportunistic or politically driven… it must be cohesive and fully connected.”

You can hear more about the Blue Ribbon trip at PSU’s Transportation Seminar on Nov. 21st in a talk titled, “Portland is good, but Copenhagen and Amsterdam are AWESOME: Lessons Learned from the world’s best large cycling cities.”

I’m sorry, it will never fly until it contains solid recommendations for the police and the media to gang up on and persecute cyclists.

Clarification on the meeting time, Jonathan. The e-mail I saw from Kristin Blyler at Metro stated:

The Blue Ribbon Committee will hold its final meeting, with a reception to follow, on November 10 , 4:00-to 6:30 p.m. in the Metro Council Chambers, 600 NE Grand Ave. Please join us as the committee discusses its recommendations and next steps for accelerating development of the region’s trail system. The committee will also report back on a recent study tour of the trail and bicycling networks in Amsterdam and Copenhagen.

Should be a great meeting summing up a lot of hard work and investigation by this committee. I’m looking forward to the direction in which they send us.

Well, looks like Seoul is showing the kind of leadership that will be necessary to create truly copenhagen-quality bicycling:

“The Seoul city government plans to build 207km of cycle paths over the next four years, and will reduce the number of lanes for motor vehicles to do so.

Under the aggressive plan to fight global warming, cycle paths will extend to all corners of the South Korean capital, the officials said yesterday.

The 120 billion won (S$132 million) plan is based on a “road-diet” programme, under which the number of lanes for passenger vehicles on major roads will be cut to create new cycle paths.

It calls for the construction of 17 main cycle paths totalling 200km that criss-cross the sprawling city and one downtown 7km beltway.

“We will make sure that bicycles will compete with vehicles for commuting in Seoul,” said Mayor Oh, who rides his bicycle to work every day.

He did not outline any plan to consult motorists.”

Portland gets a mention, but we all know that even Portland isn’t willing to be this bold.

I would think if we had a more complete bicycle infrustructure in place- not just bike lanes but more seperate bike pathes…. it would be a big boost for our tourism. Imagine if you could fly into pdx, go to hertz and rent a couple of bikes, have hertz deliver your bags to a hotel and in the meantime you just ride a path right out of the airport or buss station to go have some fun…