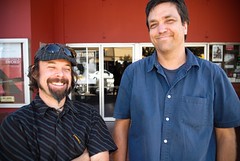 The duo spent an entire year embedded in the Portland bike scene to make the film. Last week I got a sneak peek at the “rough cut” and joined them for its first-ever showing on the big screen.

The 98-minute film gives viewers a behind-the-scenes look at the raw emotions, hard work, creativity, and silliness that defines our local bike culture. With minimal narration (that includes some commentary from bike culture pioneer and event organizer Ayleen Crotty and myself), the film expertly balances multiple storylines, allows characters to develop themselves, and succeeds in sharing a message that should resonate far beyond Portland. 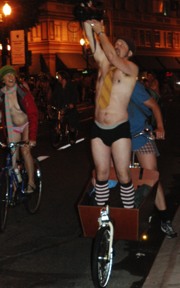 From the plight of a fledgling non-profit forced to move from basement-to-basement and the steely resolve of its founder, to the poignant realization of a Sprockette who confides that the group “Changed my life” (a tear-jerking moment), the film gives voice the diversity and depth of the Portland bike culture and also drives home a larger message.

“We feel like ‘Veer’ goes along with the concept of the life changes the characters are going through,” is how Director Greg Fredette explains the film’s title.

Instead of merely a snapshot into the interesting underbelly of Portland’s bike culture, the film succeeds because each of the storylines are given ample room to breathe. Even though I know all the characters through my work on this site for the past three years, I still learned more about them and feel like I know them even better after watching this film.

For me, the most powerful scenes were when the characters were caught in candid moments, and didn’t even seem to realize the cameras were rolling (which I learned later was a purposeful technique employed by the filmmakers). 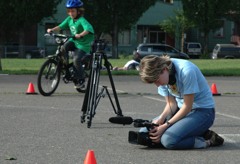 At one point, former programs manager for the Community Cycling Center, Gabe Graff, tears up as he describes a burglary and comes to grip with how the thief’s callous act would hurt the community he serves.

Another moment etched in my mind is the sight of the BTA’s former legislative lobbyist (and now executive director) Scott Bricker as he nervously awaits a vote in Salem on an important bike safety bill. Moments before the fate of the bill is decided, Bricker stands alone in a lobby in the state capitol building, his eyes darting back and forth, seemingly in search of reassurance that things would go his way. We’re given a rare glimpse of Bricker as he frets over the impending vote and worries that a few Republican lawmakers might successfully thwart his bill.

Fredette did an admirable job in balancing and weaving together the ups-and-downs in the film. For instance, a powerful musical montage of the 2007 Ride of Silence fades into a scene of a now smiling Bricker alongside Oregon Governor Kulongoski during the signing ceremony for the Vulnerable Roadway User law.

But Veer is far from being in danger of taking itself too seriously. The film doesn’t forget that perhaps the most powerful part of of Portland’s bike culture just might be its most basic and innocent element — bike fun.

Figuring prominently in the film are events from Shift’s Pedalpalooza, including scenes from a tall-bike building workshop, the Naked Bike Ride, bike jousting and other silliness at the Multnomah County Bike Fair, a long, play-by-play segment on the Zoobomb Century and lots of great footage of the Chariot Wars Death Match event at last winter’s Mini Bike Winter.

Fredette says the film was two and-a-half years in the making. He and Turner (along with a crew that numbered over 10 people at one point) edited 300 hours of footage into the current “rough cut” of 98 minutes.

From here, the two are hopeful that Veer will be selected by major film festivals this fall and winter. They’ve submitted it to the Sundance Film Festival (but Turner admits “that’s a dream”), and festivals in Berlin, New York City, and Toronto.

Like many people who come in contact with Portland’s bike culture, both Fredette and Turner say they’ve been inspired and impacted by it. “It’s definitely opened my eyes to biking,” recalled Fredette. Turner has been involved in the television business his entire life and told me that this project was, “a lot closer to my heart than anything I’ve done.”

For more on Veer, check out VeerTheMovie.com and stay tuned for updates and developments.

Can\’t wait to see it! When can we at least get a peek at a trailer?

We can\’t wait to see this after biking in Amsterdam for 2 months. Any day now Carol\’s \”Amsterdam\” bike should arrive at Mike\’s Bike Shop in Cannon Beach. Hope the streets are ready. How about a Washington County Women over 50 Bike Club? Greg, help me get it started and HEY! Congratulations on putting your heart into this. I\’m sure it\’s wonderfully creative/artistic/fascinating and fun. Way to go.

WTG, Jason and Greg! I\’m ready to watch. Do you know what film festivals you\’ll be in yet?

Telluride is the one to aim for. I used to work in it for years, and you can\’t beat the movie love, or the setting!

We are working on scheduling a couple of screenings – one in early Oct, and the other a couple weeks after that.

Thanks for your support!

Not 100% sure when we will have a trailer – but it will be soon. If you sign up for the Email Updates on http://www.veerthemovie.com we will send updates on our progress.

We just started submitting to festivals, so no news on that yet. Hoping for some good ones. Keep your fingers crossed.

One more note — The October screenings will be considered \”Work in Progress\” screenings to satisfy film festival submission requirements – so they have to be invitation only. So if you are interested in attending (and we hope lots of people are) please sign up for our email list at http://www.veerthemovie.com/emailupdates.asp so we can contact you.

Just wanted to say I really enjoyed making the film and I\’m very anxious to share it with everyone. I also wanted to thank everyone who contributed. I met so many awesome people. I miss all y\’all

hell yea! do it up right!

and dont forget, the zoobomb cutting room floor footage is ours!

good luck with the festivals.

Jeez, the media get all the perks! I have to wait until the viewing in another month!

This looks fun and inspiring. I look forward to seeing it.

Judging by the trailer it seems like it covers a relatively recent history of Portland’s Bike Culture/Movement. That’s great but I’d like to see someone do a historical documentary of Portland’s bike community that covers the longer-term planning and organizing efforts which in many ways laid a critical foundation for the rapid increases in bicycling we have seen in recent years.

Steve Johnson has assembled some of this story on his civic history website: