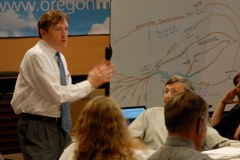 With an impressive first meeting of their Blue Ribbon Committee for Trails and a new video (watch it below) for their Connecting Green initiative, Metro’s ambitious effort to “create the best parks and trails system in the world” has hit the ground running.

Earlier this month, Metro President David Bragdon called together a diverse group of regional leaders to introduce the effort.

He inspired a packed room at Metro Headquarters with words about the importance of regional trail connectivity (using an E. M. Forster quote of “Live in frangments no more…only connect”) and a call to rally the troops (using a quote from Dwight Eisenhower, “when a small group of people come together at the right time…they can change the trajectory of the region.”)

The Sullivan’s Gulch Trail is one of the projects Connecting Green is keen on.
(Map: Metro)

Also during his opening speech, Bragdon announced that the Connecting Green effort has received funding support from The Oregon Community Foundation, Kaiser Permanente ($50,000 for a walking guide) and Providence Hospital ($5,000 for the Sullivan’s Gulch Trail, which runs adjacent to their property near I-84). 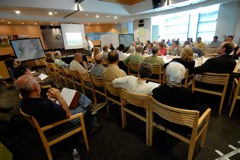 Committee Chair Dave Yaden took over after Bragdon’s opening remarks and each member of the Committee introduced themselves, shared their favorite trail, and then they discussed the direction the group will take in the future.

On display at the meeting were huge posterboards with maps and information on some of the parks and trails that will be the focus of the Connecting Green effort (here’s a list of PDFs of each of them for download).

Also announced at the meeting was a series of Connecting Green Summer Trails Tours. The five tours are guided walking and biking adventures that will put Committee members (and the public I assume) face-to-face with the region’s existing and future trails. (For details, Download a Word document here.)

Metro has also unveiled a video to introduce the Connecting Green initiative. Watch it below:

Do they drink Pabst at their Blue Ribbon committees? Hardy har har har!

I think they should call it the \”Green Ribbon\” committee. They are creating a green ribbon throughout the community. Sounds more Portland than Blue Ribbon. Unless, of course, they are drinking PBR. Then it\’s perfectly suited.

That\’s a pretty inspiring video … I can\’t wait until there are trails between where I work and live!

npGREENWAY would love to see folks come out and join the group for the North Portland Greenway Bike Ride on Wednesday, June 11th from 4:30 to 7:00 pm.

Many have not yet had the chance to experience the Willamette River shoreline from downtown Portland to St. Johns as we envision.

This ride will help us all see the vision and hopefully provide an excellent chance to share that vision with influential civic, elected and business leaders from around the region.

Lets show up in numbers!

I downloaded the pdf\’s and have been geeking out on the possibilities. Springwate to Estacada, Scouters Mountain-Mount Scott, Hillsboro to the beach… Pretty ambitious and exciting stuff.

Now this is truly exciting and worthwhile! Combined with the Gateway Green bike park idea, these are the types of infrastructure that serve the vast majority of cyclists throughout the REGION. Bravo to those thinking about bikes beyond downtown Portland!

There\’s still right of way for the old electric rail line out to Estacada. Don\’t know if it is still legally a right of way, but the old raised railbed is still intact in many places. And of course, the old trestle over Eagle Creek is still there.

That ride would sure beat riding along I-84 gagging on exhaust fumes!

This is by far the most exciting thing I\’ve heard of in a long time. I can\’t wait! This network of trails will cement us as an awesome bike region.

In answer to Spanky – yes, the right of way to Estacada still exists, and is in public ownership (the private railroad company abandoned it in the late 1980s) but it is very overgrown. The route through Deep Creek just east of Damascus is beautiful, then it emerges near Barton Park along the Clackamas. It parallels the river out to Estacada. It would be a great route leading to campsites along the river and to the Mt Hood National Forest.
David