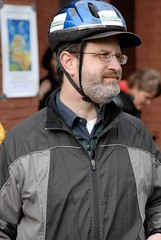 Bissonnette — who is very close to
facing a runoff with Amanda Fritz
for a seat on City Council — emerged
as a champion of bicycling and
sustainable transportation during
his campaign.
(Photo © J. Maus)

The race for City Council Seat #1 has gotten even closer as the final ballots trickle in.

Amanda Fritz is the clear winner, but with only 43% of the votes, she’ll face a runoff contest in November with the second-place vote getter (candidates need 50% plus one to win outright).

Late last night, a very close battle for that spot was taking place between Charles Lewis, John Branam, and Jeff Bissonnette. But, as ballots continued to be tallied into this morning, Bissonnette — who is clearly the most bike-friendly of the three — leap-frogged Branam and moved withing strking distance of Lewis.

I just got off the phone with Bissonnette and he said his campaign hasn’t given up — yet. “I’m still hanging in there for a little bit… but gaining 600 or so votes at this point is hard to project.”

In a nod to how his campaign and ideas shared many values with another candidate — transportation activist Chris Smith — Bissonnette said his chances in passing Lewis, “depend on how many coin flips I win with people.”

A final vote count should be known within a few hours. I’ll update this post when I know more.
_____

I\’ll keep my fingers crossed. I was one of those late people and he go my vote

Damn, came down to Bissonnette and Chris for me and I chose Chris. Wife too. While I love Chris, I wish I would have voted for Jeff.

Jon – refresh our memories about Charles Lewis in respect to bicycling, if you have that info – Because if he is the run off candidate over Jeff… On Tuesday, I saw Charles leaving his campaign headquarters by bicycle… two panniers and a helmet on his Ethos founder\’s head.

\”Jon – refresh our memories about Charles Lewis in respect to bicycling,\”

Metal Cowboy, I never said Lewis doesn\’t bike or might not be sensitive to bike-related issues… I\’m sure he would be.

I have more to learn about Lewis and I\’m sure he would make a fine commissioner.

But that being said, there\’s a big difference between simply liking and riding bikes versus understanding the role bicycles need to play in larger policy issues and urban transportation and planning contexts. … and then taking that understanding and using it to champion bike-related initiatives and making bikes a more viable option for more Portlanders.

The days of thinking someone \”gets it\” in relation to bikes simply because they ride one are over.

I definitely see this as a slight problem with the system and wish the runoff included more than two people. I, for one, was indecisive about Bissonnette and Smith, if I could do it again I\’d choose Bissonnette (knowing what I do now). If he\’s only 600 votes behind Lewis, I think he should be included in the runoff.

While I voted for Smith in this race, it should be noted that Lewis is the man behind Ethos (bringing music instruction to underprivileged children), and is an overall good guy who understands community building. I doubt seriously he would be difficult to educate about the needs of the bike community.

I voted Bissonette, hope he squeaks in over Lewis. That said, I know nothing about Amanda Fritz but that her signs were often featured alongside Sho signs. I can assume a lot from that, but what else should I know about her?

Completely agree with your sentiments/statement Jonathan, That\’s why I asked if we know more about Charles\’s views on bicycling, how he see\’s the bikes role as a transportation mode for Portland, an economic engine etc. I agree that just b/c someone rides a bikes doesn\’t mean they get it in terms of the bicycles improving health, reducing congrstion, making a city more livable etc… but it\’s one indicator that they might is all. I want to know more about where he stands on issues of bicycle infrastructure, education, enforcement and the like, if he is indeed the run off candidate. BTW, my sons take music lessons at ethos so I already directly benefit from something he started in the community.

you (and everyone else) can rest assured that I will follow this race closely.

It\’s Fritz vs. Lewis in November. Neither one has expressed any interest in transportation beyond helping motorists in this city.

Of course, if one or both candidates want to prove me wrong, now is the time for them to step up to the plate…

That\’s a little bit unfair. Amanda is a board member of the Coalition for a Livable Future and certainly understands the need to reduce dependence on autos.

I think the question is whether she appreciates that bicycle boulevards, not just bike lanes, NEED to be a basic service. We can all help educate her (including the fact that bicycle infrastructure is a much less expensive \’buy\’ than any other investment that will reduce auto use).

I think Charles\’ education may need to start at a more basic level, but I\’m sure he\’s open to having the conversation.

I\’m very sad that Jeff didn\’t win. I definitely voted for him. I\’ve heard a lot about Fritz. So here\’s what\’s floated around. On the down side she lives in Southwest (that\’s why she thinks \’bike lanes\’ not \’bike culture\’). Someone who\’s worked with her in Multnomah Village called her very NIMBY, but of course that\’s one opinion. She did vote against the Sauvie Island Bridge.
On the plus side she\’s very community oriented, she\’s been involved in City Repair for awhile, and she will be speaking Friday night at the Village Building Convergence. I don\’t think she would be a bad commissioner, but I don\’t think she would be very bike sympathetic.

I\’m basing my understanding of her policies on what she said here, on Bikeportland.

If she or Charles Lewis want to have a conversation with Portland\’s cycling voters, I think it\’s their responsibility as candidates (presumably) seeking our votes to approach us, not the other way around.

And so far, I haven\’t seen or heard much from either of them that isn\’t auto-centric.

But I appreciate your analysis of the two candidates, Chris. I only wish we\’d be having this conversation with you or Jeff Bissonnnette.

OK, so I will commit to host a forum on bicycle issues for the two candidates (not sooner than July – I need to remind my family who I am for a few weeks – plus we have the Car Free Cities conference in June).

Feel free to send suggestions for questions to me at chris@chrissmith.us.

Chris, that is a great idea– thank you for continuing to get bikes (and streetcars, if I may add) into the debate in this race, even after the disappointing results of the council elections.

Amanda and Charles have both agreed, and I\’ll be working out the logistics for an event some time in July!

That is great news Chris,and once again, thanks for going beyond the call of duty.

If it\’s any condolence, you got my vote (and I was really torn between you and Jeff Bissonnette, as were others, I suspect).

I wish Chris had won.