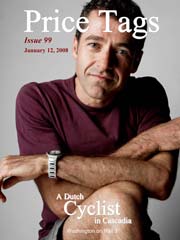 Loek Hesemans on the
cover of Price Tags.

Because of their bike-centric policies and staggering amount of bike traffic, Portland has an ongoing love-affair with Amsterdam.

So, it might come as a shock to learn that a senior health official from The Netherlands (where riding a bike is safer than taking a shower) recently came here in search of guidance and inspiration.

Back in August, Loek Hesemans — the Senior Policy Officer at The Netherland’s Ministry of Health, Welfare and Sport — made a trip to Cascadia (he visited Portland and Vancouver BC). His goal was to learn how our policymakers promote and plan for bike use, and to examine the role our bike culture plays (or doesn’t) in increasing ridership.

But wait, doesn’t everyone in The Netherlands already ride? Not exactly.

Hesemans estimates that country-wide, the number of people that ride is less than 30% — and he says, due to several factors, those numbers are trending downward.

At an presentation at Metro during his visit, Hesemans told a crowd of urban planners and bike advocates that bicycling in The Netherlands is “so self-evident to where we get complacent about it,” and that he was “impressed with the energy and the culture here in Portland.”

“I found it quite shocking to witness the negative aspects to which car-focused societies are prone.”
–Loek Hesemans

In addition to complacency, Hesemans mentioned that skyrocketing immigration rates and increasing congestion are reasons that he and other officials can’t rest on their bike-friendly laurels.

Hesemans — who told us his Amsterdam neighborhood is the most multi-cultural in the world — said that immigrants do not share the bike-nirvana upbringing of Netherlands natives and that many of them do not ride.

He also shared that auto congestion has gone up 17% since 2005 and that cars remain the “dominant form of transportation in The Netherlands.”

Amid that backdrop, Hesemans sought to learn how Portland and Vancouver, BC are doing so much with so little. He wanted to learn how, despite an extreme lack of funding, a cultural heritage that barely includes bicycles and a political environment that gives mostly “lip service” to bicycles (his words), we’ve still been able to create a bike movement.

Hesemans shared what he learned in a recently published 10-page report titled, Cycling in the Pacific Northwest (download below).

Here are a few notable excerpts.

On why he made the trip:

“Since we can no longer count on Dutch children being brought up to ride bikes as a matter of course, it is interesting to look at countries where cycling has never been a big part of life…”

“Dutch cities can learn a trick or two from North American cities…which may not boast as many cyclists, but could certainly inspire us to take interesting, less obvious steps to promote cycling, precisely because their infrastructure, public administration and culture are so different from ours.”

On our world famous car culture:

“I found it quite shocking to witness the negative aspects to which car-focused societies are prone.”

On our subculture groups:

“In some cases their purpose is to create a sense of togetherness, of companions in adversity finding support with each other…on the other hand they may put prospective cyclists off as they tend to be so ‘different’ that budding cyclists may well be scared off.”

On our political landscape:

“Many politicians now pay lip service to the importance of cycling, claiming it should be a spearpoint of transport policy. However, there is some doubt as to their willingness to foot the bill for all the steps that will have to be taken to promote cycling.”

“[Biking] is clearly a leftist thing, although it ties in with conservative North American values like independence, freedom and the ability to manage for oneself. However, it seems that the convenience and comfort provided by cars exert a stronger pull.”

For a nice summary (with photos and graphics) of Hesemans’ report, download the current issue of Gordon Price’s Price Tags Issue 99 (PDF).

Or, if you’d prefer to dig deeper, you can read the original report here (PDF).

Great synopsis. Thanks Jonathan. I especially liked the issue of Price Tags that you linked to. It was easier to read than the whole report that came out in e-mail a while back.

Interesting; maybe gas is too cheap and drivers have too many rights in Holland as well as the US. If we created a legal environment in which the most noticeable emotion of drivers was a fear of police, we might create some more new transportation cyclists. Maybe it\’d work in NL, as well.

Who is Jonathan Moss? Is he related to Randy Moss?

My sarcastic comment towards his generalization still stands, though.

Sorry for the nitpick – I just find it a little funny, because \”John Moss\” (granted, different first name spelling) is Executive Director of the Oregon Jewish Community Foundation, another worthy organization, but not very connected to Portland cycling.

Especially since pro-car mouthpieces like Terry Parker and Jim Karlock would like to see cyclists paying for that entire infrastructure. This of course ignores the massive subsidies that built the existing road network.

Interesting. I received a phone call about a month ago from an Amsterdam writer who was asking me how our Create a Commuter program worked. She was curious how we helped low income people get access to bicycles and that she thought that Amsterdam needed something similar.

I was surprised because I was unaware of the shift happening there.

“[Biking] is clearly a leftist thing….\”

Huh? In the European sense of the word, there is no left, left in this country. Look at Billary and O\’Baby, those two can barely be considered progressive and neither have any cogent transportation policy.

Loek Hesemans seems like the James Bond of bicycling… 🙂

He really did a lot of otureach; here\’s the list of people he met with:

I see that my Bakfiets-en-meer post already left a trackback link above, but its worth mentioning that Loek Hesemans has found my post and commented that the 30% figure seems to be a misquote. The figure was meant in reference to the percentage of trips made by bicycle.

I looked through some Dutch national statistics and found approximately the same figure.