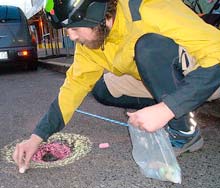 Over the weekend, Portland’s roads got a little safer thanks to a bit of effort and a bag (or two) of chalk.

Daniel Johnson (in photo) and Heather Andrews took to the streets over the weekend to literally draw attention to potholes and other road hazards. “I personally have gotten bruised ribs, a broken arm, and a concussion from pothole related accidents,” says Johnson, describing his motivation for the effort.

Daniel hopes the chalk doesn’t just warn other bike riders of dangers, but he also plans to report each one to Portland Office of Transportation. “The best way to deal with a pothole is to get it filled in,” he says, “but the second best way is to make it more visible so that people can easily steer clear of it.” 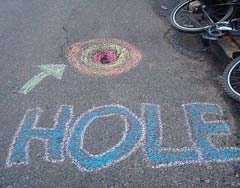 The ride started at Mt. Tabor and chalked up hazards along the popular bike routes of SE Clinton and Woodward streets.

Daniel said he got lots of smiles and curiosity from onlookers, including a few pessimists who chimed in with, “the city won’t fix that.”

You can see more photos from the ride here.

Awesome! Thanks so much.

Since they are taking the time to do this, I would suggest using spray paint for the hole part and chalk for on the surface. That way, after the first rain, their efforts are visible. Great job.

On another thought, If PDOT fixed all the potholes in the city I would get lost. Being bleary eyed at O-Dark 30 when I get on the bike in the morning, the familiar thunk of my favorite potholes keep awake and act as the landmarks of my commute.

I think my favorite pot hole is the seem at the beginning of the ramp from interstate up to the Coliseum and the Broadway bridge. How about yours?

The last one i called in at 5pm, & it was patched by noon the next day.
Coincidence?

This applies to City of Portland-maintained streets only. But here\’s a list of the maintenance numbers for other Metro area jurisdictions:

Ooo, there\’s a big one on the bike path going south on the Willamette Greenway just after Willamette Park before you come out by the little neighborhood of boat houses.

SW 6th avenue also provides a, I don\’t know if I would call it fun, challenge, that road is a disaster.

These photos are AWESOME!! I think the Safe Sound and Green streets proposal that Sam Adams is proposing will pass in a heartbeat if he uses these very fund and visceral photos to show why Portland\’s streets need funding, and lots of it!!

AWESOME! If another one of these rides happens in the springtime (aka when it\’s warmer) let us know!

I always wonder if the workers that are in charge of filling these holes, have actually ever been trained to do so. There is something to be said about weather, shrinkage, troweling, etc.. to make a hole go away, and not make it worse. Wer should develope an adopt a pothole campaign- \’cause I know I could do a better job.

Cycle Oregon uses a pattern of horizontal lines with spray paint \”leading up\” to the hole. I think that would be faster to create and would last longer. I seem to recall that th lines start wide and get narrower, essentially pointing out the hazard as you get closer.

What a great project. On another note relating to those pics. LMC looks like they have some killer custom family bikes. Any info on getting locally built bikefet? I don\’t think I need a box as big as a bathtub though.

Does anybody else have issues with crosswalk paint lines? Some of those paint strips that are laid down and melted are an abrupt 1+ inch ledge that really harsh the ride. Don’t be signaling a left turn when you hit the crosswalk at 7th and Hawthorne. 102nd and Burnside is the other spot that comes to mind.

just a thought..while painting them is a descent idea..maybe Daniel was trying to not create a stir by the city by permanently marking these potholes with graffiti…

thanks for the vigilance and time, Daniel. much appreciated, although by the looks of the current weather radar, shortlived.

Hey if anyone wants to get an announcement for the next ride send me an email, and I will put you on a list. Gmail nick surrounded in () above.

They just move \’em around so we can\’t memorize them!

I can\’t help but note how much I like the now-faded \”GRATE DANGER\” spray painted before the grate in the bike lane on Barbur just west of Capitol Hwy.

Ah with all the rain today, I\’m sure all the art has been washed away. Great project and idea Dan.

I got so tired of waiting for fixes in my neighborhood, I mixed up some cement and filled a few. It worked great.

JayS. – You can find a local workbike builder down in Eugene Oregon- Jan VanderTuin building workbikes for 15+ years. Human Powered Machines builds a Longhaul (I\’ve owned one for 10 years and love it). Check them out at: http://www.catoregon.org/hpm.htm

Also- Great project. Maybe we\’ll try this down here in Eugene too… seeing how we won\’t get the holes filled since voters just voted down any funding for road repairs.

L, I love that \’Grate Danger\’. Except they fixed the grate, and it\’s not so dangerous any more 🙂

Made the Oregonian today.