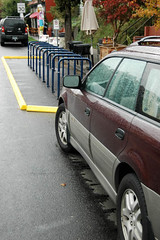 Remember Por Que No, that taqueria on N. Mississippi I wrote about earlier in the week that just installed new on-street bike parking?

I just got an email from owner Bryan Steelman. He said that in celebration of this new bike parking, he’s offering happy hour prices all day, every day through the end of October, for anyone who shows up on a bike.

So roll over to 3524 N Mississippi Ave. and take him up on the offer!

I\’m 90% confident that is my wife\’s car in that picture…reason for suspicion for sure.

Seems silly to ride my bike since I live 2 blocks away, but if it\’ll get me a good deal!

I love this place, both for the food and for the owner\’s smart vision.

Hmmmm tacos, ritas and bikes….I might just have to ride across the bridge in the rain for that!

Dan, I thought we\’d gotten the better half on a bike by now? 😉

$2 tacos, $3 beer?!? This is happy hour pricing. All our local (st. Johns) indigenous places, complete with saints on the wall are cheaper than this ALL THE TIME.

that\’s cool that you know of some cheap places up in St. Johns… but why the slam on Por Que No?

and I love that you refer to on-street bike parking as trendy!

I think their food is pricey because they use free-range, organic meats.

And yes Dan, your suspicions are correct. Your wife is driving a car and an oil war promoting SUV no less.

I\’m working on her…give it time…I\’d put her in the \”Interested but Concerned\” category…actually she usually only drives when we\’re picking things up for our car-free freinds (janis, i\’m looking at you)!

My coworker and I just rode up their for lunch. Great food, super friendly service, and fancy parking. The place gets our recommendation for sure.

I guess I miss the good old days of Portland when we where know more for flannel, rain and Gus than the Pearl. The beauty was that we had a good culinary school, cheap restuant rents, incredible access to fresh foods of all kind, a population stuck inside for 4 months a year and it resulted in a reasonably priced nirvana for the Resturant goer.

Now everything is marketed \”free range\”, \”organic\”, \”local\”, \”bike friendly\” and the prices rise. It used to be just common sense that you went to a resturant with quality food and/or lots of bike parking. Now it is an event.

Sorry Por Que No, I guess it is just my periodic rant against gentricfication / hipsterfication that in this case is apidimized by $4 tacos.

Not to nit pick, but I think you mean \”epitomized.\”

Perhaps we can become known for our spelling.

With the risk of getting yelled and slammed, I have to agree with you Spencer. BUt let\’s not become those people that lament the \”good ole days. Some changes are good and thing ARE getting better bike wise. I\’ll just go home and make myself some tacos, but maybe get a Margarita from Por Que No.

Spencer–
Is it possible to keep a subject like new bike parking and cheaper tacos free from cynicism?

Spencer,
My name is Bryan & I am the owner of por que no. I just felt like responding to your comments because I think there is a lot of honesty and integrity in what you desire.

First off I want to respond to the comparisons and conclusions you made about my restaurant. Our food is more expensive than the taquerias you are speaking of, although our tacos are not $4 like you mention (except the shrimp), and most of them are $2.50. And one of my favorite taquerias in Portland is Panaderia de Santa Cruz in St. Johns. But the reason our food costs more is probably based on many reasons, including the product we use and the wages i pay my employees. I actually don\’t know if less expensive taquerias use lesser product or pay lesser wages, but I do know that I would be unable
to run a successful business if I charged $1.50 per taco.

Also, I do not think that bike parking is trendy, in fact the bike racks that are popping up around town in parking spots is an example of a city responding to its citizens cry to make bike benefits a norm in a growing city. It also costs businesses who decide to have the corrals in front of their businesses a chunk of change. The choice is based on community rather than trendy. In fact, if you met me, i think that you would not find me trendy at all, probably closer to dorky.

All that being said, I do think we have some problems with food and prices, and the problem is that with all the money spent by our government to subsidize genetically modified crap, it makes it very expensive to grow quality ingredients the way they should be grown. So what we need is more people like you who want to bike, and want to eat good wholesome food at a good price, and want things to be the way you remember them, to talk about that sort of thing, and get other people on board to make Portland, and this world a better place. But don\’t call people out without knowing their story because that person just may be on your side.

Thanks for your passion and hopefully you can find a place in your tastebuds for some of the awesome traditional taquerias we have in this town along with por que no.
Bryan

With all due respect Bryan, these days in Portland, dorky IS trendy. 🙂

But kudos to your business for bringing bike parking to the city and for serving quality food. Much luck to you!

Bike parking = Trendy? WTF?
I stand by my claim that bicyclists are the most difficult people to please in the world. We work to be recognized, and how we complain about being trendy?

I for one have not found a reason \”por que no?\” …i Love that that place.

bryan-
i work next door. i ride my bike 4 out of 5 days. can i get happy hour pricing if i park at our bike rack?

(our bike rack is under cover)

You rule. Your tacos are by far the best I\’ve had in Portland, this deal is awesome and a great shout out to the many cyclists here, and I have a lot of respect for how you run your business. Thanks for being one of the places I bring folks when they come to town! Keep up the great work.

Of course you get the HH prices!
See you tomorrow.